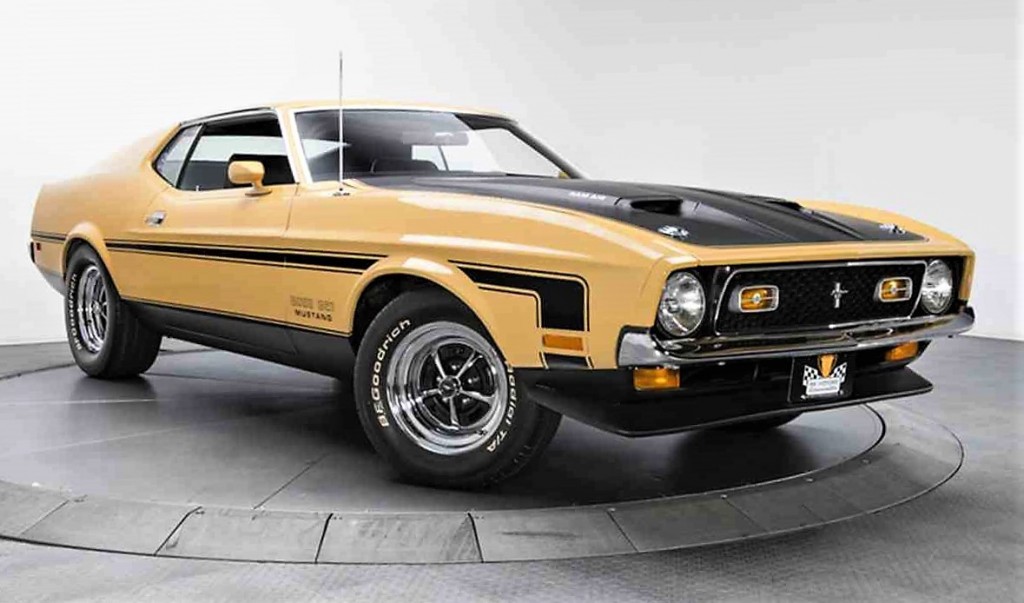 Now that we know Mustangs are the most-searched-for collector cars in the U.S., here’s a roaring example of the Ford pony car as pure muscle.

The Pick of the Day is a 1971 Ford Mustang Boss 351 coupe, the beneficiary of a ground-up restoration and powered by its correct Cleveland 351cid, four-valve V8 with Toploader four-speed manual transmission. All the ingredients needed for a hot trip down the quarter mile, on a straight-ahead back road or, if unlucky, to traffic court.

Model year 1971 was when Mustang bulked up and lost the lightness that had drawn legions of admirers, moving instead into the luxury/performance market with a bigger, heavier vehicle. The result was not to everyone’s liking, but there were some unique highlights, such as this Boss 351.

A continuation of the earlier and beloved Boss 302, as well as the Mustang Mach 1, the 351 was both an acceleration machine and a luxury transporter. This one shows a rare purity as so many of these were personalized with custom treatments. Its array of fresh paint, graphics, trim, wheels and tires, designed to attract the attention of young hot-shoe drivers, look like real time-machine stuff.

A framed Marti Auto Works Elite Report that confirms its authenticity comes with the car.

Naturally, power and performance are of primary importance, as the Charlotte, North Carolina, dealer notes in the ad description on ClassicCars.com.

“Under the car’s ‘long and low’ hood you’ll find 351 cubic inches of Ford V8 that’s been mechanically and aesthetically restored to correct factory specifications,” the dealer says in the ad. “As one of the most-popular pony-car mills ever created, Ford’s venerable Boss 351 utilizes Boss 302 heads, a radical, solid-lifter cam and shot-peened and magnafluxed rods to turn stout 11-to-1 compression into an honest 330 horsepower.

“At the top of the big engine, a 750cfm carburetor snipes wind from a restored, single-snorkel air cleaner that’s decked in a sweet combination of factory fresh decals and bright blue paint.”

The body and interior are in excellent original condition after the thorough restoration, the dealer says. Fifteen-inch Magnum 500 wheels are shod with staggered BF Goodrich Radial T/A tires for an authentic look.

Apparently in top-notch condition, this Mustang Boss 351 seems like a muscle-car jewel, and it is priced accordingly at $74,900. Though not having the panache or value of the Boss 429, it is still a great representation of the ’71-73 Mustang models. And it does look badass.

For those who were not there back then, and who wonder about such things, the word “boss” had a short-lived connotation around that time, something like the word “awesome” is used today, denoting something that is both cool and impressive. Ford picked up on it for its awesome lineup of performance Boss Mustangs.