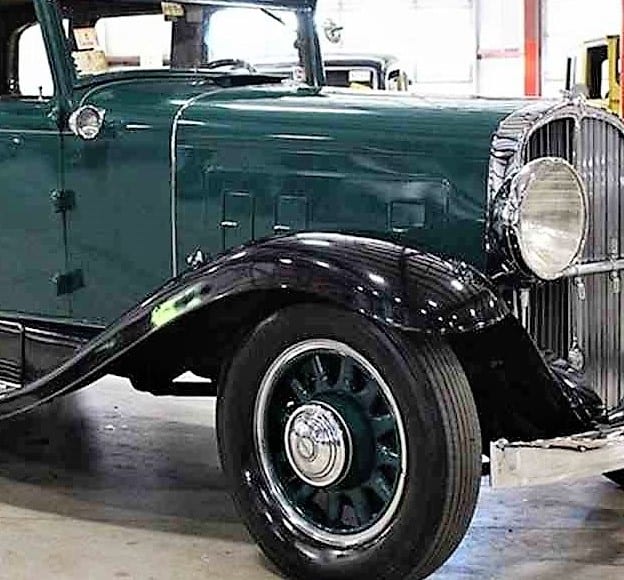 See the radiator shell on the front of this Franklin sedan? It’s a fake – there is no radiator. The Franklin Automobile Co. exclusively built air-cooled vehicles, and before the early 1920s, you could tell by the front bodywork that there was no radiator up there.

Ah, but the pressure to conform became too great, and the Syracuse, New York, automaker started outfitting its cars to look like everybody else’s, with a typical radiator shell even though there was no radiator.

The Pick of the Day is a 1931 Franklin Model 153 sedan, a formal body style housing the innovative air-cooled inline-six that generates 100 horsepower. Franklins, built from 1902 through 1934, are highly regarded by collectors of early and pre-war classic cars, and the Classic Car Club of America includes them on the list of approved classics.

This sedan is one of just 2,800 luxurious Franklins produced in 1931 as the Great Depression took hold for real.

“The company started seeing financial problems in 1927 and prices started to drop and so did profit returns,” according to the Kentwood, Michigan, dealer advertising the Franklin on ClassicCars.com. “The crash in 1929 and the Great Depression severely damaged the company.

“In 1931, the company built the Model 153 and it was to be the body that housed the air-cooled v12 engine. The hard economic times and lack of sales never allowed for this.”

So as seen here, the handsomely designed Model 153 got an inline-6 instead of a V12, but it’s a magnificent car nonetheless. The extensive gallery of photos included with the ad shows a nicely restored Franklin that would be ready to show or drive. The odometer shows just 15,329 miles, but the seller does not mention if that’s original or accurate.

“The car was sold new in Maine and restored by a Franklin Car Club member in the 1990s and then made its way to Michigan,” the ad says. “The colors are believed to be correct. The car runs great and handles as it should.

“The car rides on wooden spoked wheels with metal hubcaps. The car has a rear mounted spare with tire cover. Inside the car is in immaculate condition complete with rear window shade.”

The asking price for the Franklin is a reasonable $34,900. As a CCCA-approved classic, the Franklin would gain the next owner entry into all of the club’s nationwide activities and events.