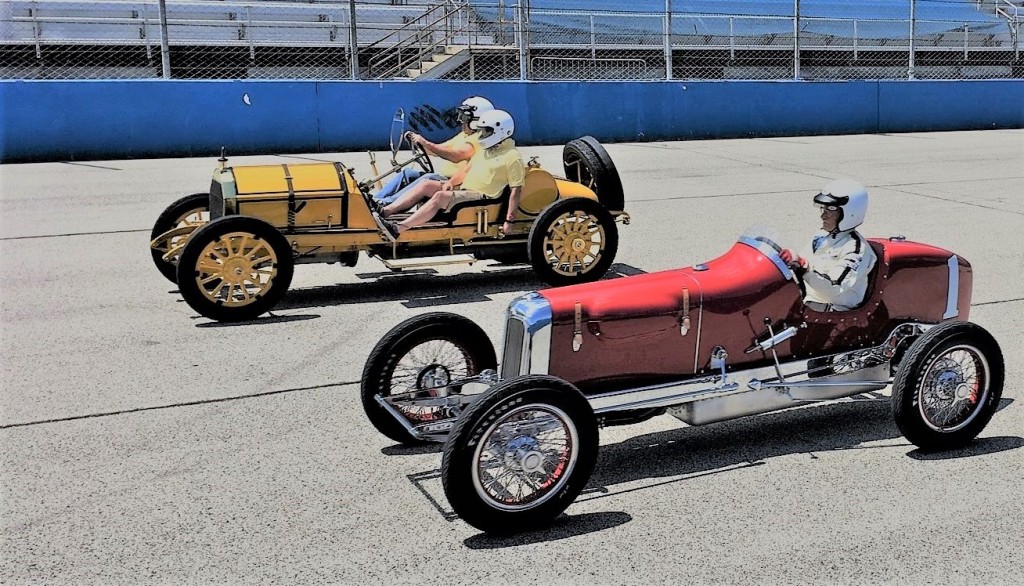 The recipe for a good motorsports event comes down to great cars in a historic venue with true enthusiasts. For 23 years, the Harry A. Miller Club has delivered that and more at its annual Millers at Milwaukee vintage Indy car event at the Wisconsin State Fair Park’s “Milwaukee Mile” oval track.

The club was founded by Schlitz brewery scion and car collector David V. Uihlein, Sr. who was challenged to form the organization by the former chairman of Rolls-Royce. The British auto executive was astonished that no one was honoring the creations of one of America’s greatest open-wheel racecar designers. Uihlein and fellow collectors took inspiration and banded together to celebrate Wisconsin-native Miller. The club continues today after Uihlein’s passing under the guiding hand of club president and auction-company owner Dana Mecum.

The Millers at Milwaukee event invites 60 Indy cars from the front-engine era – from constructors such as Miller, Kurtis and Watson – to touring sessions at the one-mile paved oval. Midgets, Sprints and pre-war Specials are invited guests. In addition to a roster of regular entries, newly restored cars make their debuts as recognition increases for these early racers.

“This is such a great, laid-back event,” Reilly said. “I know of no other event that you can take passengers in the cars around the track.”

Indeed, racecar rides are a major fringe benefit of the accessibility and intimacy of the event, where a friendly conversation with a car owner could result in a right-seat ticket around the historic track. I took advantage of a ride offered by author and Vintage Motorsport columnist Burt Levy to take Lou Natenshon’s 1933 Detroit Gasket Special for a few laps. The Flathead Ford-powered roadster affords two seats (barely) from an era of Indy cars that required riding mechanics. Levy is a hot-shoe racer and track instructor, and I had to admit to a little trepidation upon seeing him donning his full Nomex firesuit.

This car, wearing the No. 66 livery, is an example of a “Junk Formula” car; built when Indy organizers threw out the rulebook in order to stimulate competition and fill starting grids. What it lacks in refinement, it makes up for in horsepower. All of which translates into more terror for the passenger.

Suddenly I’m very self-aware of my ClassicCars.com provided firesuit – which consists of a polyester short sleeve shirt. After three white-knuckle laps, I’ve had enough, and gesture for Levy to pit. After all, what good is the story if you don’t live to report it? After some chiding by Natenshon for lifting off the throttle, Levy complains about the chattering understeer in the corners, to which he is laughingly advised to “just go faster.”

Back in the paddock, I run into a fellow fan of early competition cars, none other than Willie G. Davidson of Harley-Davidson fame. Willie has a Midget and a Sprint car in his collection, and as a renowned industrial designer he loves the style of the early cars. “Compared to the newer cars, they aren’t very aerodynamic,” he said, “But they sure are beautiful.” I ask to get a picture with him next to a car, but he insists that we get a picture together instead. As icons go, even at 84 he’s the guy you really want to hang out with.

One of the cars garnering a lot of interest was Denny Holloway’s massive 1924 Sunbeam Special. The car is powered by a 12.27 liter, gear-driven four-cam V12 Maori aircraft engine, which was formerly used in WW1 British aircraft. The engine features four valves per cylinder and 650 pounds-feet of torque, pulling the car around the track nicely with as little as 1,000 rpm. Made in 1917, it’s one of two such running examples of this engine left in the world. The car was constructed by Wallace McNair of New Zealand from period pieces.

I’m offered another ride, this time in a 1932 Alfa Romeo 8c2300 Zagato. The precision and refinement of this car around the track stood in stark contrast to the Flathead Ford, especially under the skilled hand of driver Gordon Barrett. The long-wheelbase chassis sticks like glue in the turns, and we are able to achieve an impressive 120kms (75 mph) on the straightaways without much effort. After the ride, I can’t help but comment about risking such a valuable car on the track.

“You know, I just don’t think about it,” said Barrett. “These cars are just made to be driven and enjoyed.”

If the Millers at Milwaukee event does anything, it’s to spread that enjoyment as widely as possible. The Indy car owners at the event have made it their mission to share and propagate their passion with all participants.