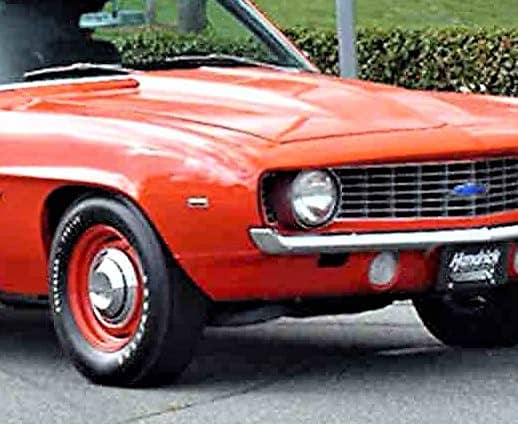 Ever since I wrote about the 1969 Chevy Camaro ZL1 COPO coupe at Mecum’s upcoming Denver auction, I’ve been thinking about ’69 Camaros with big-block engines. The authentic ZL1 is the featured highlight of the auction, expected to go for north of a half-million dollars.

The COPO Camaro is a legendary creature, a back-door effort by gearhead insiders at GM to defy the corporation’s racing ban and create a handful of cars with outlandish performance capabilities. Just 69 COPO Camaros were built in 1969, with only a few remaining in original condition.

For those of us without $500k to spend on a rare acceleration toy, there are any number of Camaros that have been rodded to replicate the style and performance of the ZL1. The Pick of the Day is a 1969 Chevrolet Camaro coupe that has built to the specifications of the ZL1 and offered by a well-known Chevy dealer in Charlotte, North Carolina, for a fraction of the cost of an actual COPO.

Painted in the correct factory shade of Hugger Orange – just like the Mecum auction car – this Camaro has been built up into a reasonable facsimile of a ZL1, complete with a ground-pounding 427 cid V8, rated conservatively at 425 horsepower, mated with a Muncie four-speed manual transmission and 12-bolt rear with 3.73 gear ratio. The seller notes that the car “has been restored to an exacting COPO standard.”

“When built new at the Norwood, Ohio, Chevrolet factory, this coupe crossed the assembly line in the iconic Hugger Orange color,” according to the ad on ClassicCars.com. “The recent professional rotisserie restoration included all-new sheet metal and resulted in a laser-straight body which was then re-painted in the classic orange hue.

“The Camaro rolls on factory-style steel wheels with Goodyear Polyglas tires and front disc brakes,” the dealer adds. “The correct dual exhaust makes all the right sounds, and the fully rebuilt suspension keeps the car planted on the road.”

I love the no-nonsense look of these high-performance Camaros, with their simple dog-dish hubcaps and without extra trim or ornamentation. Understated but aggressive-looking in their stance and that bright-orange paint.

The COPO Camaro clone is priced at $69,990, certainly not cheap unless you consider what the real ones go for. For that, you get the look and the go-fast equipment in a car that’s not too-valuable to drive.

Take note that the dealer says the Camaro will be going to a collector car auction at the end of this month unless it’s sold beforehand.