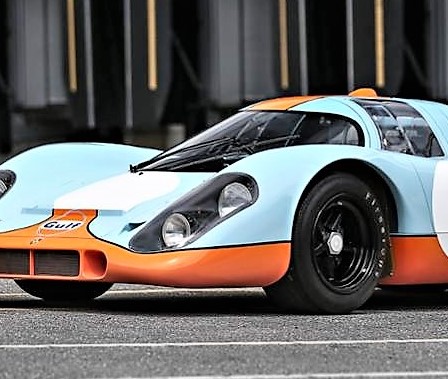 As well as being one of the most-formidable sports-prototype cars from a fascinating era of Le Mans endurance racing, the 1970 Porsche 917K to be offered at Gooding & Company’s Pebble Beach auction in August boasts a colorful history of motorsports-celebrity ownership and barn-find splendor.

The Porsche also possesses that most-magical ingredient of Hollywood stardom, having appeared in Steve McQueen’s epic 1971 film, Le Mans. Not only did it serve as a camera car in the making of the film, the Porsche stars on screen at speed as car No. 22 in the action sequences.

Recently restored by Swiss specialist Graber Sportgarage, the 917K wears the iconic orange-and-blue Gulf JWA racing livery as it did in the film, which tracks the story of the 24 Hours of Le Mans race starring McQueen as fictional driver Michael Delaney.

“The Porsche 917 is among the most significant competition cars ever created, and they remain highly coveted by knowledgeable enthusiasts worldwide,” David Gooding, president and founder of Gooding & Company, said in a news release. “This example, with its fascinating history, iconic livery and exacting restoration, is among the most exciting racing cars that has ever come to public auction.”

The 12-cylinder 917K, chassis No. 917-024, was used by Porsche in 1970 Le Mans testing driven by Brian Redman and Mike Hailwood to determine whether the new design would be capable of winning the 24-hour endurance race. Redman set the fastest time during testing, and two months later, a factory 917K won Le Mans, the first overall win for Porsche. The following year, a 917K was again the winner.

After a number of other test sessions by Porsche, No. 917-024 was sold to famed racing driver Jo Siffert, who shortly thereafter leased the car to McQueen’s Solar Productions to be used in Le Mans. The original plan was to have the actor drive the car during the filming, but after McQueen’s insurance company objected to the marquee screen idol endangering himself behind the wheel of a 560-horsepower 917, capable of 200 mph, Porsche factory driver Herbert Linge was enlisted to perform the track scenes.

Following the making of Le Mans, the 917K was returned to Siffert, who intended to use the car in subsequent competitions. But not long after, Siffert was killed in a crash at Brands Hatch in October 1971 when the front suspension of his BRM failed after making contact with another car.

Siffert’s funeral was a huge affair reportedly attended by 50,000 people. The funeral procession was led by this 917K.

No. 917-024 was sold in the mid-1970s to a private collector, who stored the car in a warehouse outside Paris for a quarter century, long-forgotten and untouched.

The Porsche was rediscovered in 2001, missing its original flat-12 5.0-liter engine and infested with rats. Still, its re-emergence in remarkably original condition is regarded as one of history’s greatest single classic car “barn finds.”

The Porsche was restored at the time with a period-correct 917 engine while keeping intact its major components. The car originally was slated for Gooding’s Pebble Beach auction in 2014, but it was pulled from the sale two weeks ahead of time for unreported reasons.

The 917K was re-restored this year by Graber Sportgarage and, owned by a private European collector, it will appear at the Pebble Beach sale, held August 18 and 19. The Porsche has a pre-auction estimated value of $13 million to $16 million.

“This is surely one of the most correct and significant 917s in existence and easily one of the finest racing cars ever to come to public auction,” Gooding says in its news release. “The offering of 917-024 is a momentous occasion and the opportunity to acquire a car of this stature is not to be missed.”

For information about the Pebble Beach auction, visit Gooding’s website.