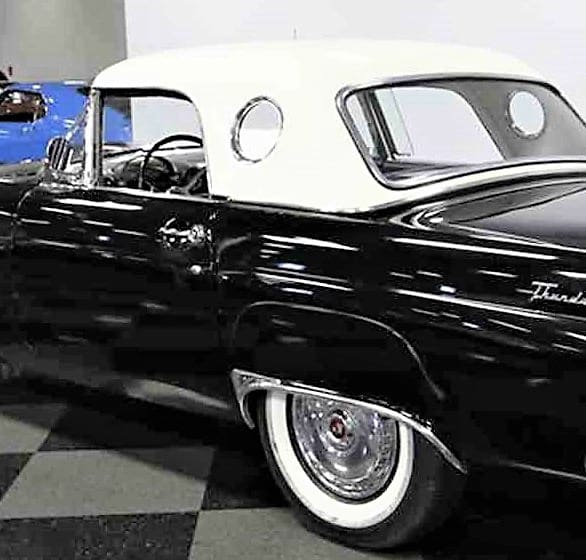 Less than a year after the death of Frank Sinatra in 1998, Barrett-Jackson auctioned off in Scottsdale the impeccable silver-gray 1956 Ford Thunderbird that the legendary crooner drove around Palm Springs, California, when he was not off with the rest of the Rat Pack.

Two-seater Thunderbirds, made for just three years in 1955-57, were just beginning to fade after many years as popular staples of the collector car world. But this one was special enough that it sold for more than $160,000, probably more-than four times what a non-celeb T’bird would have sold for at the time.

The sale of the Sinatra car became something of a last hurrah for two-seater Thunderbirds. Since then, their values have stayed fairly flat as tastes and generations changed, still emblematic of the mid-’50s and still cherished by many, but staying fairly affordable.

The Pick of the Day is a 1956 Ford Thunderbird in all its glory: continental-kit spare hanging off the rear, the porthole hardtop that seemed so exciting back then, the bullet-like bumper guards, and a gleaming black paint job that would have met with Sinatra’s approval.

“There’s nothing more beautiful than Ford’s personal coupe in black and chrome,” says the seller, a Concord, North Carolina, dealer advertising the car on ClassicCars.com. “The high-gloss finish on the factory correct code-A Raven Black is like true formal wear. In fact, the way the black combines with the whitewall tires and iconic porthole hardtop, this is like driving a tuxedo.”

The Thunderbird is powered by a 312cid V8, the bigger of the two engine offerings that year, hooked up with the three-speed automatic transmission, just the right combo for boulevard cruising. The odometer reads just 17,405 miles, according to the ad, although there is no explanation for the ultra-low mileage, or whether the odometer has flipped past six figures.

The sleek roadster looks very clean and fresh in the photo gallery with the ad, and the seller says the engine is believed to have been rebuilt at some time. The Thunderbird runs well and is ready for a night on the town, the seller adds. Or maybe serve as a cozy and comfortable road-rally car.

The modest asking price of $36,995 is about what a decent-condition ’55-57 Thunderbird has gone for during the past decade, with perfect show-quality examples valued at maybe twice that. This one seems like a good deal for such a cool blast from the past.