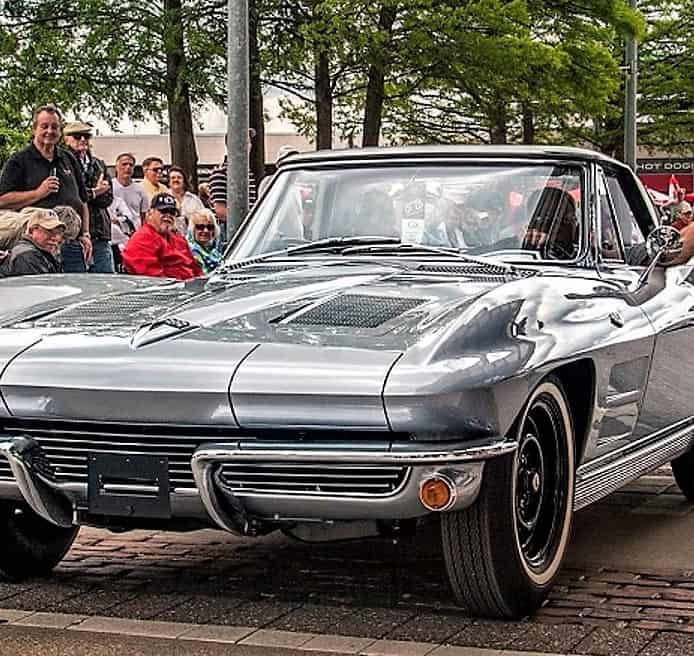 Bloomington Gold, the longest-running all-Corvette show in the nation, stages three days of events Thursday through Saturday at the Indianapolis Motor Speedway, featuring judging for prestigious awards, an autocross and other competitions, and Corvette laps around the iconic Brickyard oval.

Corvette enthusiasts from all over the world are expected to attend the gathering, which has been held every year since 1973. Since then, Bloomington Gold has become the benchmark for Corvette excellence with intensive judging to the highest standards for Corvettes vying to achieve Bloomington Gold Certification ratings for authenticity.

Corvette fans also are treated to a broad range of shows, vendors, dealers, swap meets, workshops and car corrals of Corvettes for sale.

A special display this year brings together for the first time three generations of “see-through” Corvettes, cutaway show cars from 1953, 1965 and 1969.

For information about Bloomington Gold, visit the event website.

Thirty-five historic automobiles are slated for the show, including such classics, sports cars and race cars as a 1967 Lancia Fulvia Sport, a 1957 BMW 507 roadster, a 1930 Packard 745 convertible coupe and an award-winning 1926 Sprint racing car owned and restored by former Philadelphia Eagles coach Dick Vermeil.

All proceeds from the first-time event benefit Cool Cars for Kids. which provides for families of children with birth defects and supports medical research into causes and treatments.

For information about the Philadelphia Concours, visit the event website.

A famous and highly unusual Maserati A6G 2000 Gran Sport Berlinetta Frua has been signed up to star at the Concours of Elegance, set for September 1 at Hampton Court Palace in London, England.

The Maserati was part of a world-famous classic car discovery, the Baillon Barn Find in rural France, where in 2014 a cache of about 60 vintage European automobiles, many of them rare and priceless, were found on a farm property in derelict condition after decades of neglectful storage.

Among the prestigious brands represented in the barn-find collection were Bugatti, Hispano-Suiza, Talbot-Lago, Panhard-Levassor, Maserati, Ferrari, Delahaye and Delage.

The find is named for Roger Baillon, a French trucking magnate who brought together the collection of exceptional vehicles with plans to establish a museum, which never came to pass.

The Maserati A6G with coachwork by Frua was one of the stars of the treasure trove. The sports car has been recommissioned to run again but remains in as-found condition, providing aesthetic testimony to the grandeur of the Baillon find.

For information about the Concours of elegance, visit the event website.

More than 100 vehicles earned class honors and other special-recognition awards at the show, which included a new category for Japanese manufacturers; a 1967 Mazda R360 microcar won that class.

The premier annual event held June 9-11 at the grand Hotel Hershey in Hershey, Pennsylvania, featured a number of vintage-car happenings, including the Grand Ascent hill climb, Cars and Coffee gathering and the weekend’s concours d’elegance, known as the Elegance Garden Party.

Another special winner at Hershey was Ralph Marano, who received the Olympus Award. The New Jersey resident, well-known among car collectors and a frequent guest on Chasing Classic Cars with Wayne Carini, was honored for his lifelong enthusiasm for great cars from our automotive past and his willingness to share the hobby with others.

For information about the Elegance at Hershey, visit the event website.