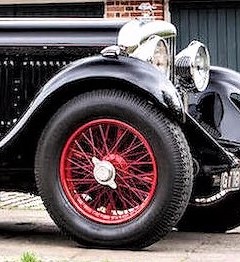 The 1931 Bentley 8-Litre Sedanca de Ville is a palace among motorcars, a royal barge powered by a massive 488-cubic-inch inline-6 that could transport its pampered occupants at more than 100 mph despite its heavy formal coachwork.

The Bentley, the sole remaining example of six Sedanca-bodied limousines built that year, will roll majestically across the auction block June 30 during Bonhams’ collector car and automobilia auction held at Goodwood House during the annual Goodwood Festival of Speed in England.

Eighty-five vintage British, German and Italian vehicles –- plus a Ford Mustang,  a Chevrolet Corvette and a Pontiac GTO –- will be auctioned during the sale, along with a horde of automotive collector items that include mascots, models, toys, picnic hampers, radiator shells, signs and artwork.

The Bentley 8-Litre, with coachwork by H J Mulliner and originally owned by Lord Brougham & Vaux, is richly furnished like a drawing room at the Lord’s estate, with luxurious wood and leather fittings and such appointments as a cocktail cabinet, vanity unit and fold-away occasional seats.

Despite all that, the 8-Litre was the fastest Bentley model built until the 1950s, and was known for traveling over 100 mph in nearly complete silence.

The Rolls was owned by an Indian ‘king of kings’

Another piece of royalty from an earlier era is the 1914 Rolls-Royce 40/50hp Silver Ghost Open Tourer that was originally owned by His Highness the Maharana (meaning king of kings in Hindi) Sir Fateh Singh Bahadur of Udaipur, India.

After leaving His Highness’s ownership, the Rolls from Rajputana, as it became known, was widely traveled among owners in Pakistan, South Africa and the U.K. It was totally restored to its original Hooper-body configuration four years ago, according to Bonhams, and is said to run as smoothly as it did more than a century ago. The Rolls is valued at £300,000 to £400,000 ($382,000 to $510,000).

Vintage sports cars will be prominently featured at the auction, led by a historic Aston Martin Db MKIII that was a prototype of the production model to first wear Aston’s signature grille.

The ’57 Aston prototype was raced at Monte Carlo

For information about Bonham’s Goodwood sale, visit the auction website.