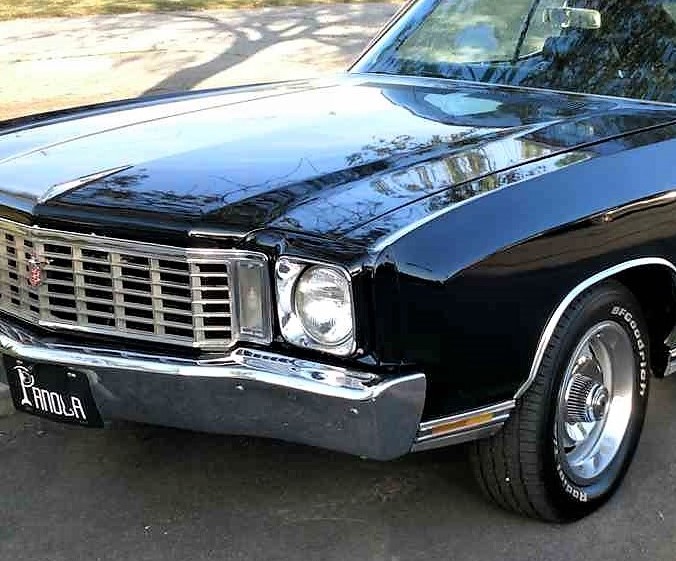 Here’s a sleeper they’ll never see coming, a 1972 Chevrolet Monte Carlo that looks more like a disco-era bar crawler than a performance machine. Despite appearing attractively stock, this “personal luxury” coupe is packing a high-performance 383 stroker V8 under its hood, linked with a Turbo 400 automatic.

That should make for some quick getaways from the stoplight. The private seller in Charleston, South Carolina, advertising the Chevy on ClassicCars.com says the engine and transmission were professional built, and that the car is currently used as a daily driver.

“I wouldn’t hesitate to take it anywhere,” says the seller, who calls the Pick of the Day a “remarkable car.”

“Original interior is in awesome shape!” the seller adds. “It does have a few minor blemishes in the paint and interior but nothing major. Paint is in good condition. No rust, dents or bondo.”

The black-on-black Monte Carlo looks very clean in the photos; as well as nice paint and interior, the vinyl top – a favorite of the period – has been removed and the steel roof refinished. A good choice that improves its already-stylish appearance.

The gleaming Chevy is set off with rally-type wheels, which would be correct for this time, with a “wider wheel in rear to give it more of a mean look,” the seller says. There is a Kenwood audio system with a CD player tucked out of sight in the glove compartment (what, no 8-track?).

The engine compartment looks super clean. The air-conditioning system has been removed for whatever reason, which would be bad news for those of us sweltering in hot climates. One would think that AC would be beneficial in steamy Charleston.

This clean and performance-tuned Monte Carlo seems like a bargain at $19,000. These Chevys were hugely popular in their day and still sought-after, primarily by those in the lowrider hobby. But it would be a crime to change this one in any way, except maybe calling up Vintage Air to install AC.