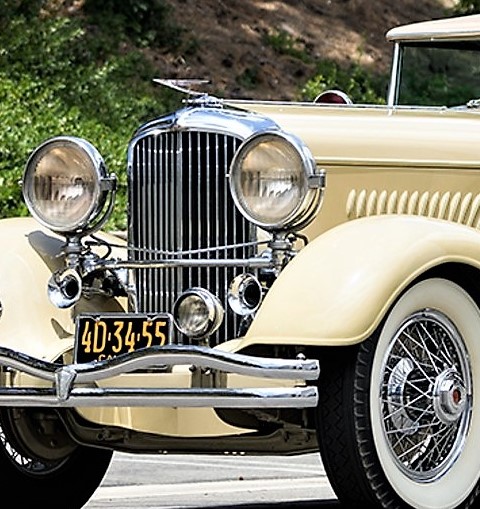 Santa Monica is at the heart of Southern California beach culture. It has the famous pier, aquarium and surfing tradition, as well as its fun-in-the-sun collector car scene. But it’s not just about old woody wagons and VW microbuses.

For the past five years, Auctions America has brought a summertime car auction to Santa Monica to feed the longings of a diverse group of car collectors. But this year, the footprint has expanded with the parent auction company, RM Sotheby’s, moving in and raising the bar for the car offerings.

RM Sotheby’s will present a one-day sale of about 170 cars on June 24 at a historic Santa Monica location, Barker Hangar. As well as the collector cars, there is a bunch of automobilia collector items that will be auctioned.

The famed Lincoln-Zephyr custom creation named Scrape will be auctioned

Featured at the auction will be American pre-war classics; hot rods, customs and resto-mods; European sports cars and classics; and yes, a 23-window Volkswagen microbus from the 1960s.

The big classics are led by a magnificent cream-colored 1929 Duesenberg Model J Convertible Berline that is steeped in California history. With a body by Murphy coachbuilders of Pasadena, the grand machine was originally owned by wealthy playboy Arthur K. Bourne, heir to the Singer Sewing Machine fortune, who first spotted a Model J while golfing at Pebble Beach, according to RM Sotheby’s description.

The car retains its original custom equipment specified by Bourne, including a full-size home radio, a secret compartment under the driver’s seat, Mercedes-Benz Zeiss headlights and a police siren. In 1934, Bourne had the car modified with a lowered stance, skirted fenders, redesigned running boards, a metal trunk and a longer radiator for mountain and desert driving.

The car has gone through several owners, including CCCA president Richard Gold, who retained the car for more than three decades before selling to the current owner. The Duesenberg was never fully restored and comes to auction in largely pristine condition. The pre-auction estimated value is $800,000 to $950,000.

A classic car highlight is the 1930 Cadillac V-16 Roadster by Fleetwood, a two-passenger model accessorized with Pilot Ray driving lights, cowl-mounted spotlights, dual horns, Goddess mascot and a period luggage rack. The estimated value is $450,000 to $550,000.

Among the custom-car offerings is the famous 1939 Lincoln-Zephyr named Scrape that moved forward the Streamline Moderne trend in custom coachbuilding near the close of the 20th Century. Created by Hot Rod magazine editor Terry Cook and builder Ramsey Mosher, Scrape was so-named because of its air-bag suspension’s ability to rest the car’s body right on the pavement. The estimated value is $300,000 to $400,000.

This being a Southern California sale, there is an offering connected with the late actor Steve McQueen, an iconic presence in the collector car hobby. This one is a 1965 Lincoln Continental Executive Limousine by Lehmann-Peterson, one of 15 produced that year and with documented ownership by McQueen. The value estimate is $100,000 to $150,000.

The 1960 VW microbus has been resto=modded for modern driving

Another California celebrity car is the 1970 Mercedes-Benz 250 C purchased new from Hollywood Mercedes by Michelle Phillips of The Mamas and the Papas, and still owned by the singer-turned-actress. The Mercedes will be offered at no reserve, valued at $20,000 to $30,000.

And yes, the VW microbus is a 1960 charmer that has been resto-modded with a 2.1-liter, 120-horsepower air-cooled engine, “freeway flyer” 4-speed transmission for mellow highway cruising, four-wheel disc brakes, Budnick wheels and adjustable ride height. Estimated value is $100,000 to $130,000.

For more information on the Santa Monica auction, visit the RM Sotheby’s website.