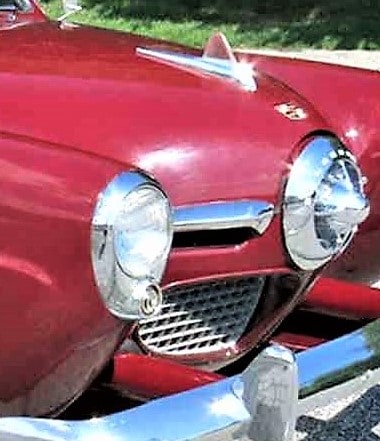 The Studebaker Champion got a bullet nose for 1950

One of the most distinctive cars of 1950 was the “bullet-nose” Studebaker Champion, an effort to set itself apart in difficult times by the venerable company that started out making covered wagons.

The Champion was designed when all the major automakers were experimenting with post-war “modern” styling. Studebaker was struggling against the Detroit Big 3, but it did have an ace up its sleeve: famed industrial designer Raymond Loewy, the guy who made everything from toasters to locomotives look cool.

The Champion was a Hail Mary pass by Studebaker to become relevant again. The model had been introduced in 1946 with the Loewy body style and a more-conventional front end. The design  was highlighted by the Starlight Coupe with rear glass that swept around to the B pillars, though it was criticized for looking like you couldn’t tell whether the car was coming or going. The original “Push-Me, Pull-You” of automobiles.

The Pick of the Day is a nicely restored example of the 1950 Studebaker Champion Starlight Coupe, finished in period-appropriate burgundy paint and looking good all around. The styling is still an acquired taste today, but there are many collectors who love its quirky appeal.

The unique bullet-nose arrived in 1950 and was controversial from the start. But enough buyers were excited by the radical new look that Studebaker was able to cash in and stay afloat. Apparently, the original design plan was to have a third headlight in the snout that swiveled with the steering, but that was deemed too expensive for the modestly priced car, and the nixed headlight became instead a chrome styling feature.

This Studebaker coupe was treated to a full restoration with just over 3,000 miles put on it since, according to the West Chester, Pennsylvania, dealer advertising the car on ClassicCars.com. These cars are often seen nowadays transformed into exotic custom street rods, so an accurately restored one is something of an anomaly.

The Studey looks sharp in the gallery of photos with the ad, including the conservative gray-cloth interior that was standard in its day. The car is powered by its original 170 cid side-valve inline-6, good for 85 horsepower, linked with three-speed manual transmission and rare overdrive for relaxed highway travel. The car is fully equipped with factory features and has been fully serviced and is ready to go, the seller says.

The asking price of $21,500 seems reasonable for such an interesting relic that has been completely refurbished. Studebakers are generally reasonably priced collector cars despite a strong cadre of enthusiasts; the next owner will find very good club support with lots of folks available to help out with parts and advice.