Rainy day memories with the Davidsons 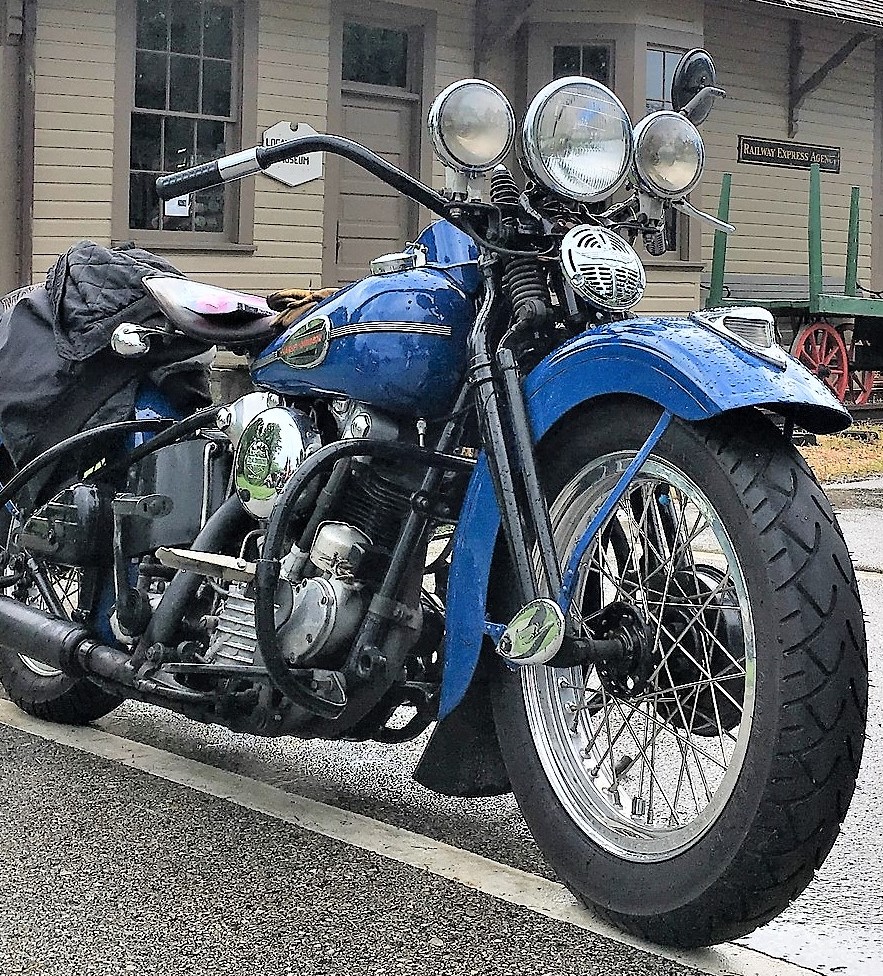 Every now and again, weather interjects itself into the best-laid plans of the vintage motorcyclist. Experienced riders know to take the hint; oftentimes the universe is aligning a different experience, and a sudden downpour is merely the suggestion that one should be open to the unexpected.

Such was the case while attending a recent event held by the Badger Heritage Chapter of the Antique Motorcycle Club of America in Menomonee Falls, Wisconsin. Heavy rain was predicted all day, but I still obligingly attended because I knew the organizers would be there working hard, rain or shine. Besides, most antique motorcyclists are a plucky bunch (“Weather? Hell, that’s the least of my worries.”)

Luckily for me, the gathering indeed turned out to be somewhat intimate, as I spent the afternoon sitting on a beer cooler under a leaky portable party tent, listening with rapt attention to Jean Davidson and her son, Jon Davidson Oeflein, recount stories from their family lives and the little motorcycle company their forefathers founded.

Yes, “Davidson” as in “Harley-Davidson”; Jean’s grandfather was Walter Davidson, one of three brothers who along with William Harley founded the legendary Milwaukee motorcycle company in 1903.

We were huddled in the parking lot of what was once her grandmother’s country estate, a cozy home where she liked to display her antiques and host her ladies-only card games. Now a preservation site with other historical structures, it sits less than a mile from H-D’s newest Pilgrim Road Powertrain Operations plant.

Jean gave me an insider tour of grandmother Emma’s house, listening patiently to docents dressed in period costume recount stories of her family’s past, while whispering anecdotes in my ear about sliding down bannisters and hanging from balcony ledges as a child.

If at this point you are getting envious of this writer’s unfiltered access to this fascinating American family, fear not. Jean and Jon have dug deep into their archives to co-produce a book called Harley-Davidson Family Memories (167 pages, Octane Press), that makes you feel as if you are leafing through a personal photo album of some fabulous extended family, albeit a famous one.

The book is an easy and entertaining read, with more than 250 photos and documents accompanied by mother and son recollections and back story of each picture.

A turn-of-the-century photo of founding brother and patternmaker Arthur Davidson is unusually informal, with he and his three co-worker’s heads threaded through the spokes of a large industrial wheel. Just above Arthur stands friend Ole Evinrude, who would go on to create a successful outboard motor company. Ole reportedly invented the device to shorten his transit time to a girlfriend who lived across the lake from his home.
Evinrude is just one of many historical personalities who are woven into the family history within this book.

Jean’s branch of the family transitioned from manufacturing to retail, when in 1969 she and husband John bought Wisconsin’s largest Harley dealership just in time to catch the industry downturn. You can almost feel the buyer malaise in photos taken of the showroom floor during the infamous AMF-ownership period, when the dealership took on Artic Cat snowmobiles to augment the bottom line. Of course, original bikes from that era are now highly prized.

Jon points to one of his favorite entries in the book, a handwritten letter to his parent’s motorcycle dealership, inquiring if there is a model “under 200cc, especially for long trip on the highway, that a girl 5’3” 110 lbs. could handle?” The letter continued, “I’m running away and can’t afford much – but then again I have a rich father.”

Photos of Jon and siblings as children attending a 1971 Evel Knievel indoor motorcycle jump in Chicago recount Jon’s conversation with the stuntman before his harrowing leap. “Evel Knievel was a true daredevil and lived on the edge,” Jon wrote. “I am not sure the world will see too many more guys like him.”

Early photos of cousin Willie G. Davidson are in there, too, as a buttoned-down, short-haired and clean-shaven H-D draftsman – years before he became the bearded and beret-wearing ambassador of the brand.

Apparent throughout the book is a strong love for family, brought together through their shared passion for motorcycling. It could be any active motorsports family’s memoir– but in this case, they just happened to own the company.

And what about Grandma Emma? Not content to stay at home while husband Walter built their motorcycle empire, she traveled the world in inimitable style, surviving the sinking of the Andrea Doria and toasting her good fortune in a photo from Jean’s wedding day. Another great character brought to life in this intimate look at one of America’s great industrialist families.