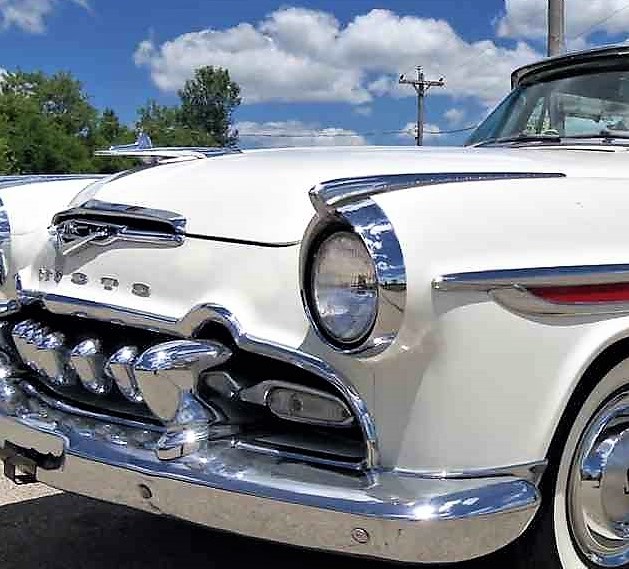 Chrysler introduced the Fireflite in 1955 as the top-of-the-line model for the restyled cars of the premium DeSoto division, lavishing it with chrome accents, exotic styling details and modernistic features.

The Pick of the Day is a 1955 DeSoto Fireflite Sportsman hardtop in two-tone red and white, and looking very clean in the photos with its ad on ClassicCars.com. Like most U.S. cars of the era, the two-door hardtop version best shows off Fireflite’s expressive styling, and the Sportsman package adds another layer of trim.

“What a great style!” says the seller, a dealer in Jefferson, Wisconsin. “The two-door hardtop roofline almost appears to be chopped! This car looks fast while standing still.”

The DeSoto is equipped with an early version of the Hemi V8, which had not yet reached its potential as a big-block, NASCAR-winning performance engine. Still, the 291-cubic-inch Hemi was a strong runner with about 200 horsepower, which gave the big DeSoto decent acceleration and top speed.

“This was a very strong engine for the time,” the seller notes. “It starts and runs great, especially since a new Edelbrock carburetor was installed. It sounds great through dual exhaust.”

The Powerflite automatic transmission works well, according to the ad, with 1955 being the last year for the quirky shift lever that sticks out of the dashboard. Power brakes and power steering have been added by a previous owner to improve drivability, the seller says. The car rides on newer but still bias-ply whitewall tires.

While the paint and exterior trim are older, they look very presentable with nice chrome and glass, the seller says, and the body is in solid condition after years as a southern car. The interior was completely restored and remains in good condition. Everything works aside from the radio.

DeSoto’s restyled cars were a great success in 1955, scoring the best year for the division in a decade. But DeSoto’s days were numbered, as Chrysler discontinued the brand in 1960.

The DeSoto is priced at a reasonable $17,995 for a stylish hardtop that will stand out from all the ’55 Chevys and Fords. Besides, the new owner will be able to brag about the Hemi under the hood.