Classic Cadillacs in muddy field and other road-trip observations 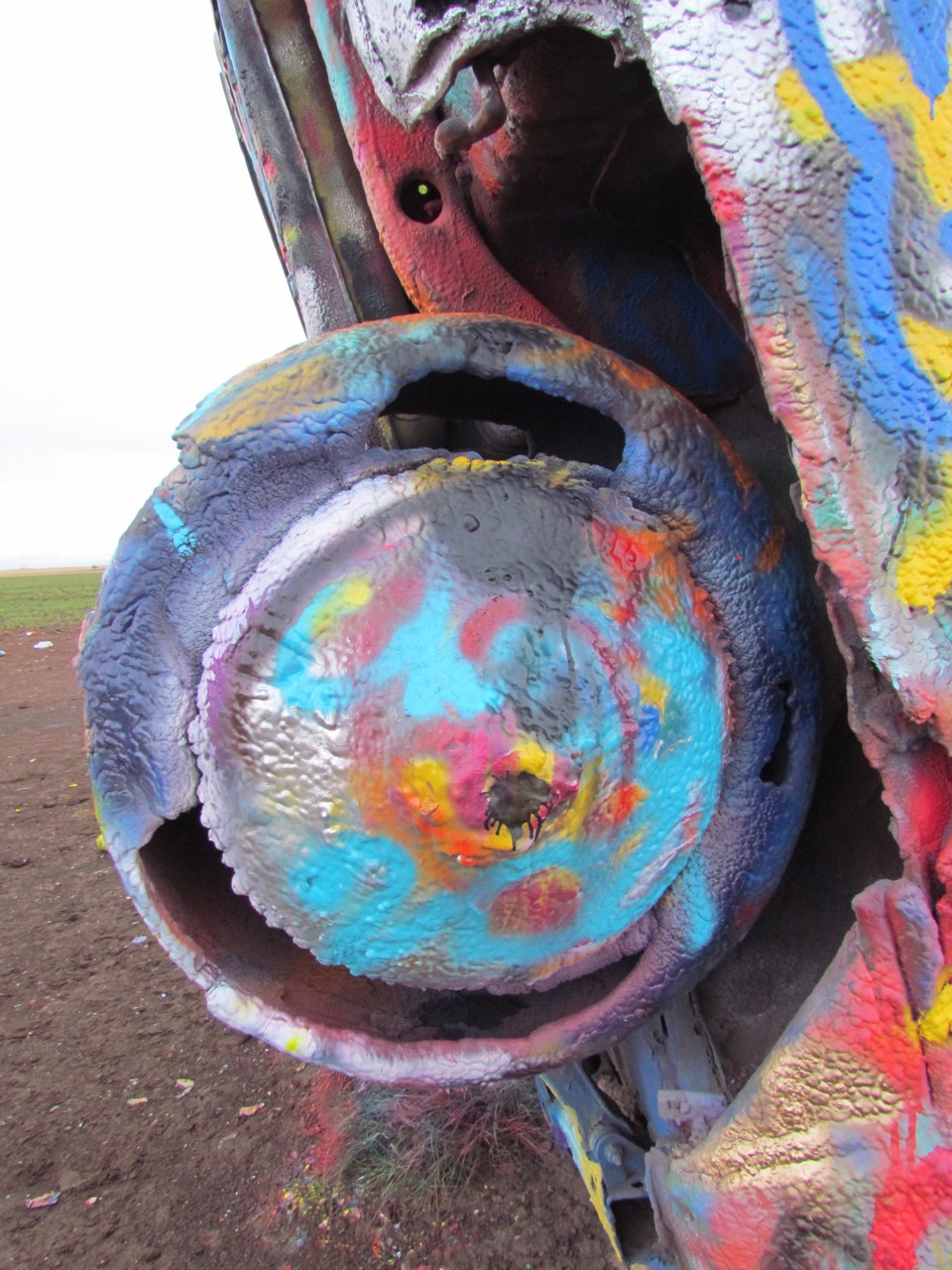 The family that paints together… | Larry Edsall photos

What is it about Cadillac Ranch that refuses to allow me simply to zoom past on Interstate 40, that draws me off the super slab and onto the frontage road, to park beside the road and to walk through the cow-catcher gate and out into the farm field west of Amarillo, Texas, where 10 vintage Cadillacs — from a 1949 Club Coupe to a 1963 Sedan DeVille — are buried nose-down, though at a very precise angle?

Unlike seemingly every other visitor to the site, I’ve never picked up one of the spray paint cans, shook it so its BB stirs the pigment inside and then added color or my name or anything else to the coats of paint that cover the cars. So much paint that I sometimes wonder if there’s anything actually left of the cars themselves, or if it’s simply the layers of paint that retain the shape of vehicles that rusted away years ago.

But I’m fascinated by this place, this automotive art installation, and how it’s different but the same each time I arrive, which seems to have been an annual event for much of the past decade. Same field. Same cars. But different colors added by different people.

Mucky mess on soles, and souls

Amarillo had had something like three inches of rain in a couple of hours before I arrived around sunset one evening last weekend and the field was a muddy mess. But that didn’t deter visitors, though I was very glad I’d brought along a spare pair of shoes and didn’t have to track into my truck the inch or so of mucky mud and rock that clung to my soles, and in some ways to my soul itself, when I returned to the truck to continue my journey.

I find both beauty and sorrow at Cadillac Ranch. The installation used to be a few miles east of here, closer to town, but as Amarillo grew, the cars were moved. That happened in 1997. They originally were planted in 1974, at the behest of local rancher, oil tycoon, art patron and helium magnate Stanley Marsh 3, positioned by the Ant Farm art collective from San Francisco so their tailfins pointed to the heavens at the same angle as Egypt’s great Cheops Pyramid.

The cars serve as canvases for public graffiti, and I wonder how parents explain to their children that it’s OK to spray paint on these cars, and then to simply drop the paint cans on the ground, but not to deface the buildings or cars or to liter when they’ve returned home.

My most recent visit to Cadillac Ranch came at the end of first day of a 2,100-mile drive from the Arizona desert to the woodlands of northern Michigan. I spent most of that opening day on two-lane roads, my favorite way to travel, in part because I pretty much have those old roads to myself, in part because you’re not just traveling through the landscape but actually involved with it. However, it was sad to see how so many small towns appear to be dying off, with abandoned homes and with buildings along main streets falling down around the FOR SALE signs tacked to doors or windows.

The second and third days of my drive were done on interstates, where the big rigs rule and where landscape is a blur. Speaking of semi traffic, have you ever noticed that trucks that say “Swift” on their sides never are?

Other than the St. Louis arch, and the historic Route 66 signs and occasional classic car dealerships and automotive graveyards that kept tempting me to detour from the superhighway, the two most interesting things I saw on the interstates were what I thought was a high-class horse trailer that turned out to be hauling show pigs, and signs in Missouri that noted that of more than 300 people who have died in crashes in that state already this year, two-thirds were not wearing seat belts.