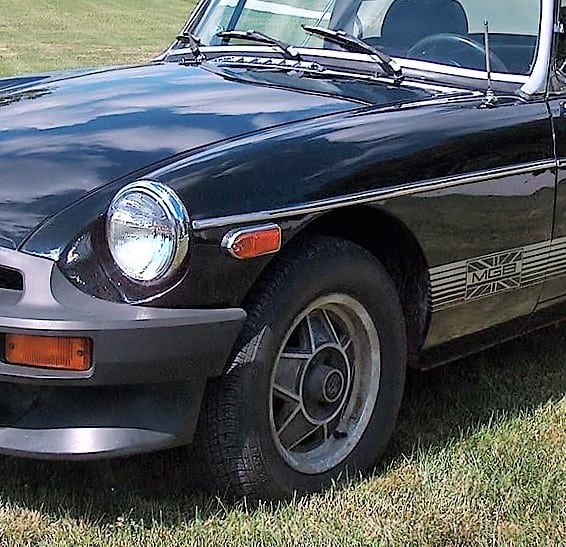 By the mid-1970s, the MGB was getting long in the tooth. The sports car had grown heavier due to DOT crash regulations, which included awkward rubber bumpers front and rear, and slower due to EPA emissions regulations. But the British automaker had no money for a redesign or to substantially upgrade any part of the car to bring the poor MGB’s performance even up to the level from when it was introduced.

As time went on, it got worse. Each year, MGB became slower and poorer handling. Amazingly, this did not hurt sales, and the company sold as many of the cars as it could build.

In 1979, MG’s owner British Leyland did a Limited Edition of the B. While its performance did not get any better, it did get a nice set of alloy wheels, a cool silver stripe, front spoiler, leather-covered three-spoke steering wheel, and a nice dash plaque.

The Pick of the Day is a 1979 MGB Limited Edition roadster that has been driven just 45,514 miles, according to the private seller, the third owner who bought the car in 1985 when it had only 19,000 miles. Both previous owners lived in the current owner’s same home town, according to the Lima, Ohio, seller.

The car has been well-maintained, garage-kept and never driven in winter, says the ad on ClassicCars.com. Still in original condition, the MGB looks fresh in the photos with the listing.

I remember first seeing these cars when new and actually test drove one in 1980 (before I had a driver’s license). While no performance demon, it was a well-built car and fun to drive.

There were 6,668 MGB Limited Edition models built during 1979 and 1980, which seems like quite a few cars for something calling itself a Limited Edition. But I have always had a soft spot for these because they are the last MG sports car models built, and represent an end of an era. The Limited Edition was nicely done and a fitting sendoff for the long-lived MGB.

These cars have enough of a following that a book entitled Limited Edition was published about the model. It is filled with information and talks about the whole process that these cars went through for production. The North American MGB Registry has a separate registry section just for the Limited Edition.

The MGB Limited Edition is unlikely to ever be worth as much as an early pull-handle MGB, but these are special cars and deserve to be thought of as such.

The asking price of only $6,000 or best offer is about average for the model, and it represents quite a bit of car for not much money. And if you want more performance, there are plenty of aftermarket companies offering upgrades for the sturdy 1,800 cc engines.