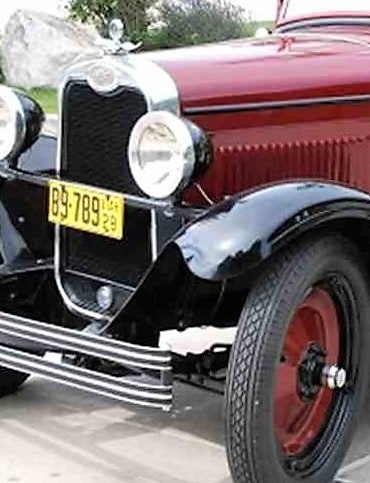 Chevrolet launched its 1928 AB National into direct combat with Ford’s new Model A, the long-awaited replacement for the ubiquitous Model T. Anticipating the hot competition, GM had the Chevy AA Capitol from the previous year restyled by its recently organized Art and Colour Studio, headed by the iconic Harley Earl.

The result was the Chevy AB National with a refreshed look, brakes on all four wheels, improved headlights and a four-inch longer wheelbase, to 107 inches. The base-model car retained the four-cylinder engine, although with marginally more power, and mechanical underpinnings of its popular predecessor.

The automaker was not taking any chances, though, offering a $50 discount on the National to better match the bargain-basement price of the Ford. That was a big inducement when the Chevy’s pricing was just $495-$715.

The new design and discount apparently worked, as Chevrolet managed to retain its crown as sales leader, at least for a while.

The Pick of the Day is an attractively restored 1928 Chevrolet AB National Roadster, which the private seller says is in “museum condition throughout.” It looks very clean and original in burgundy paint and black trim, with a handsomely tufted leather seat.

“Entered in only one show and won ‘Best of Show’,” the seller adds.

The photo gallery shows an immaculate veteran that’s apparently ready to drive. This would be a fun old car to own, enjoying the motoring experience of our grandparents and great-grandparents.

“Standard equipment included an inside rear-view mirror, rear light and brake light, parking lights and a gas gauge,” the seller says. “Bumpers, however, were still optional – but purchased by the original owner of this car.”

The Chevy is powered by a 171cid four-cylinder engine rated at 35 horsepower, attached to a three-speed transmission. The hood was elongated for 1928 to make room for the six-cylinder engine that was soon to come, another shot against the Model A. But the four banger should move this 2,000-pound roadster along OK, although freeway driving is out.

The asking price of $25,950 seems fairly inexpensive for this fine-looking piece of living history.