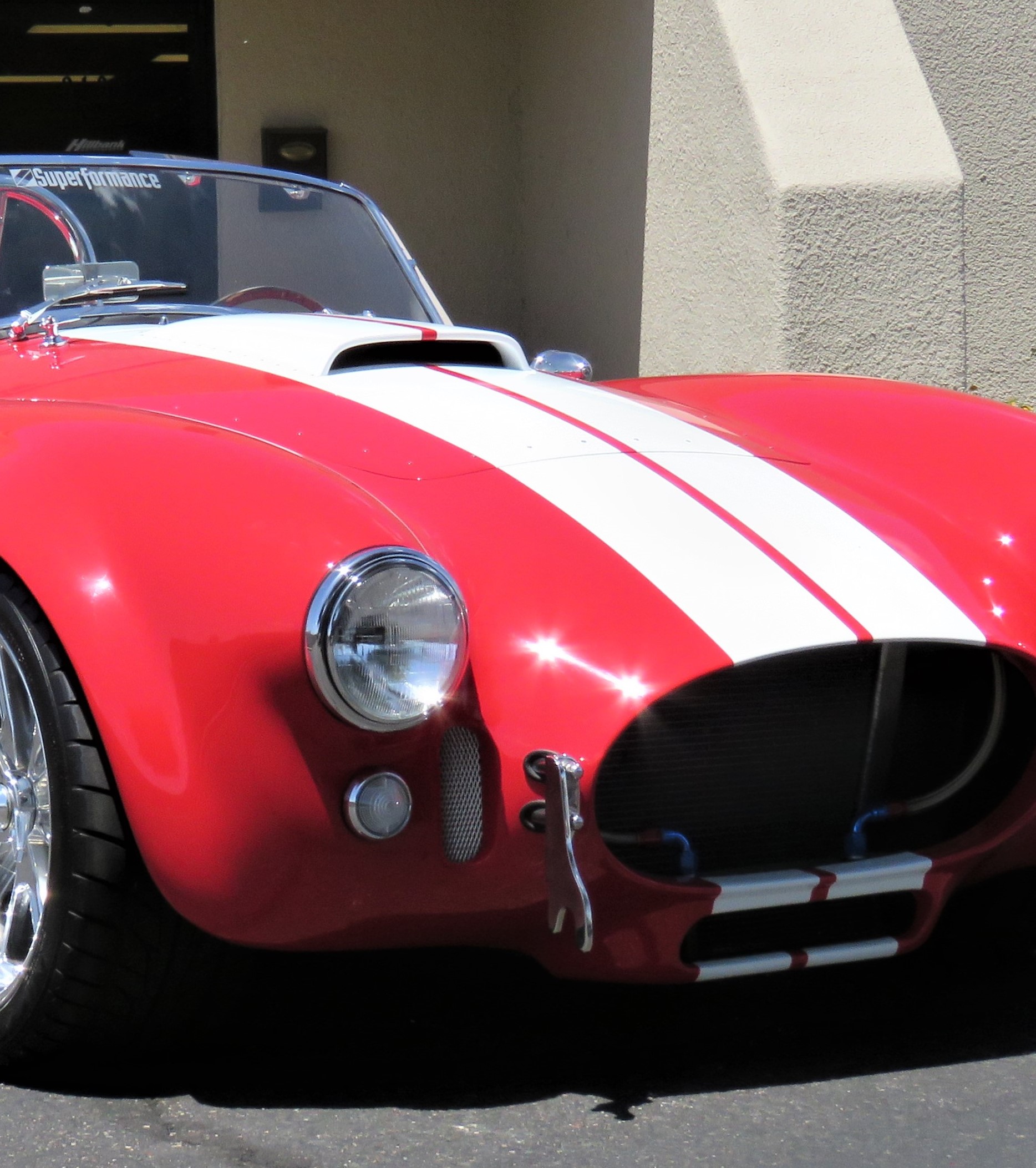 The little red roadster started with a thunderous blast, a full-throated roar from its fat side pipes that seemed to thicken the air. The big V8 settled into a lumpy high-performance idle that burbled like the bass section of a symphony orchestra.

Hunkered down on the pavement in a Tempe, Arizona, industrial park, the Superformance MKIII was like a brawny beast about to launch into battle. The MKIII is full of sound and fury, and it’s like buying a brand-new Shelby 427 Cobra, with all the glorious style and outrageous power that entails.

The Cobra doppelganger stood in front of the newest Superformance dealership, located in Tempe and celebrating its grand opening June 3. This will be the largest dedicated Superformance facility aside from the company headquarters in Irvine, California, according to the dealership’s general manager, Art Manni.

Licensed by Shelby American and constructed in South Africa, the MKIII is a superb replica of the Cobras that Carroll Shelby built from the British AC Ace to take on the world’s greatest sports racers, and to win. The modern-day Cobra retains its ’60s character with a fiberglass body nearly identical to the flare-fendered original – “aesthetically and dimensionally correct,” the company says in its literature – built to a high standard with modern components at the Hi-Tech Automotive factory in Port Elizabeth, South Africa.

“There are 500 artisans there that hand-build the cars,” said Manni, adding that the fiberglass bodies are hand-laid and polished, and expertly finished with PPG paint. “It’s what we would consider to be show-quality paint.”

Superformance is the distributor for the cars, with Hillbank Motor Corporation operating the chain of about 20 dealerships worldwide, Manni noted. “We’re probably the largest distributorship of Shelby replicas in the world.”

Last year, Superformance announced a “continuation” Ford GT40 MkI and MkII built from pressed steel and so close to the original 1960s Le Mans-winning race car that 85 percent of the parts are interchangeable.

The dealership building looked fairly non-descript during a recent visit, not yet wearing its Superformance regalia. But walking through the glass doors revealed a multi-colored array of Superformance and Shelby performance cars that looked like they had just arrived from the ’60s in a time machine.

Parked on the showroom floor were a half-dozen beautifully replicated Cobra roadsters, a Daytona coupe that seemed like it just got back from Le Mans and an aggressive-looking Corvette Grand Sports, all appearing wonderfully authentic, all built in homage to fabulous ’60s sports and racing machines. There were about 20 more reproduced Cobras in the attached 6,000-foot warehouse space.

Seeing all these ersatz Cobras might lead one to believe that the Superformance cars are plentiful and fairly common, Manni said, but that’s just not so. Only about 300 are produced per year for the worldwide market.

“These cars are rare and exotic, and you’re not likely to see one coming the other way,” he said during a tour of the facility. “But at the same time, we need to produce enough of them so that we have some inventory.”

In this impressive automotive toybox, all of these sports cars have one thing in common. None of them have engines or transmissions. That comes later, after the customer buys a car, which is otherwise fully equipped with brakes, electrical systems and every other component of a modern vehicle, including choices of optional equipment.

The new owner then arranges to have the drivetrain installed, a process most-often facilitated by the Superformance dealership. For the Cobras, Daytonas and Corvette Grand Sport, the customer’s choice will be which high-performance V8 and transmission will go into the new sports car.

The reason for this setup is because of federal regulations, although that has recently changed. Up to now, small-batch auto manufacturers could get around safety and environmental regulations that regulate the major automakers, domestic and foreign, only by selling their products as “kit cars” without engines.

In December 2015, Congress passed a law that exempts manufacturers who build a maximum of 325 vehicles that resemble production vehicles from at least 25 years ago. The replica vehicles do not have to meet Monroney labeling requirements, pass emissions requirements or be subjected to crash testing.

For such companies as Superformance, the law means that the company can sell complete, running cars rather than having the drivetrain retrofitted after the sale. As this point, the company is dealing with red tape requirements to allow it to put the road-ready cars in their dealerships. But for now, the current system is no big deal, Manni said, and it also allows buyers to choose which engines and transmissions they want in their sports cars.

The most-popular engine for the 427 Cobra replicas is the Ford 351 cid Windsor V8, which is bored and stroked to 427 and pumps out 525 horsepower, he said. That’s formidable performance for a roadster that weighs just 2,450 pounds. There is also the possibility of using a modern Ford twin-overhead-cam Coyote V8, as well as some other choices. Not common, but some drivers choose automatic transmissions rather than the more-authentic manuals, now with six speeds instead of four.

Another popular choice is the lighter Ford small-block 302, also bored and stroked and tuned to produce 450 horsepower. This is the choice most owners would make for a different Superformance product, the MKII Slabside that replicates the original 289 Cobra, with its slimmer form that is more directly related to the AC Ace from which Carroll Shelby created the Cobra.

Whatever the choice, the owner should have a thrilling driving experience in a fast and tractable roadster that provides vintage Cobra performance without the maintenance challenges of owning a more-than 50-year-old car.

I took that red Cobra Mark III out for a brisk drive and it was everything that the company said it would be. The roaring power from the 427 stroker V8 feels limitless, although we were on public streets and couldn’t really wring it out as you might on a track. Still, goose the throttle and feel your body pushed back in its seat as the roadster springs to life with a crackle from its side pipes.

The ride is surprisingly supple for a such a tight little car, with no noticeable harshness and minimal buffeting. The handling is superb, as expected, feeling balanced and aggressive as the car dives into corners. Buyers have a wide range of tire choices; this car was outfitted with some sticky race rubber. The non-power steering felt a bit heavy at low speeds, but chalk that up to the wide tires with their massive adhesion.

The interior feels roomier than the original Cobra, thanks to a slightly dished out floor section that lowers the seat. I’m extra tall, and while headroom was infinite with the top down, legroom was fairly tight. That, and the pedals are offset to the left to accommodate the engine tunnel protrusion, which took some getting used to, especially when initially locating the brake pedal. The Wilwood brake system provides stellar stopping power, however.

There are some other deviations from the original 427 Cobra in such things as the frame construction – boxed square framework for the Superformance rather than the huge 4-inch round main tubes of the Shelby Cobra. The structural rigidity is very high for the MKIII, Manni noted.

With one of the MKIIIs up on a lift, Manni pointed out the precise craftsmanship that goes into the cars, as well as the top-notch components.

Back in the showroom was an actual new Shelby Cobra, this one a continuation 427 model direct from Shelby American, complete with a serial number starting with the CSX of the originals. These Shelbys are sold alongside the Superformance replicas; the Hillbank stores also serve as Shelby American dealerships. Like the Superformance cars, the Shelby’s engine was absent.

The Tempe dealership also displayed another product, a Caterham 7 from England, a lithe, lightweight and minimalistic sports car modeled after the original Lotus 7. Like the Cobra and Corvette Grand Sport replicas, the Caterham comes as a roller in which the buyer has an engine installed, most often a Ford performance inline-4.

The Superformance Cobras do not come cheap, although not bad considering the style, performance and build quality. As well as considering that original 427 Cobras hit over a million dollars these days.

The MKIII that replicates the 427 Cobra is priced at $53,000 for the base roller, plus optional extras such as special wheel-and-tire combinations that will boost the bottom line. Add sourcing of the engine, transmission and the cost of installation, which includes setting the car’s height and stance once the drivetrain is installed, and the finished car can be had for a little as $80,000.  There are some special-edition models that cost more.

The Daytona coupe version, which Manni describes as a sophisticated highway cruiser as well as a performance car, starts at $120,000 for the roller and finishes up at about $160,000 complete. Since there were just six Cobra Daytonas in the ’60s built to compete in endurance racing, and since one of them would command values up to $5 million, this seems downright reasonable. And you are guaranteed loads of head-turning attention.

Manni added that resale values remain high for Superformance sports cars because of the company’s reputation for a quality product that replicates the look and feel of the originals. Insurance companies appreciate the build quality as well, he said, and adjust their rates accordingly, while they might charge more for lesser-known replicas of questionable quality from other manufacturers.

Part of the joy of being in the Superformance business, Manni says, is dealing with Shelby American and enjoying the performance of the cars; he owns a couple of them. There’s a strong feeling of history and heritage that goes into this, he added, which he relishes.

“We get to relive a lot of this stuff,” he said.

For more information about Superformance, visit the company website.