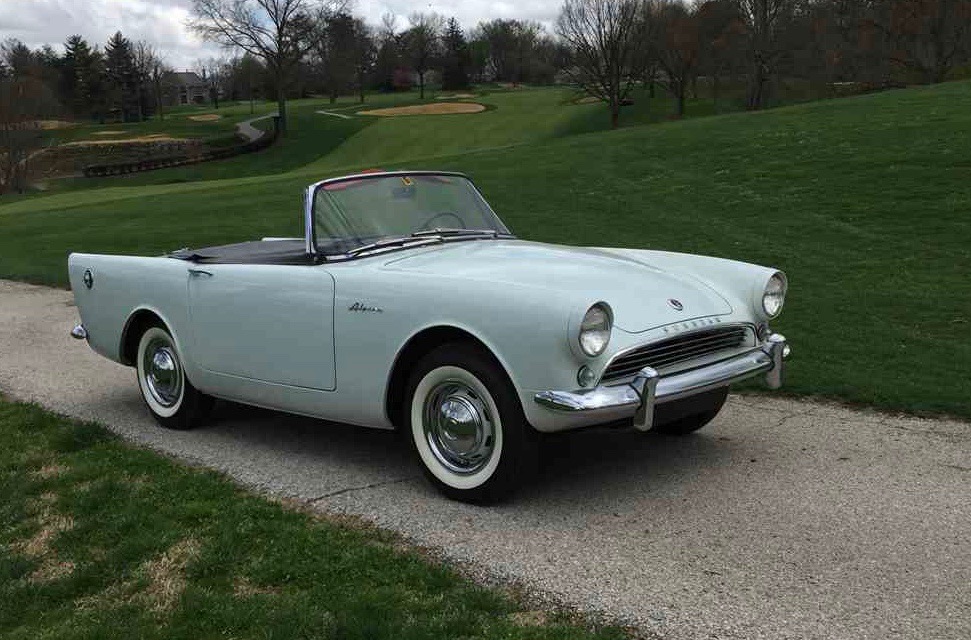 A few days ago, Bob Golfen’s Pick of the Day was a 1966 Sunbeam Tiger. The choice for today is a 1962 Sunbeam Alpine.

Basically, the Tiger is the souped-up version of the Sunbeam and is empowered by a small-block Ford engine that none other than Carroll Shelby hisownself figured out how to shoehorn under the “bonnet” of a British sports car designed around a four-cylinder powerplant.

That British sports car was the Sunbeam Alpine.

The Sunbeamland Cycle Co. was founded in 1887, built its first motor car in 1899 and not only fielded entries in Grand Prix racing in the early days of motorsport — Henry Seagrave leading a 1-2-3 sweep in the French GP in 1923 — but also had a car in the starting field for the Indianapolis 500 in 1921 — Ora Haibe qualifying 13th fastest but finishing fifth.

The business had its ups and downs — in 1920 it merged with Darracq and Talbot, in 1935 it was acquired by Rootes Group, which in the late 1970s became part first of Chrysler and then of Peugeot until production vehicles badged as Sunbeam ended in 1982.

But our focus is on the Alpine, which originally was a two-seat sports car introduced in 1953 and remaining in production through 1955. But Sunbeam launched a new Alpine in 1960, which stuck around until 1968.

The Pick of the Day is one of those second-generation Series II cars, a 1962 Sunbeam Alpine. Its private seller notes in the advertisement on ClassicCars.com that the car is a 54,000-mile unrestored “survivor” still wearing the Fort Riley military base parking pass applied by its original owner in 1963.

The seller notes that the car is an “extremely solid fun reliable driver. No rattles or shakes.”

However, it is a “prime candidate for cosmetic restoration.” The original Moonstone paint is getting thin in places, the original aluminum hardtop needs some repair, and there are some tears in the original convertible top. The car comes with a tonneau cover.

Tires and exhaust are new. The car has its original engine but it was converted to a Weber carburetor setup. However, the earlier dual Solex carbs and manifold come with the car, as do “lots of extra parts.”

For 1962, that original factory-installed engine would be a 1,500 cc inline four cylinder pumping out 80 horsepower and 94 pounds-feet of torque through a four-speed manual gearbox, good enough to achieve a 100 mph top speed.