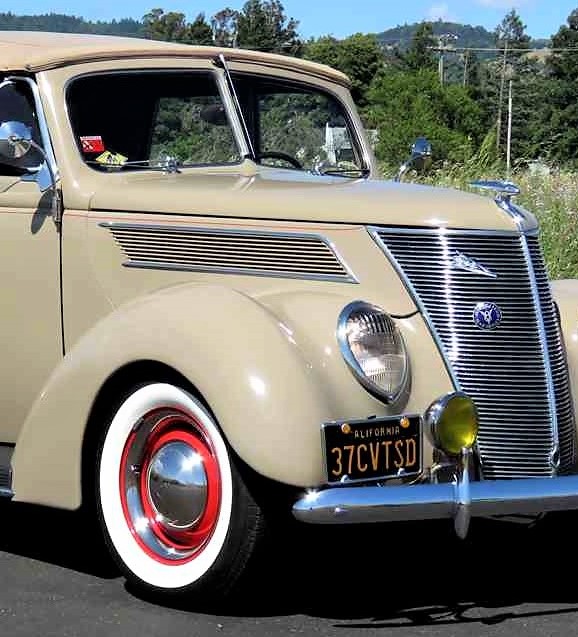 The four-door luxury convertible is pretty much an extinct configuration, gone by way of 1960s Lincoln Continentals, unless you count a couple of recent concept cars.

But there was a time when an open-air car with rear doors was the height of stylish transportation, such as the Pick of the Day, a 1937 Ford Model 78 Deluxe Convertible Sedan. While the Ford looks original, other than its slightly lowered stance and modern wheel treatment, the convertible packs a modern drivetrain for performance and reliability. The dual exhaust is also something of a giveaway.

This classic resto-mod has a crate GM 350 cid V8 under its hood backed by an automatic transmission, according to the seller, a Sonoma, California, dealer advertising the Ford on ClassicCars.com. That might sound heretical to vintage-Ford fanatics, who would prefer the original flathead V8, but there’s little doubt that the car is equipped for cross-country travel on today’s highways.

Other upgrades include disc brakes in front and newer classic-whitewall tires; the red steel wheels with chrome trim provide a nice accent to the tan body and top. A new fabric roof was recently installed at a cost of $6,000, the seller says.

“This California Ford was restored many years ago and has been beautifully preserved and cared for since,” the ad says. “Its current owner purchased locally over a decade ago and has made some nice improvements making it excellent for long, comfortable trips while keeping the appearance of originality.”

There also seems to be an old-school CB radio and lofty antennae on board.

The seller provides an extensive gallery of photos that show an exceptionally clean 80-year-old car, with bodywork and interior redone in original style. In resto-mod fashion, this Ford would provide the best of both worlds: an original-looking restoration of a desirable old Ford with the capabilities of a modern car.

The asking price of $42,800 seems fair enough, and you can let those Ford purists fume as you pass them by on the open road.