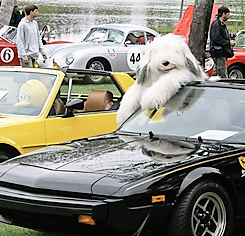 The Greenwich Concours d’Elegance is actually two separate concours events, one for American brands dating to the dawn of motoring and the other for European sports and luxury cars. Each event has its own class, people’s choice and best of show award winners.

A total of 250 vintage cars, classics and modern supercars will be on hand, with 125 cars and motorcycles on the field for each concours day at Roger Sherman Baldwin Park in Greenwich, Connecticut.

This year, the Concours Americana takes place Saturday, June 3, featuring hot rods and customs in a first-time Hot Rod Class, plus a display of children’s toy vehicles. The foreign cars take the field for the Concours International on Sunday, June 4, featuring a Bugatti class, race cars from the Lime Rock Historic Festival, and more children’s cars.

For information about both concourses, visit the event website.

The Greenwich show weekend also will include the Cannonball Run Reunion of the actual outlaw cars that took part in the legendary coast-to-coast race during the 1970s, and which was depicted in the 1981 film, The Cannonball Run. The cars include Brock Yate’s Challenger, Bill Warner’s Porsche 911, Travis Bell’s Transcon Medi-Vac re-creation, and Alex Roy’s BMW M5,

The Reunion will feature a gathering Friday, June 2, at the Greenwich Library in conjunction with the Greenwich International Film Festival, which takes place at the same time as the concours events. A number of the original drivers will speak about their exploits during the under-the-radar competition. Tickets for the Friday event are $125 and include food and drink. Proceeds benefit the New England Auto Museum. For information, visit the Greenwich Film Festival website.

The Huntington Beach Concours d’Elegance happens Sunday, June 4, at the California city’s landscaped Central Park, with about 120 classes for cars and motorcycles. Featured this year are special classes for 60 years of Corvette and 25 years of Lexus, plus motorcycle classes honoring Yamaha and Can-Am Spyder.

The weekend begins with a Rod and Custom Show on Saturday, June 3, with a wide range of hot rods, rat rods and customs, along with a salute to the “Donut Derelicts” weekly car show in Huntington Beach.

The inaugural City Concours in London, England, tales place June 8 and 9 at the Honourable Artillery Company headquarters with about 100 historic and modern cars, featuring “supercar icons” from the past 60 years, including the Mercedes 300SL “Gullwing,” Jaguar XJ220, Ferrari LaFerrari and McLaren P1.

Also featured is a Modern Bespoke class of vehicles hand-built in the style of such classics as early Porsche 911, Jaguar E-Type and Ferrari Barchetta.