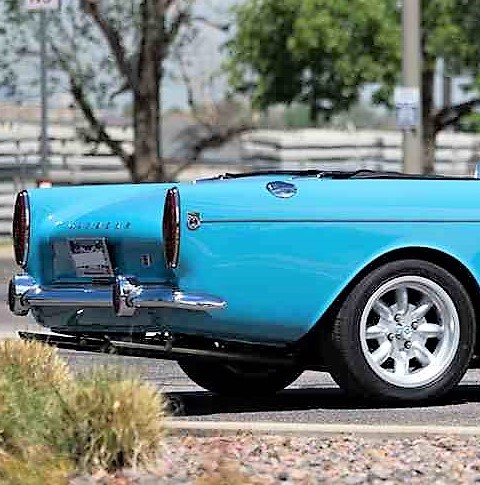 During the 1960s, British automaker Sunbeam was known for its cool but modestly powered Alpine sports cars that competed with MGBs and Triumph TR4s. But the Rootes company that owned Sunbeam had higher aspirations for its little roadster, so it called upon the leading expert in shoehorning American V8s into little British sports cars: Carroll Shelby.

Having just shown tremendous success with the Shelby Cobra, which was essentially an AC Ace with a small-block Ford engine under its hood, Shelby and his crew managed to coax a 260cid V8 into the engine compartment of the diminutive Alpine. The resulting Sunbeam Tiger was a roaring success, although the production cars ended up being produced by Jensen.

The Pick of the Day is a 1966 Sunbeam Tiger that the seller says is an original V8 car that has been professionally restored; Tigers are easily faked by cramming 289s into Alpines and calling them Tigers, but this one is said to be true and actually blue.

The Tiger is in spectacular condition, according to the seller, an Englewood, Colorado, dealer advertising the Sunbeam on ClassicCars.com. “The restoration was a lengthy, detailed project spanning several years and involved every aspect of the car,” according to the listing.

A professionally built replacement V8 has been installed, which the seller says is “a balanced 289 with 302 crank, rare Tiger low-rise 4-bbl manifold and is accompanied with a full dyno report and specification sheet.” There are demerits for the Tiger not having its original 260, although this V8 makes 86 more horsepower than the factory engine, the seller says.

The rest of the restoration is also top-notch, according to the ad.

“A total chassis restoration was completed with rebuilt brakes, suspension and all new rubber, wiring, plumbing and exhaust, plus Koni shocks,” the ad says.  “This was not an amateur effort, as all work was professionally done by recognized experts.  The entire interior was trimmed in correct materials and patterns, including a new Robbins top and is truly show-worthy.

“All instruments were rebuilt and dash (wood) veneer replaced. The body was finished in the original Mediterranean Blue, done to a show-quality level, including all new windshield and door glass.

“Please look very carefully at the picture portfolio – this is an exceptional restoration topped off by period Minilite wheels and Becker Europa radio.  It looks, drives and feels just like it did back in 1966 and is easily a Hagerty #1-level car with only 73K original miles.”

While Sunbeam Tigers will never have the raw panache of a Shelby Cobra, they are hot performance roadsters done in the age-old  formula of big Detroit engine in a little lightweight car. The Tiger did gain some measure of Hollywood fame during the ’60s by being driven by Don Adams in the TV spy spoof Get Smart.

But no longer can the Tiger be considered “the poor man’s Cobra” because they command strong prices these days, though still a faction of Shelby values. This one is offered at $119,500 for what the seller says is a perfect example.

That still is less than what Hagerty says a No. 1 ’66 Tiger is worth, which the classic car insurance and valuation company’s current price guide says is $135,000. A Tiger in N0. 2 shape is rated at $96,500. Considering the replacement engine, the asking price is probably right on the money.