Winning on the track, and in business 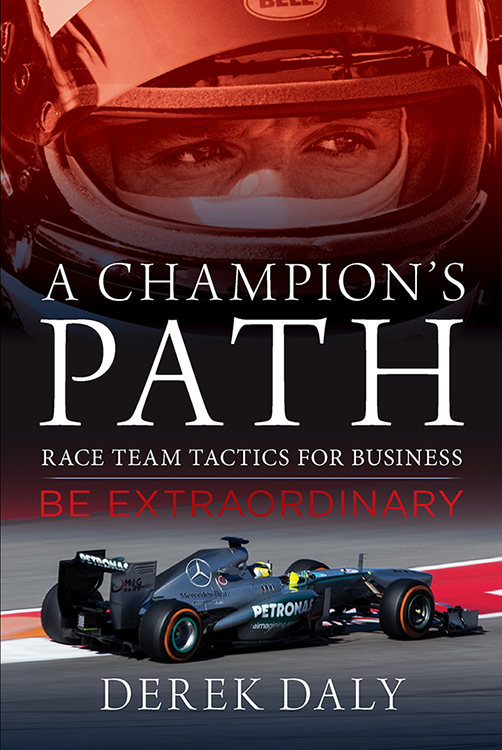 Automakers love to talk about technology transfer from the race track to the roadway. And with good reason. What better way to validate the latest in hard- or software than by putting it to the test in the hot, high-pressure and ultra-competitive environment of the race to the checkered flag?

But technology isn’t the only thing that can transfer from raceway to roadway.

“What if you and your team could progress beyond great?” author Derek Daly asks in the Introduction to his latest book, A Champion’s Path: Race Team Tactics for Business.

“Motor racing at the highest levels provides real examples of such teams of people,” he continues, noting that in the face of increased regulation, restrictions on development, and other pressures, “The window to be competitive became narrower than ever.”

Yet some still succeeded. They key, says Daly, is to go no just beyond good to great but to “become extraordinary.”

And, he adds, there are things learned in motorsports than can be applied to winning in other aspects of life.

Daly knows whereof he speaks, and writes. He won Irish, British and American racing championship, made his debut in Formula One in 1978 and in 1983 made the first of his six starts in the Indianapolis 500. After leaving the cockpit, he became a television commentator. His son, Conor, has followed him, making his Indy 500 debut in 2012.

Of late, Derek Daly has become known as a keynote speaker, addressing companies and corporate leaders. This is his second book, following Race to Win.

If there is a keynote to A Champion’s Path, it is trust, or what Daly terms “tandem trust.”

What is tandem trust? According to Daly, it is “The power of sharing is when your knowledge and information is shared with the people around you to help them, and how it then actually helps you too.”

Other statements that should stick with the reader include the importance of celebrating victory, of debriefing after that celebration, or preparation, or creativity — even the serious consideration of “wild” ideas — and of out-thinking the competition as a powerful propellant toward out-racing that competition.