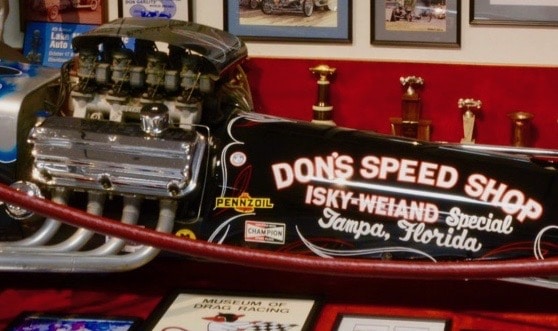 Don Garlits is the undisputed king of drag racing. Now 85, he has won 17 championships, won almost 150 races, and built, tuned and driven about 60 different race cars since he started racing in 1950.

He is known around the world as “Big Daddy,” and about 40 of his race cars have been called “Swamp Rat,” because Garlits was born and raised in Florida.

More than 30 years ago,  Garlits decided to use a bunch of his old race cars, and some bought, borrowed and loaned cars, to start a museum dedicated to the history of the uniquely American motorsport of drag racing. He and his late wife, Pat, called everyone they knew, and they knew everyone, to get the word out.

Since then, the museum has expanded three times since on the large property in Ocala, Florida, adjacent to I-75, and now includes a separate building dedicated to antique vehicles, antiques, ephemera, and equipment. If you are any kind of a gearhead, this museum is a must-see.

Although there are Swamp Rat dragsters all over the place, from Swamp Rat I to Swamp Rat XXXIV, and a collection of early Garlits street rods and drag cars, most of the space is dedicated to dragsters, roadsters, streamliners, and funny cars built by others, cars that show where drag racing came from and who the pioneers were and are. There is very little wall space left uncovered, and there are event posters, trophies, uniforms and helmets all over the place.

If you like to look at the details of racing engines, there is one side room dedicated to engines-under-glass that will make you salivate and ponder. In that same room, an entire wall of carburetors and intake manifolds demonstrates the myriad ways you can feed gasoline into an engine.

A wander through the building will show you how drag racers experimented with all kinds of engines, multiple engines, engine placement, supercharging, aerodynamics, wings, bodies and downforce through the decades. You will see everything from early homebuilts to professionally built cars, and everything in between.

In the other building, there are nearly a hundred vintage production cars, thousands of pieces of ephemera and memorabilia, and some unique equipment.

Garlits loves old Fords and Ford flathead V8 engines, so there are dozens of them in there, Ts, As, Deuces and restored beauties from the Thirties and Forties, but there are also some rare ones here, like the Moon and the Metz roadster from the brass era.

Even if you’ve never been to a drag race in your life, you will want to see this great museum for its depth and breadth. It even smells good.

Jim McCraw
Jim McCraw has been writing about cars, motorcycles, design, technology, car people and racing for 50 years, in such publications as Hot Rod Deluxe, Super Chevy, Muscle Mustangs, Road & Track, Car and Driver, Popular Mechanics, Popular Science, Penthouse, Winding Road, The Mercedes-Benz Star, AutoWeek, The New York Times, and a number of European publications. He was executive editor of Motor Trend, editor of Hot Rod and Super Stock. He co-holds the record for the drive from Prudhoe Bay, Alaska, to Key West, Florida, 96:22, and has run in major events such as the Mille Miglia Storica in Italy, Goodwood, the California Mille, the Colorado Grand, the New England 1000, Forza Mille, and four One Lap Of America competitions He owns a pristine Mercedes-Benz E-Class sedan.