Seeing Red: The Petersen’s tribute to 70 years of Ferrari 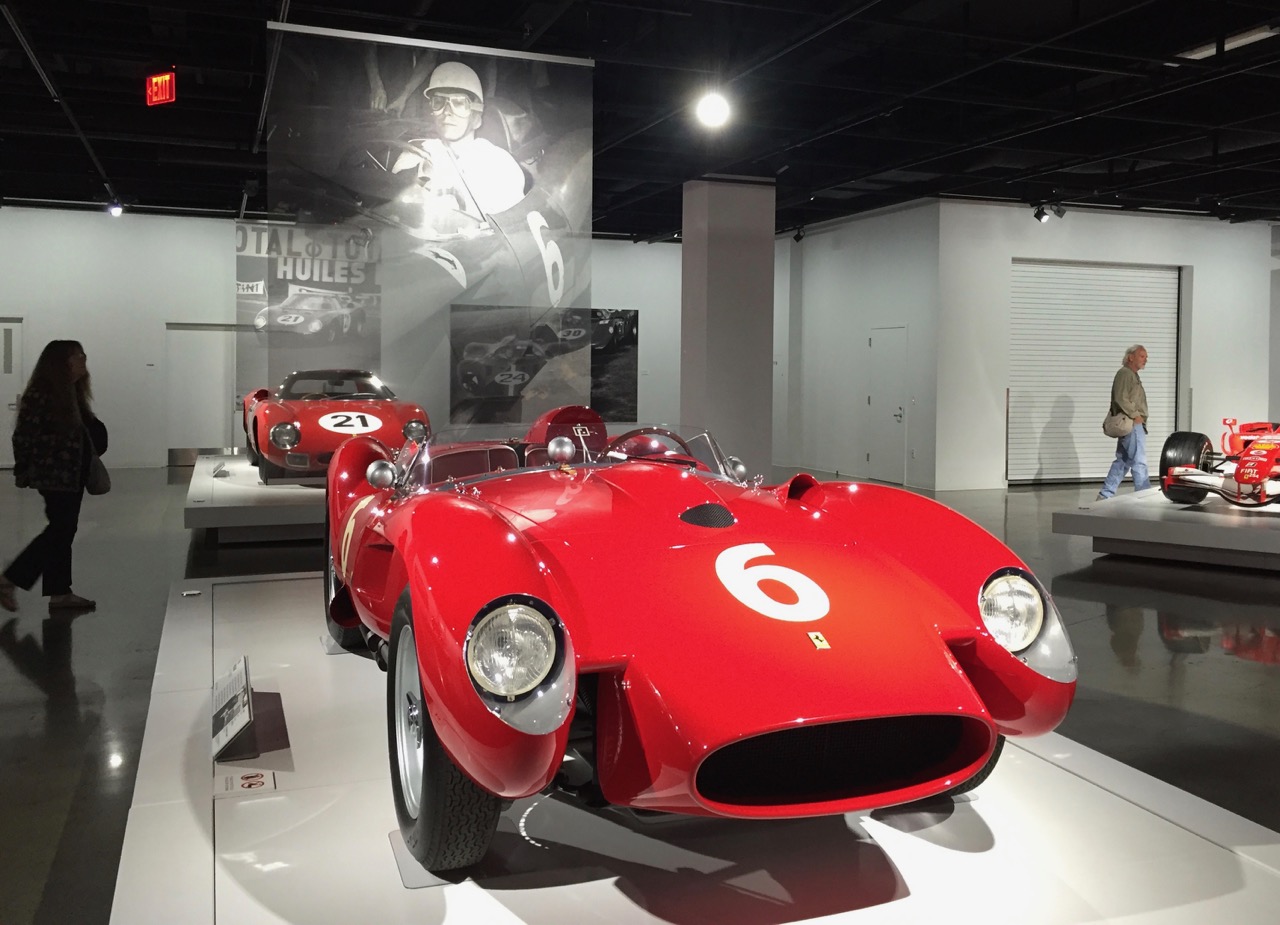 Red, because Ferrari continues to honor the 1906 Federation International de l’Automobile decision to establish national racing colors to facilitate a spectator recognizing racers from his country — Italian participating cars would be red.

While there have been many manufacturers who spent vast amounts of money modifying production cars to improve racetrack performance, Ferrari in its early days made very minor modifications to make its racing sports cars street worthy.

Recently opening at the Petersen Automotive Museum in Los Angeles is an exhibition celebrating 70 years of that philosophy and, in fact, nearly a century of Enzo Ferrari’s dedication to that idea.

On 11 May 1947, the first two Gioacchino Colombo-designed 1.5-liter sohc V12 Ferraris appeared in competition at a sports car race in Piacenza, Italy. They shared this body design. Nino Farina crashed one and Franco Cortese was leading when the fuel pump failed in the other. A third Ferrari was constructed with a narrow body and cycle fenders for the next event. With it, Cortese won in Ferrari’s second race appearance ,at the Terme di Caracalla circuit in Rome, and the new marque began to dominate the Italian sporting press — and soon the same around the world.

With its Colombo V12 stretched to 2 liters and Luigi Chinetti, who had won Le Mans twice in Scuderia Ferrari-prepared Alfa Romeos, at the wheel, this Corrozzeria Touring roadster brought Chinetti his third Sarthe win and Ferrari its first. On 10 August, he used this same car to win the Spa 24 Hours in Belgium. Based on that experience, the veteran champion suggested Ferrari should make 10 more for him to sell in America — launching the marque as a “volume” manufacturer of sports cars. 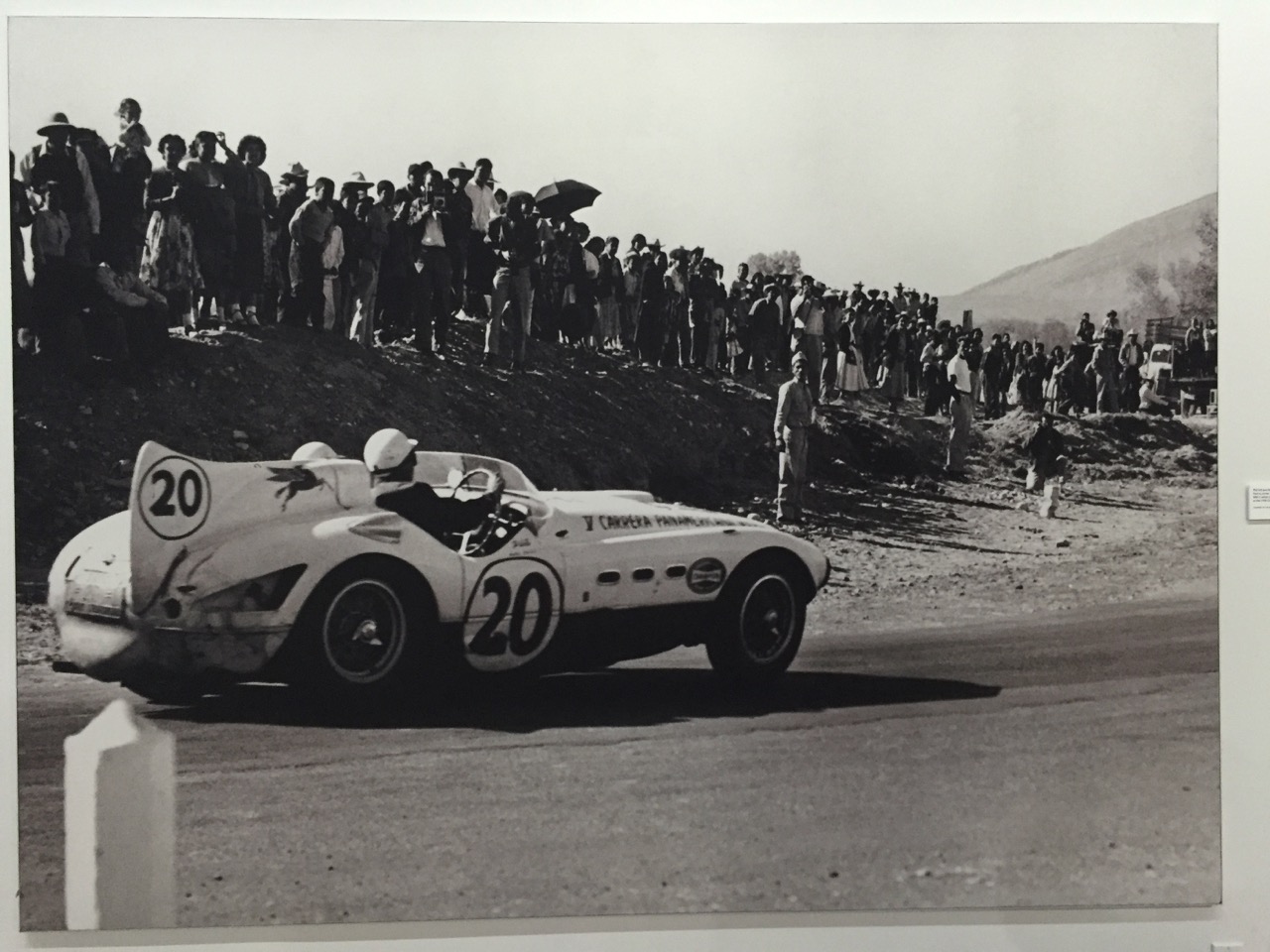 With a 4.5-liter V12, Phil Hill with his friend Richie Ginther finished second in La Carrera Panamericana Mexico close behind Ferrari factory driver Umberto Magioli and put himself on Enzo Ferrari’s radar for a future spot on the factory team.

Shown here in its John Edgar team colors, and in a black and white photo being driven by Jack McAfee, this is a 3.4-liter dohc four-cylinder monster made with lightweight and torque for American short-track races.

In 1955, Gianni Lancia lost his best friend, Alberto Ascari , in the innovative D50 Formula One car the young Lancia hoped would reinvigorate his company. Heartbroken, he gave his entire F1 team and equipment to Enzo Ferrari to do with as he chose. Scuderia Ferrari spent two years re-engineering and developing the Lancia into the Ferrari 801 — and giving Juan Manuel Fangio his fourth world driving championship. The car is seen being unloaded at Monaco with a set of motorcycle-like, reverse-cone megaphone pipes created especially for the very challenging circuit. 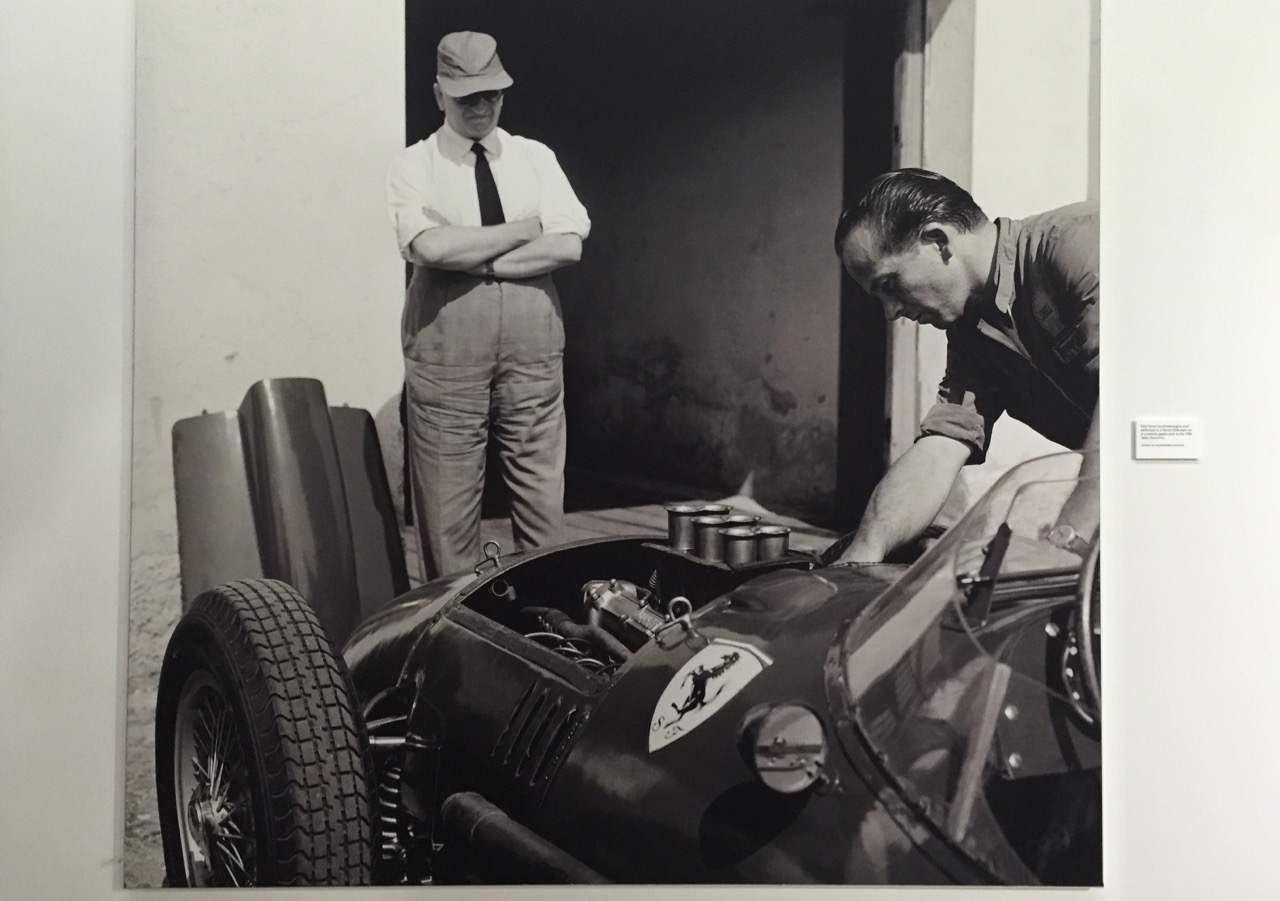 Enzo Ferrari did not attend races, but he was often seen at practice or testing periods at the Monza track. Here he oversees tuning on the new dohc V6 engine named for his late son, Dino.

The “customer” car used the fully developed Colombo sohc V12 in the chassis from the 4-cylinder 625 LM with its front-mounted gearbox and solid rear axle. It has been known since its introduction as the “Pontoon Fender Testa Rossa” for its cutaway front fenders; designed to put ambient air directly onto the exposed brake drums and let it exit unobstructed. This is a brilliant amateur driver’s race winner. It was perfectly balanced and quite free of dynamic surprises. The “factory” Testa Rosa had smooth fenders and a transaxle in the rear, among countless finely developed and constantly changing modifications as seen in the black and white photo from the 1959 Targa Florio. 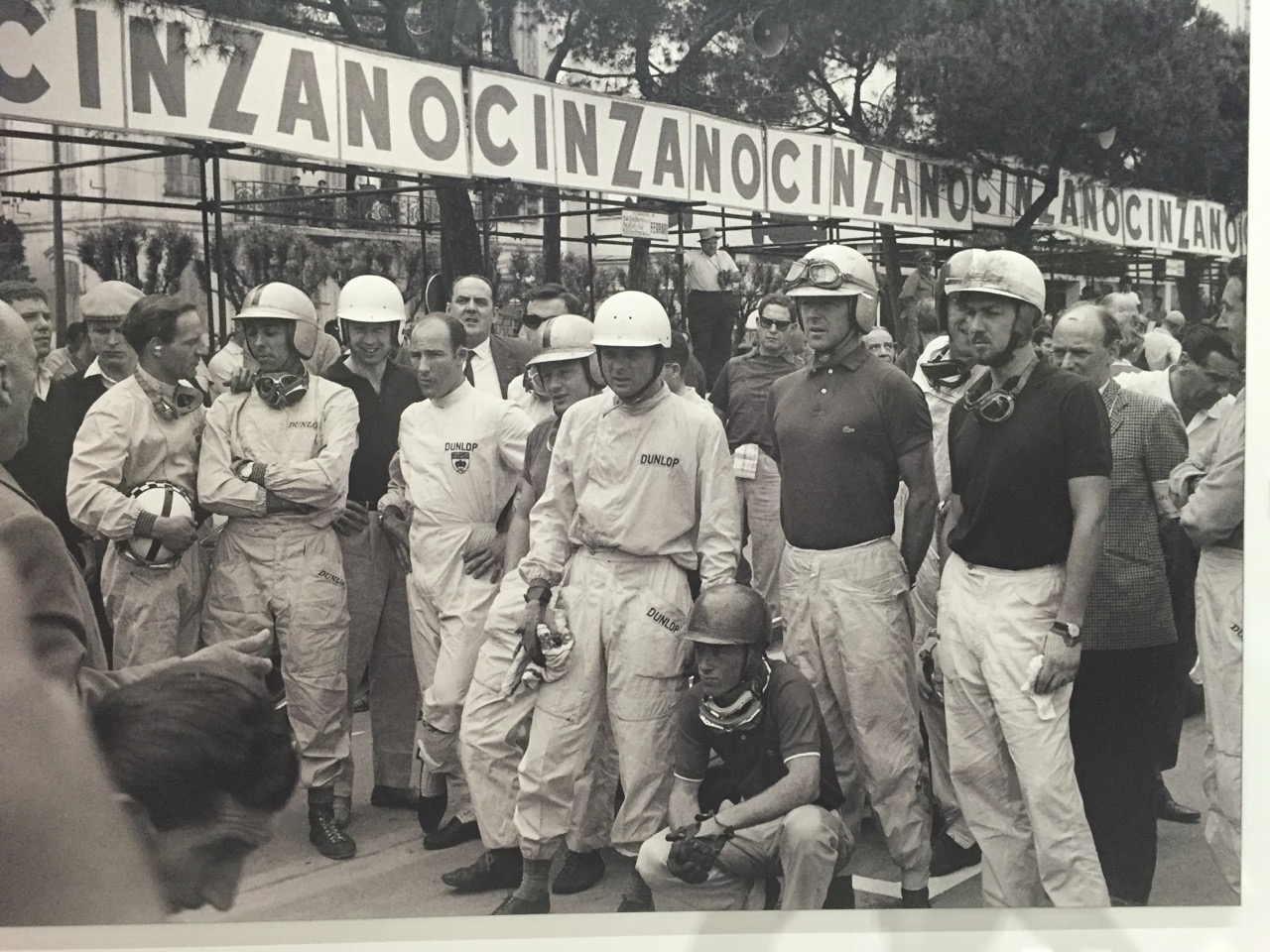 The California Spyder (originally on the long wheelbase chassis) was proposed to Luigi Chinetti by West Coast distributor John von Neumann, who believed there was a ready market for a chic, expensive sports car with racing pretentions. The short wheelbase version of the Spyder was meant to follow its predecessor as a dual-purpose sports car, but by 1961 chic outweighed competitive in the market place. 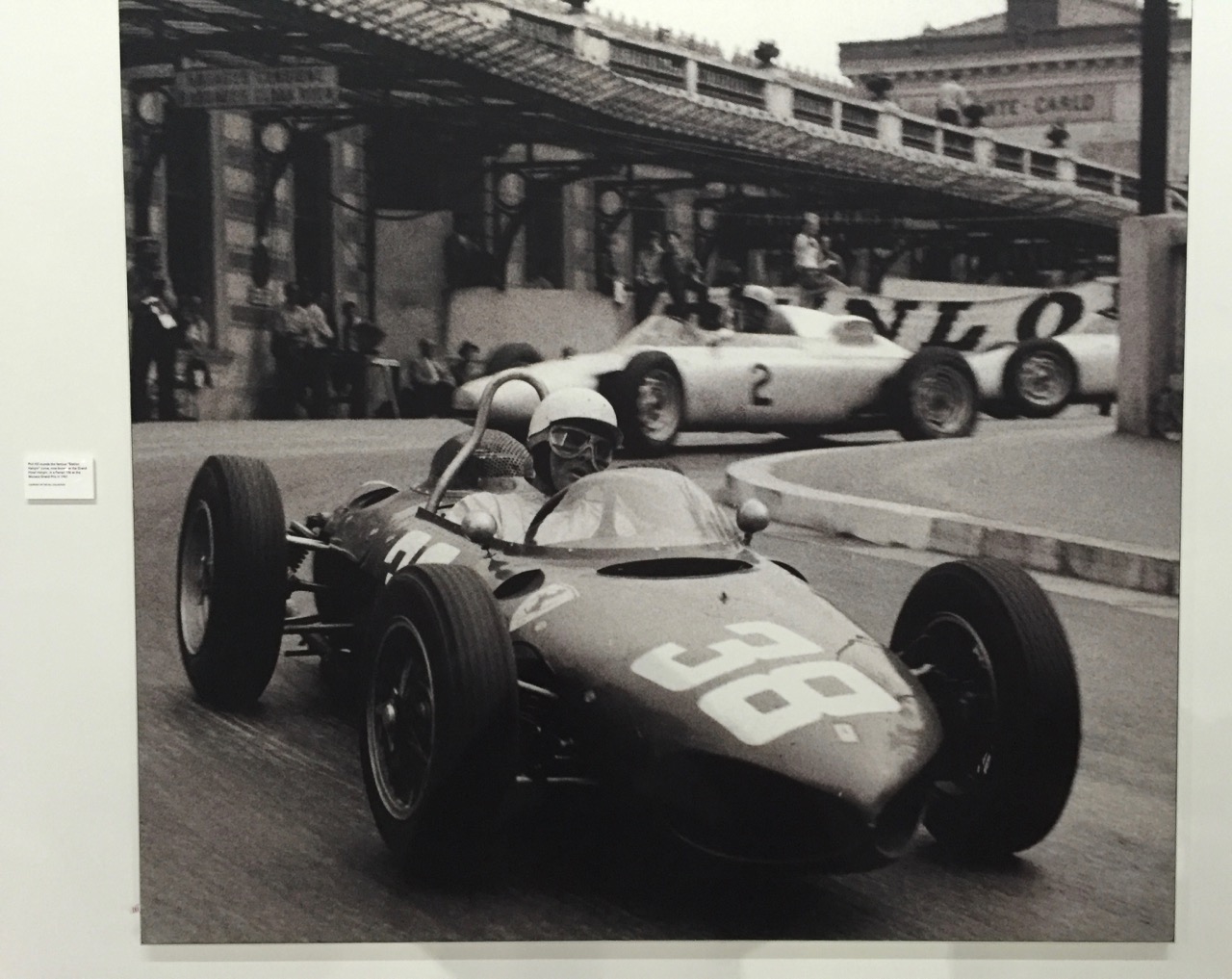 Phil Hill rounds “The Station Hairpin” in his run to third place in the 156 F1 car (with which he won the Word Driving Championship this year), behind his pal Richie Ginther, who drove the race of his life in pursuit of Stirling Moss who won in arguably one of the greatest races of his career.

Now one of the most valuable icons of motorsport. The car on display finished second overall in the 1963 Le Mans 24-Hours behind a 250P mid-engine sports racing car and was followed to the checker by another 250P in a line of Ferraris reaching back to sixth place.

Masten Gregory and Jochen Rindt made no mistakes and the “little” 3.3-liter Ferrari suffered no embarrassing failures while the mighty American V8 armada slipped back into the distance. Luigi Chinetti’s North American Racing Team just did nothing wrong until the checkered flag waved. As shown, the Le Mans winner has never been repainted and every glorious paint chip has been celebrated since that day. At a particular angle (far right image) one can see both the 1949 and the 1965 winners in your camera lens.

New rules forbade cooling air intakes behind the cockpit, so the latest 312 T (transverse gearbox) ducted the air from either side of the nose to radiators just behind the front suspension elements. Fresh air was ducted from either side of the cockpit back to the intakes of the 3-liter dohc V12 in the back. This car won both the Belgian and Monaco races assisting in Ferrari winning three consecutive F1 Constructor’s Championships.

The Pininfarina 308 GTB body was stretched and its drivetrain turned to a longitudinal mid-engine layout. It was expected to be homologated for the new FIA Group B category, but the category was cancelled before the 288 GTO ever made its official competition debut. The “288” refers to its 2.8 liter V8 engine with twin turbochargers, intercoolers, and fuel injectiom. According to the FIA Group B rules, a turbocharged engine’s capacity was multiplied by 1.4. This gave the GTO a theoretical engine capacity of 3997cc, just under the category limit of 4.0 liters. The beautiful little coupe was an immediate success as a street super car and has since become extremely collectable.

Michael Schumacher drove this 2.4-liter V8 car during his last season of F1. It is worth spending a half hour investigating the wonder-filled aerodynamic devices (many so tiny as to give pause for what they do) covering the body structure of this early new-age aero experiment.

The marque’s historic entry into production hybrid technology. Its 6.3-liter V12 is supplemented by a 161-horsepower electric motor for instant torque delivery. The 500th LaFerrari constructed was sold at auction for $7,000,000 in 2016, a record price for a new car.

The acclaimed ArtCenter College of Design in Pasadena has produced many of the world’s leading automotive designers. The remodeling of the Petersen museum included the establishment of an ArtCenter two classrooms within the museum. As part of the Seeing Red exhibition, students created models for their visions for red cars for the future.

Photos by Larry Crane; vintage black and white courtesy of the Petersen