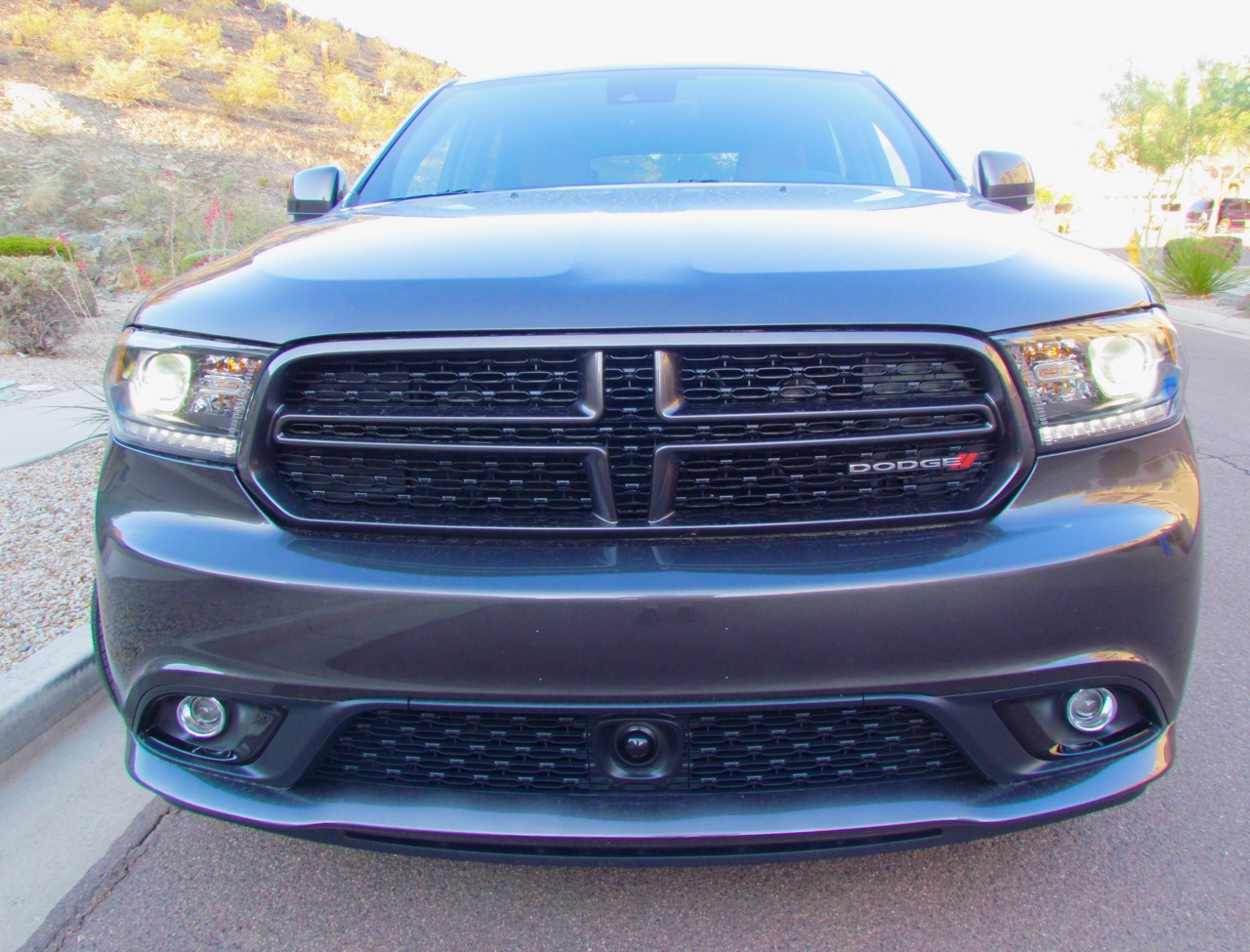 Not only do the wheels match the body color, but they have an open 10-spoke design that showcases the nearly 14-inch diameter vented disc brakes up front, with only slightly smaller 13s in the rear.

Personally, I’d prefer a more colorful brake caliper, maybe a yellow or even a red. Probably red since it would match the color of the three-row leather-covered seats that are hidden until someone opens a door and gasps at the impact of such a sight.

Man, if this thing goes as well as it looks, Dodge should have a real hit on its hands.

And after all, it does have a Hemi. A 5.7-liter with variable-valve timing that pumps out a whopping 360 horsepower and an even more impressive 390 pound-feet of torque. Serious numbers, and seemingly plenty of power to push around even a vehicle that weighs in at a rather chunky 5,133 pounds.

Turn the key and the Durango R/T (that’s R as in Road, T as in Track) emits a nice rumble and the sound grows stronger as your right foot tips toward the floorboard, though the noise quiets nicely once you arrive at your cruising speed.

It’s just, well, it’s just that it seems to take too long to get to that point. The Hemi doesn’t reach its power peak until the tach reaches 5,150 rpm and torque doesn’t maximize until 4,250 revs. And it seems that the 4.7 first gear in the 8-speed automatic gear box is positioned more to save fuel than to punch thrust you immediately off the line.

On the other hand, with a big and heavy and V8-powered vehicle rated at only 14 miles per gallon in city driving and at only 22 on the highway, saving fuel is a worthwhile objective, and all the more so when the Hemi prefers to gulp mid-grade unleaded, though it also laps up standard 87 octane regular.

And once you’ve achieved your cruising speed, the powerful V8 and the 8-speed gearing work nicely together to keep you up with and power you around traffic. We also found the three-row SUV to be surprisingly nimble, not only when taking a turn but when it comes to maneuvering into a parking place. And high-speed dynamics figure to be even better if you wrap those 20-inch wheels with the optional Pirelli Scorpion all-season tires (Bridgestone Ecopia all-seasons are the standard tires on the Durango R/T).

We didn’t do any towing, but the V8-powered Durago is rated at 7,400 pounds with rear-wheel drive and at 7,200 with all-wheel drive.

Back to cruising speed… the Durango R/T is a comfortable and roomy cruiser. Ours was equipped with bucket seats for the first and second rows, and there’s 17.2 cubic feet of cargo room behind the third-row seats.

Speaking of seats, as we mentioned earlier, they’re done with red leather seating surfaces and are heated and ventilated up front and heated in the second row, which tumbles and folds when not needed for human occupants.

Our test version also was equipped with the optional technology and rear DVD entertainment options, second-row captain seats and a power sunroof. The technology package includes adaptive cruise control with stop, advanced brake assist, blind-spot and cross-path detection, full-speed forward-collision warning and lane-departure warning — all good things to have in an era when every other driver seems to be paying more attention to a smart phone than to smart driving.

The 2017 Dodge Durango also is available in SXT, GT and Citadel trim levels and with a variety of two-tone interiors.

For those who need both the room and accommodations of a large SUV and the dynamic capability of a high-performance vehicle, there’s the recently unveiled — and scheduled to go in sale in the fourth quarter of 2017 — 2018 Dodge Durango SRT. That one has a 475-horsepower, 392-cid Hemi V8 and has been certified by the National Hot Rod Association to sprint to 60 mph in 4.4 seconds while posting a remarkable 12.9-second time in the quarter-mile drag race.

Oh, and it also has Demonic Red Laguna leather and suede interior with carbon-fiber trim, and buyers get a full day of driving education at the Bob Bondurant School of High Performance Driving.