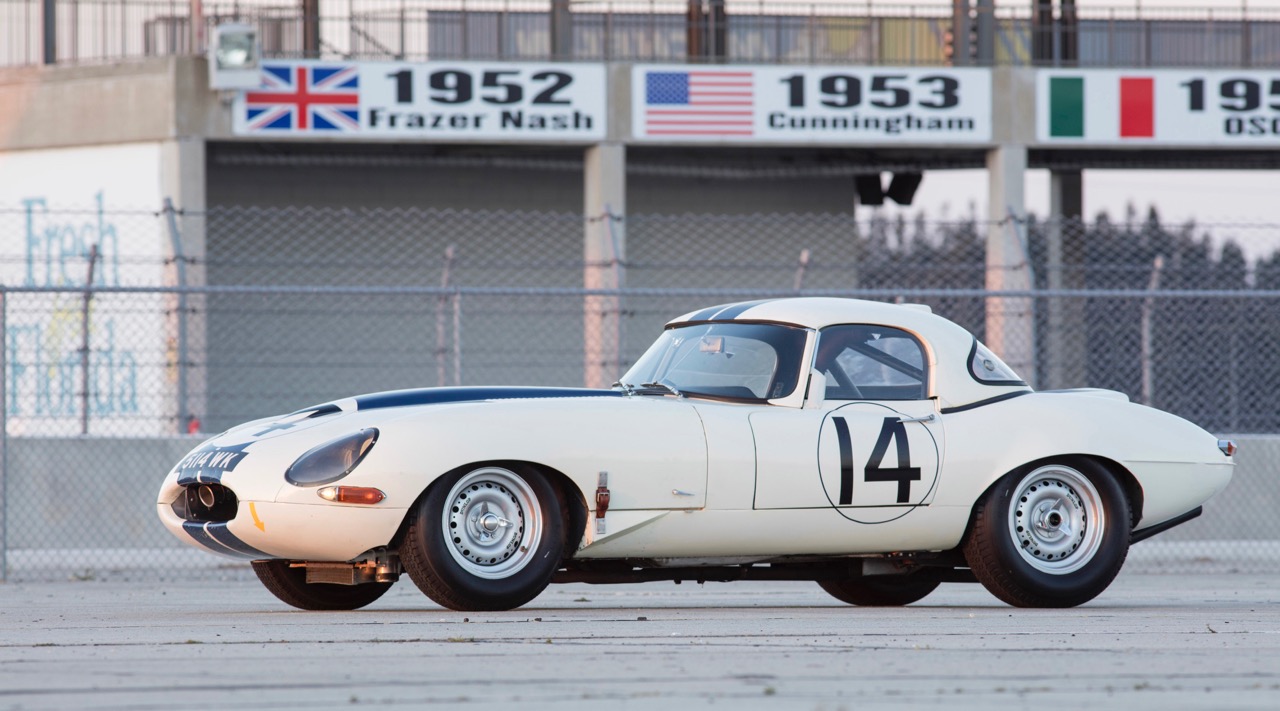 The Jaguar E-type Lightweight that Briggs Cunningham’s team raced at Le Mans, Road America and Bridgehampton in 1963 will be offered up for bidding August 18 at Bonhams’ 20th anniversary Monterey Peninsula auction at the Quail Lodge in Carmel Valley, California.

“The Briggs Cunningham Lightweight E-type scores so heavily on both counts that it is difficult to decide which is more of a star. You could make a good argument either way: the ultra-rare racing thoroughbred versus the all-American hero and entrepreneur.

“But the truth is that thinking about one without the other makes no sense because the Lightweight E-type would probably never have existed if it hadn’t been for Briggs Swift Cunningham II.”

In 1963, Cunningham’s team served as the Jaguar factory effort at Le Mans, where the car heading to auction — chassis S850664 — raced wearing the No. 14 as part of a three-car entry. The car was driven by Walt Hansgen and Augie Pabst but was retired after the first hour of competition. It later raced in the Road America 500 in Wisconsin and finished fourth in the Bridgehampton 500 on Long Island.

After it was retired from competition, the car became part of the Cunningham Museum. Cars from the museum later were sold, with the No. 14 Lightweight going in succession to such collectors as Lord Bamford, Paul Vestey and Campbell McLaren. The car has recently been on display at the REVS Institute/Collier Collection museum.

“Known as the ‘GTO killers,’ these lightweight competition Jaguar E-types were faster on most tracks than the fabled Ferrari 250 GTO,” Bonhams noted in its announcement. “As some of the most successful and iconic sports-racing cars ever produced, they are among Britain’s most celebrated cars and rarely, if ever, come up for sale.”

Bonhams notes that the car is “genuine, highly original, well-documented and eligible for most of the world’s great races, rallies and concours events; it is a car of immense distinction.”

Bonhams did not offer a pre-auction estimated value for the car, but in January, it sold another 1963 E-type Lightweight for a record $7.37 million.

Jaguar built a dozen E-type lightweights for racing. The one that sold in January had won the 1963 Australian GT Championship

Bonhams prepared a special video to showcase the car.

Meet the Maverick, and this one is neither a TV gambler nor a Ford