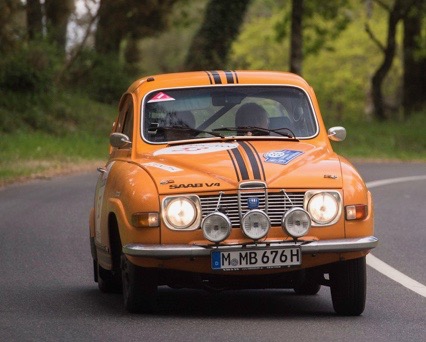 Don’t be fooled by the name of the Tour Auto. This is not a mere retrospective tour for the faint of heart. Usually, classic sports car rallies are designed to enjoy the scenery, to absorb the nostalgia of travel through the old cities, and even have coffee breaks built into their schedules.

But in its 26th running, Tour Auto keeps to the spirit of the original Tour de France, a cross-country race for sports cars staged from 1951 through 1986.

Yes, legal speed limits on the roads remain, but Tour Auto includes very competitive timed stages, some held at four race tracks along the 2,500 kilometer route, others on certain sections of the public roads.

Nearly 250 cars rolled up to the starting line in the Grand Palais dead smack in the center of Paris. Actually, they were pushed into and out of the grand building, where engines are not allowed to be run because of the danger emissions pose to the building’s historic and delicate structure.

Cars racing around one of the four tracks on the route

This year, and for the first time, the cars headed from Paris toward Bretagne, on the coast, though stopping first at the most famous race track in the world — Le Mans.

Even though this rally tends to be one of the more harder one on the cars and its occupants, it nonetheless draws a variety of cars. This year they included a good variety of Minis, Alfa Romeos, Lancias, Porsches and Fords, as well as Ferraris and, this being France, even a Renault Alpine’s DB-Panhard.

Perhaps to some’s surprise, the field included some American Iron — a Studebaker coupe, Chevrolet Camaro Z/28 and Ford Galaxie — not the first cars that pop-up in your mind for rallying on small French country lanes.

Yet that’s part of the attraction, that you do see a wide variety of interesting cars with most drivers eager to show off their skills in the timed segments along the route. To enhance the challenge, they are listed in the road book but without markers or distances indicated.

For the locals, these are the spots that you want to be watching. Unfortunately for the drivers, such places are where they tend to make the most mistakes, sometimes leaving their cars in less-than-pristine condition.

Yet, with a waiting list for next year, the tour is immensely popular and that the competitive spirit does remain alive and well.

This year, after the arrival in Biarritz, near the Spanish border, the organization held the tour’s first night stage finish, perhaps just to see who was still awake after five days.

Pity we were not there to see it. We were chasing after the rally in a Mini Cooper S “service car” and, for us, the tour ended on Day 4, when the Mini gave a “good showing” for the locals during one of those special stages.

Dirk de Jager
A racer's son, Dirk de Jager is a Belgian-based photographer raised in a family of car enthusiasts. While his passion started out with classic Italian cars, it has expanded to include other nationalities with a preference for cars of the 1930s to 1950s. Dirk can often be found at top classic car events in Europe and the United States, whether on a racetrack, rally or concours field. For the past decade he has photographed numerous rare classic cars either for international magazines, commercial work, auction company's or private collectors. In addition to photography, he tests classic cars and assists collectors in managing their collections and showing cars at leading concours.