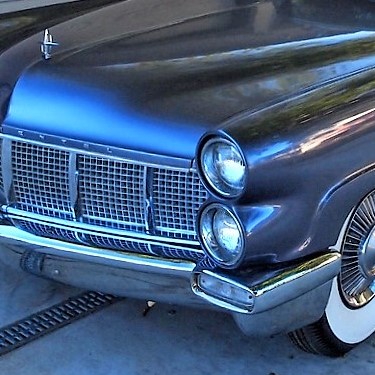 No, your eyes do not deceive you. This 1956 Lincoln Continental Mark II has a set of quad headlights up front. Certainly not a factory design, it was a custom treatment created decades ago by a well-known, eccentric and prolific collector of Lincolns.

This unique Mark II, which goes to auction during Russo and Steele’s fifth annual Newport Beach, California, was owned and customized by the late J.C Daniels, who collected hundreds of Lincolns after striking it rich as a Texas oilman. Before going into the oil business, he owned a Lincoln dealership, and apparently never lost his affection for Ford’s luxury cars.

When Daniels died in 2000, he owned 388 Lincolns, including 47 Mark IIs, which were all auctioned off in 2002, including this Continental.

“This car was the rare and odd one in the group,” according to Russo and Steele’s catalog description. “For some reason, J.C. decided to create a four-headlight Lincoln. At the time Mark IIs were built, no cars were manufactured with four headlights. This did not happen until 1957 when Mark IIs were out of production.

Daniels, who started out his career with a body shop, had three shop workers perform the customization of this Lincoln, which took some courage since Continental Mark IIs have always been valuable, limited-production luxury cars; when new, these hand-built coupes were more expensive than Rolls-Royces.

The headlight alteration was professionally done and still looks immaculate, according to the auction catalog. The car stands just as it did when it left Daniel’s estate, aside from some freshening and new tires to make it roadworthy.

Other than the quad headlights, the Continental looks to be in stock condition, which only adds to the effect of looking like it came that way from the factory. This head-turning Lincoln would be sure to grab lots of attention, or else howls of protest from dedicated collectors of the always popular model.

Russo and Steele, which holds its Newport Beach auction June 2-4 at the Newport Dunes Waterfront Resort, is offering the Continental at no reserve. For information about the sale, visit the auction website.