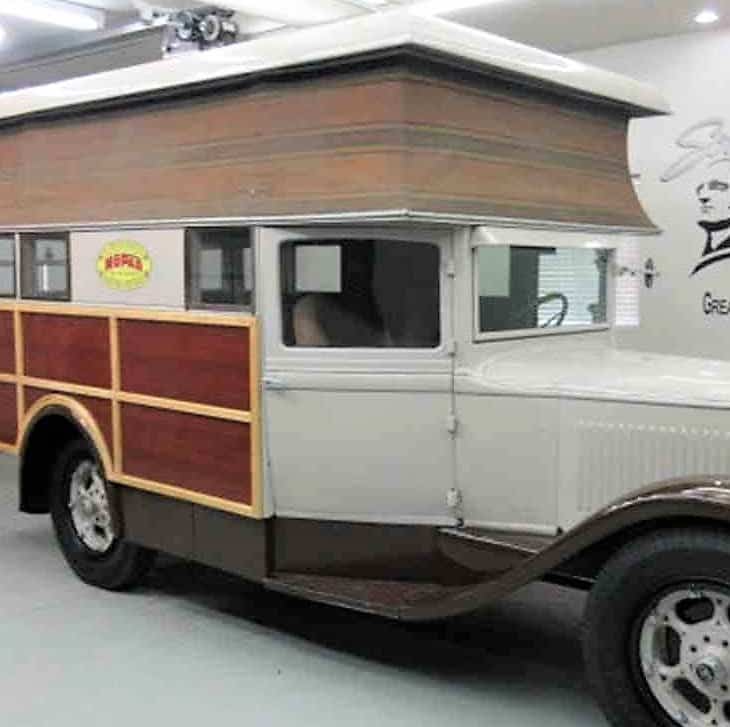 Back in the 1920s and ’30s, motorhomes and campers were generally known as “house cars,” a fairly accurate description of the house-on-wheels approach of the day. Some of them were more like gypsy caravans with motors, while others were relatively sophisticated camping vehicles.

The Pick of the Day is a 1931 Dodge Brothers house car with a then-unusual elevating roof, which presages today’s motorhomes and trailers with rising or extending sections. When driving, the roof lies flat for a lower and more-aerodynamic profile. When parked, the roof can be raised about two feet, a fabric structure providing the four walls.

This house car has an interesting back story as well, as noted in the brief description provided by the Sioux Falls, South Dakota, dealer advertising the truck on ClassicCars.com. It seems that a dentist in Alhambra, California, wanted to take his practice on the road, so he commissioned the camper to use both as a mobile dental office and living quarters.

Although it dates from the economically depressed 1930s, the Dodge is no Grapes of Wrath family transporter (the novel’s Joad family traveled in and on a tattered Hudson cobbled into a truck for the perilous trek from Oklahoma to California). The house car has been restored to original, the seller says in the ad, with new paint and wood paneling, and mechanical refurbishing.  The two seats look like they were replaced with modern items.

For the more relaxed driving environment of the time, the Dodge was powered by a fairly puny 196 cid flathead four-cylinder engine that would get you there, but slowly. Any driving today would have to be on back roads, and would require patience and skill with the four-speed manual transmission.

But the house car is a handsome collector’s item that could be a centerpiece in a museum, as well as a fun weekend traveler for car shows and meets of like-minded vintage-camper fans. Think of all the hardy folks who travel cross-country in vintage Volkswagen bus campers, which have hardly more performance than this interesting relic.

The asking price for the historic camper is $42,975, which seems fair enough.