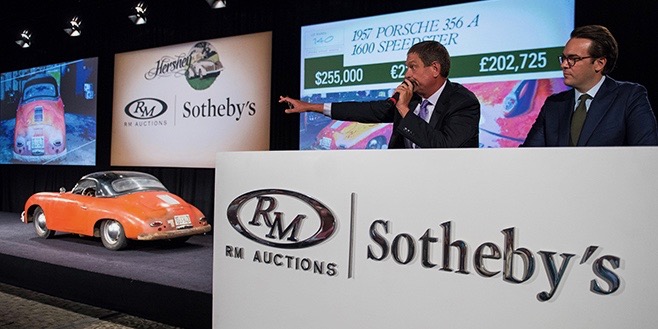 From late in 2015 and into the fall of 2016, RM Sotheby’s collector car auctions allowed a “fly on the wall” to travel with its staff as it ventured around the world seeking cars to fill the dockets for its auctions. The result is a 10-part television series, Million Dollar Car Hunters.

The hour-long programs are produced by Waddell Media under commission from BBC Worldwide and Britain’s Channel 4, although U.S. distribution has yet to be announced. However, the television production company based near Belfast, Northern Ireland, has a well-established relationship with the Discovery, National Geographic and A&E cable networks in the U.S. The programs also will be seen on BBC Canada.

“The program provides an exclusive behind-the-scenes look at how the RM team identifies potential auction vehicles, researches their histories, and ultimately offers them for sale in some of the world’s most glamorous auction locations,” RM Sotheby’s said in a news release.

“Each episode follows three separate story lines featuring car specialists — or ‘hunters’ — on their detective trails to find some of the most coveted collector vehicles on the planet.

“The show focuses on the ‘thrill of the hunt’ for RM specialists based out of London, Los Angeles and Chatham, Ontario, before climaxing with the real-life jeopardy of each auction.

“There are trials, tribulations, successes, surprises, disappointments, and more than a few laughs along the way. And then of course, there are the cars, with the show shining a spotlight on and sharing the fascinating histories of a truly diverse group of automobiles, from the multi-million-dollar Ferrari 290MM once driven by Fangio, to a Le Mans-winning Jaguar D-type, the world’s first Shelby Cobra, and even a hearse once owned by John Lennon and a rusting Iso Grifo ‘barn find’.”

The news release included a link to video of the show’s title sequence.

“All of us at RM believe we have the best jobs in the world, and it is such a privilege to be able to share the excitement and challenges of our work with a global audience,” Ian Kelleher, chief marketing officer for RM Sotheby’s, says in the news release.

“We’re enthusiasts to the core and hope the series not only conveys our incredible passion for the collector car hobby, but inspires others to join the fun. Whether you are a car-lover or not, I think you’ll find the 10 episodes highly compelling viewing.”

“We are privileged to have been allowed such unique access to RM Sotheby’s and their specialists globally,” added Jon-Barrie Waddell, executive producer of the series. “It has resulted in an unprecedented exploration of the luxury classic car world, told through fascinating characters and stories, and most importantly, showcasing the world’s greatest cars from all eras.”

Although only officially announced on April 21, the programs already are being televised in Australia, Poland and South Africa.