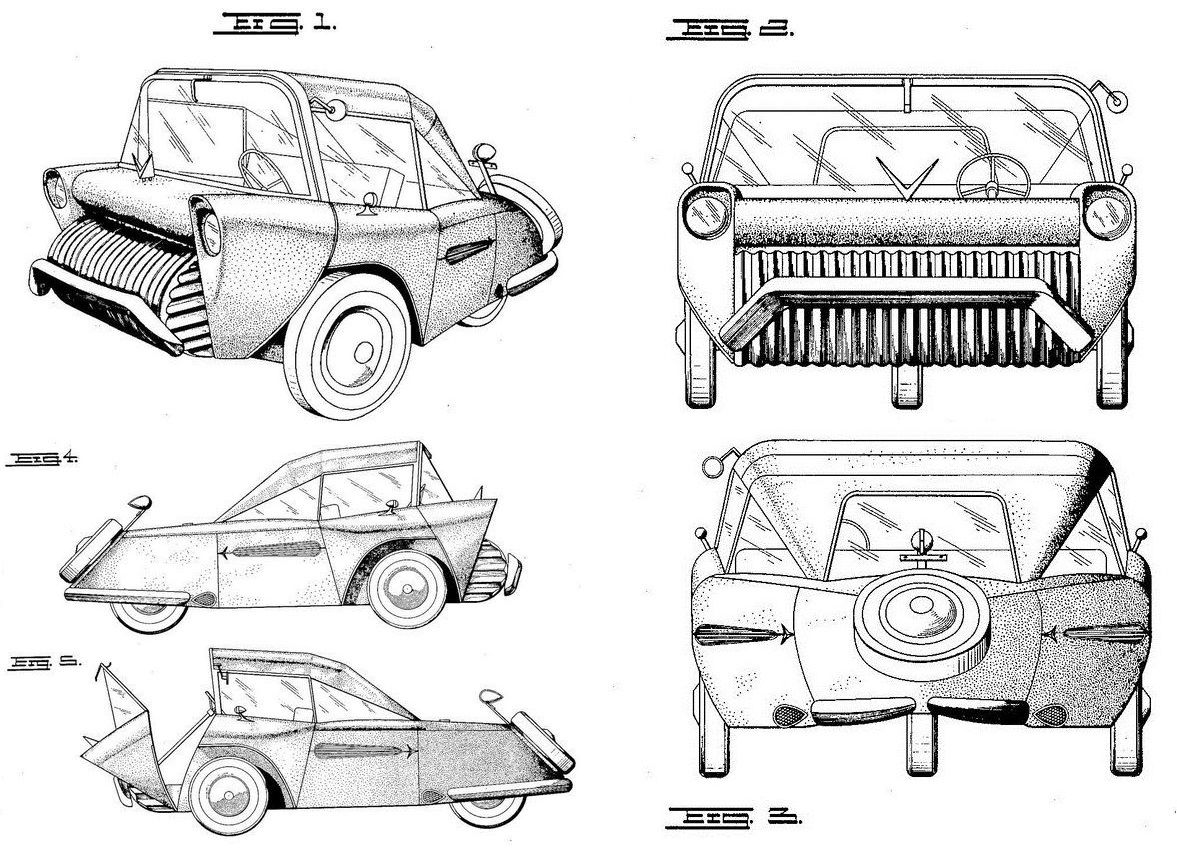 The Gilmore Car Museum in southwestern Michigan has  inherited a collection of over 396,000 automotive patents for both foreign and domestic brands. The collection represents paper duplicates of automotive-related patents from 1790 to 1999, as well as a comprehensive and searchable database.

According to the museum, the patents were originally collected, starting in 1911 by the American Automobile Manufacturers Association and later was given to  the Society of Automobile Engineers.

“This Automotive Patent Collection is an amazing treasure trove of incredible history,”  Richard Bowman, director of the Gilmore Car Museum Research Library and Archives, said in a news release.  “Patents represent the progression of an idea to finished product and, ultimately, to an industry–the entire evolution of the automotive industry is here.”

The non-lending Research Library and Archives of the Gilmore Car Museum is open to the public during weekday museum hours. It holds nearly 250,000 automotive advertisements, artworks, brochures, repair manuals, books and early trade publications, as well as special collections dedicated to the Cadillac, Checker, Franklin, Pontiac, and Tucker brands.

The AACA museum in Pennsylvania will stage a “Cars 4 Critters” gathering Saturday to benefit homeless animals. The museum’s  annual CARnival Car Show is June 17 and  is open to all makes, models and years of vehicles and features  activities such as tailgating on the lawn, a variety of vendor booths, family-friendly activities, entertainment and valve-cover racing.

The Blackhawk Museum in the Bay Area hosts the Northern California Corvette Association’s 37th “A Legend on Display” Corvette Car Show on Saturday, followed by the fourth annual Carroll Shelby Memorial Classic Car Show on May 13.

May 14, the British Motor Museum holds its Gaydon Spring Classic, open to cars 20 years and older.

The Auburn Cord Duesenberg Museum’s next Cars and Coffee gathering on the Plaza is set for May 20, with similar events scheduled June 17, July 15, August 19 and September 16. Each event is free, takes place from 9 a.m. to 11 a.m. and is open to all vehicles: classic, exotic, muscle and favorite cars.

The Corvette Homecoming and Chevy International car show hosted by the National Corvette Museum is June 1-3 in Bowling Green, Kentucky. Ken Lingenfelter will be grand marshal. Anniversaries will be celebrated for cars produced in 1957, 1967, 1977, 1987 and 1997.

June 24 from 9 a.m. to 3 p.m. in the National Automobile Museum in Reno, Nevada holds the Women with Wheels Car Show. The event is exclusively for women entrants.

The AACA museum holds a Spring Fling Collectible Toy Show on April 30 from 9 a.m. to 4 p.m. On May 14, Mother’s Day, the museum will offer free admission along with a complimentary rose for the first 100 moms to visit.

America’s Automotive Trust, dedicated to securing the future of the collector car hobby, holds “Fast & Furious, the 2017 Wheels & Heels Annual Gala” on June 3 followed by “Cars & Cigars” on July 28, and the “Summer Ender Fender Bender” on Sept. 9, all at LeMay – America’s Car Museum in Tacoma, Washington.

On April 27, the Petersen Automotive Museum opens “Seeing Red: 70 Years of Ferrari” from 6:30 to 9:30 p.m. This special event includes cocktails, appetizers, live music and presentation, with a special tribute to legendary racer Phil Hill, hosted by his son, Derekl. A collection of Ferrari cars will be on display telling the story of the legendary brand’s legacy and advancements in automobile production.

The Auburn Cord Duesenberg Automobile Museum  stages Trivia Night on May 5 at 7 p.m., offering a $200 prize to the winning team of eight or fewer members. Participation is $15 and attendees are encouraged to arrive early to see the museum’s galleries and exhibits.

The America on Wheels in Allentown, Pennsylvania, holds it’s 3rd annual Heavy Equipment Petting Zoo on May 6 from 10 a.m. to 3 p.m., with children free to touch and experience all sorts of large construction-style vehicles

The Simeone Foundation Museum in Philadelphia holds a fundraiser gala event and auction on May 20 from 6:30 to 11 p.m. featuring a reception and dinner. The gala will benefit the SAFETY program, a non-profit organization committed to addressing the number one cause of death for America’s teens, automobile crashes.

The National Corvette Museum Bash is set for April 27-29 in Bowling Green Kentucky, an event that traditionally marks the rollout of the next model year Corvette. Seminar topics will include “What’s new in the 2018 model year?”  GM engineers and designers from Warren Tech Center and the Bowling Green Assembly Plant will be onsite to answer questions.

The National Automobile Museum offers a history symposium, “The 1970s: Activism: Voices for Change,” on April 26-27 from 4 p.m. to 9 p.m., and April 29 from 8:30 a.m. to 5:45 p.m. The discussion will feature national speakers, historians, authors and local scholars addressing a wide variety of topics such as the Iran hostage crisis, foreign policy, the impact of the ’70s on our modern-day world, the auto industry and even a humorous look at the decade’s culture, including fashion.

Owls Head Transportation Museum in Maine presents its final Winter Education Series program of the season  April 29, with a presentation on Katharine Wright, the independent and worldly sister of the famous Wright Brothers.

The National Sprint Car Hall of Fame & Museum in Knoxville, Iowa, is raffling an “Australian Sprint Car Vacation.” The winner receives two roundtrip airfares from the United States to Australia, seven nights in a hotel, and two tickets to all three nights of the Grand Annual Sprintcar Classic at Warrnambool. The winner will be selected on August 12 and need not be present to win.

The AACA Museum  offers travel opportunities to Cuba from June 2-10; to England, September 1-10; and to Italy, November 3-12.

April 30, the Gilmore Car Museum will host a Farewell to the Sports Cars open-house where guests will have a last look at iconic cars and mingle with the vehicle owners that help make this exhibit possible. At 2 p.m., the cars will be driven out of the exhibit gallery in a final salute to the Golden Age of Sports Cars.

The Lane Motor Museum in Nashville holds a driving experience that allows guests to get behind the wheel of one of the museum’s cars. The experience is available on June 23 and July 7, with each day having two groups of 10 people. Each driver will receive a lesson in how to operate their chosen vehicle and then will approximately 25 miles round trip to Percy Priest Lake and back.

The National Corvette Museum holds High-Performance Drivers Education on April 27-28. The program focuses on education, safety, and fun. Students are separated into groups based on road course driving experience, with most being assigned experienced driving instructors to help teach and enhance driving skill and enjoyment.

The Kansas City Automotive Museum holds its 2nd annual Scavenger Cruise on May 13.

The LeMay Marymount in Tacoma, Washington, offers driver education in Ford Model Ts.  From May through September, students can tour the historic 88-acre campus while learning how to drive a Model T.

The Simeone Foundation Automotive Museum hosts “Mopar or No Car,” an exhibit that runs from June 17-July 9 and is dedicated to the highest-performance race cars from Dodge, Chrysler, Plymouth and SRT.

May 19, the British Motor Museum shows “British Motoring Treasures: the British Motor Car in Fifty Objects.” The exhibition, which will run until March 2018, will showcase the depth and variety of the nationally designated collections held at the museum while telling the story of Britain’s motor industry using fifty key objects.