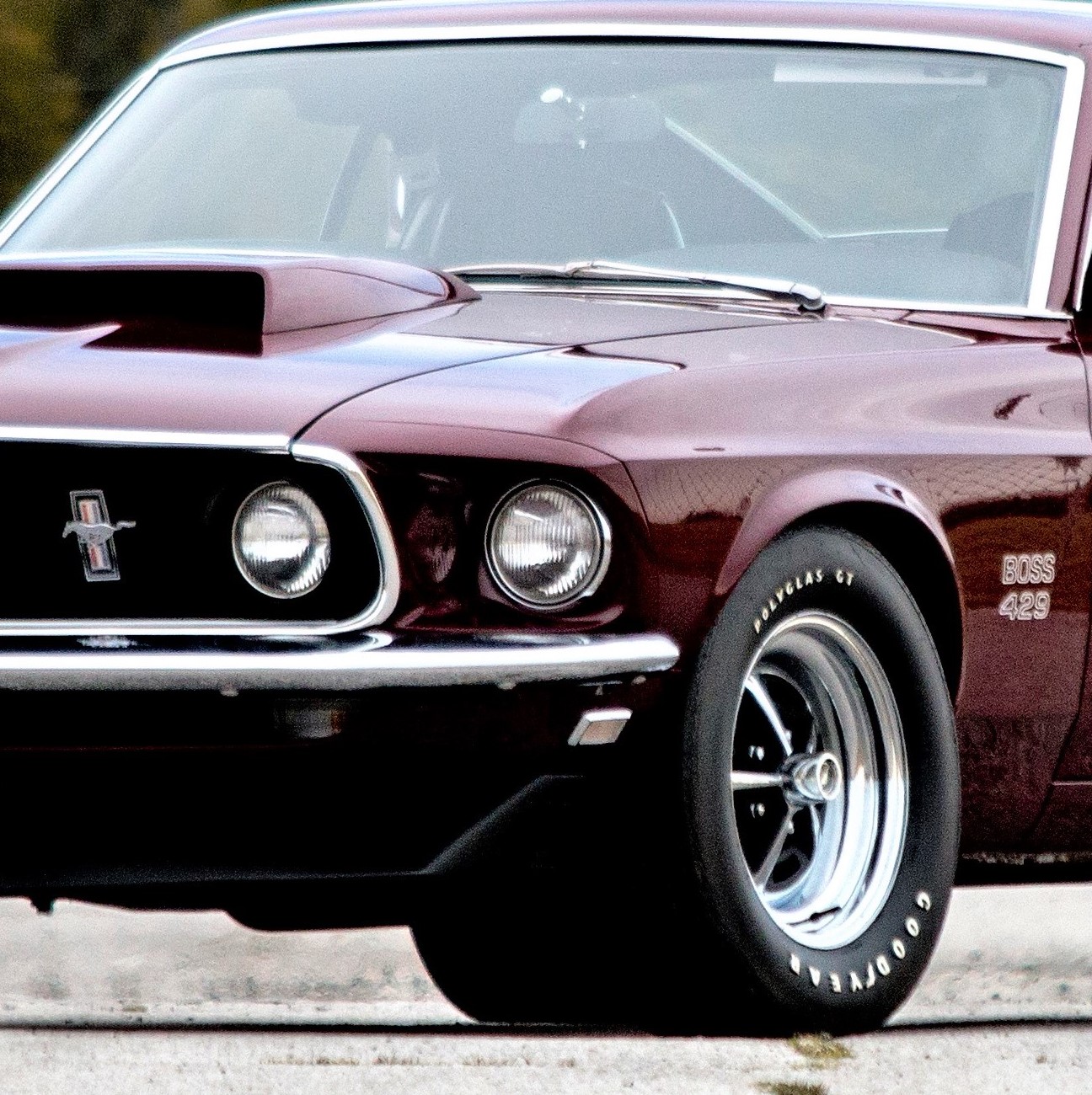 Yet the Boss 429 was an unlikely creation, a piece of high-performance art built by necessity. Just 1,358 of them were produced during the two model years, and they are highly sought after today, not just by Ford enthusiasts but by collectors who recognize how very special they are.

Two prime examples of Mustang Boss 429s highlight Indiana collector car auctions during May. One is a low-mileage original offered by Auctions America at its May 11-13 sale in Auburn. The other is painted in a rare pale-blue factory color and on the Mecum Auctions docket for its May 16-21 sale in Indianapolis, which marks the auction company’s 30th anniversary.

The Boss 429 came about because Ford needed to homologate its new “semi-hemi” 429 cid V8 engine for racing in NASCAR, where Dodges and Plymouths powered by the conquering 426 Hemi had been running away from the competition. Ford had to sell 500 cars powered by the 429 V8 to customers to make the engine eligible for NASCAR.

While the Ford Torino might have been a more-likely recipient – Torino was, after all, Ford’s NASCAR racer – the Mustang fastback was chosen instead to carry the 429 to the public because it was the automaker’s highly successful sporty image car, already performance enhanced in Shelby, Boss 302 and Cobra Jet models.

To wedge the mammoth engine into the narrow space under the Mustang’s hood, Ford turned to Kar Kraft of Dearborn, Michigan, which already had partnered with the automaker on other notable performance projects. Installation of the big-block with its huge exhaust headers required extreme alterations to the front suspension and brakes, widening of the inner front fenders and moving the 85-amp battery to the trunk.

The engineers also installed a thick anti-sway bar to the solid-axle rear suspension to compensate for the extra weight up front, the first production Mustang so equipped. The change resulted in a marked improvement in handling.

Notably absent was air conditioning, which would not fit into the packed engine compartment. The VIN for each Boss 429 starts with the letters KK, for Kar Kraft.

The result was a roaring beast on the drag strip, oval or road course, as well as being a thunderous presence on the street. The production Boss 429s were rated by Ford at a modest 375 horsepower, presumably because of legal and insurance issues, but contemporary testers rated the brawny V8 as above 500 horsepower, possibly nearing 600. The engine was also flexible and high-revving despite its large displacement, although Ford limited rpm to 6,200, again because of insurance concerns.

Auction America’s Boss 429 is a 1969 model that has been driven only 36,000 miles, according to the consigner, and appears to be largely in original condition other than a professional repaint in its factory color of Royal Maroon. The original black-vinyl interior and trunk are in excellent condition, the catalog says, and it has all its original factory decals and markings. Fully documented and certified with a Marti report, the Boss is expected to sell for $275,000 to $375,000.

The color of Pastel Blue was new for the 1970 Boss 429, and just 18 cars came out of the factory sporting the pale shade, according to Mecum Auctions’ catalog description. The 1970 fastback has fewer than 100 miles since a complete restoration in 2008, and a cosmetic refresh completed in February, putting this car in as-new condition, the catalog says. Looking immaculate in the catalog photos, and fully documented along with its Marti report, the car carries a pre-auction estimate of $350,000 $400,000.