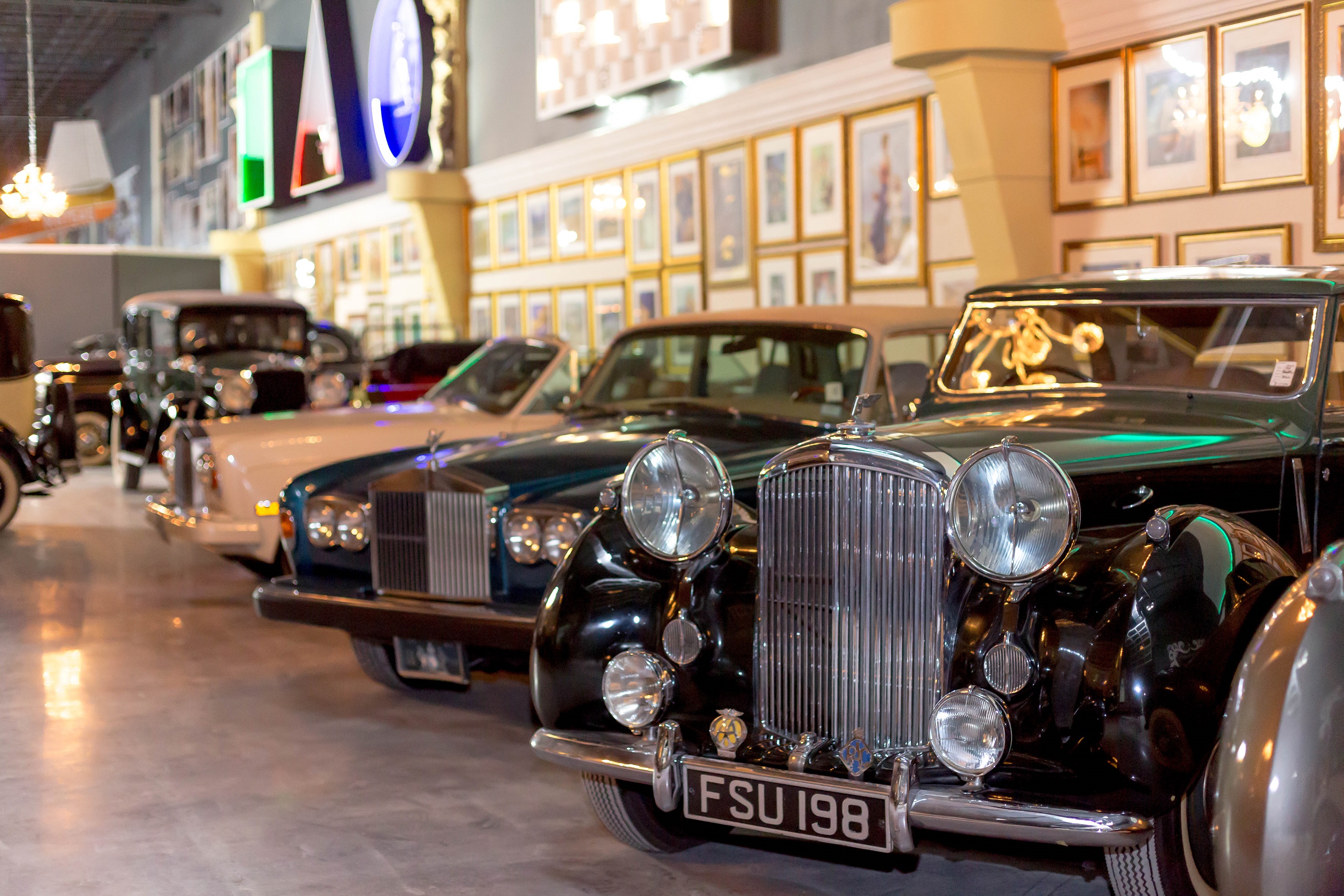 The Fort Lauderdale Auto Museum has opened its doors within Xtreme Action Park, an indoor entertainment complex in South Florida. The museum is the third created by real estate developer Michael Dezer. each composed of vehicles from his personal collection, which is estimated at 1,600 cars housed between Ft Lauderdale, Miami and Las Vegas.

The Fort Lauderdale Auto Museum opens with several themed collections including cars of the roaring ‘20s, the cars of Cuba, military vehicles, microcars from around the world and a collection of movie cars including the Delorean from Back to the Future and the 22-foot long Nautilus car from League of Extraordinary Gentlemen.

Dezer also owns the world’s largest private collection of James Bond vehicles, some are within the movie-car collection but are mainly at other locations. Dezer plans on rotating his collection between the three museums to maintain significant foot traffic throughout all spaces and attract local car enthusiasts.

The museum includes art installations throughout the space with paintings and sculptures from around the world as well as works created by local artists. The museum seeks to provide a home and outlet for up-and-coming artists to exhibit their work.

Admission for entry is $25; Florida residents have a discounted admission of $10. The museum is open Monday through Friday in the afternoons.

On Saturday, the Auburn Cord Duesenberg Museum’s Cars and Coffee gathering on the Plaza will kick-off the season. The following Cars and Coffee events will be held May 20, June 17, July 15, August 19 and September 16. Each event is free, takes place from 9 to 11 a.m. and is open to all vehicles: classic, exotic, muscle and favorite cars.

The AACA Museum celebrates National Mustang Day on April 17. Owners are encouraged to bring their cars to the museum and park in the front circle at the museum all day. Admission to the museum will be $7 for the day and birthday cake will be available. The museum will stage a “Cars 4 Critters” gathering April 22 to benefit homeless animals, followed by the museum’s annual CARnival Car Show on June 17. The CARnival show is open to all makes, models and years of vehicles in addition to activities such as tailgating on the lawn, a variety of vendor booths, a 50/50 drawing, family-friendly activities, entertainment and valve-cover racing.

The Gilmore Car Museum is set to start its weekly Wednesday Night Cruise-In on May 3. The second annual Donald Gilmore Pre-1942 Showcase Driving Tour and Car Show will take place at the museum on Friday, May 19 through Saturday, May 20. Pre-registration is now open for all pre-1942 original stock vehicles; no modified or hot rod style vehicles.

The Corvette Homecoming and Chevy International car show hosted by the National Corvette Museum is set for June 1-3 in Bowling Green, Kentucky. Ken Lingenfelter is grand marshal. Anniversaries will be celebrated for cars produced in 1957, 1967, 1977, 1987 and 1997.

The AACA museum holds an Easter egg hunt April 15 from 11 a.m. to 1:30 p.m. The museum holds a Spring Fling Collectible Toy Show on April 30 from 9 a.m. to 4 p.m. On May 14, Mother’s Day, the museum will offer free admission along with a complimentary rose for the first 100 moms to visit.

Through April 16, children 12 and under get complimentary admission to America’s Car Museum in Tacoma, Washington, with a paying adult. Activities for children include free five-minute slot-car races at the Miller Slot Car Circuit in the ACM Speed Zone.

America’s Automotive Trust, dedicated to securing the future of the collector car hobby, holds “Drive the Blues Away” presented by the LeMay Family Collection Foundation on April 21 at America’s Car Museum. Also scheduled are “Fast & Furious, the 2017 Wheels & Heels Annual Gala” on June 3 followed by “Cars & Cigars” on July 28, and the “Summer Ender Fender Bender” on Sept. 9.

On April 27, the Petersen Automotive Museum in Los Angeles holds “Seeing Red: 70 Years of Ferrari” from 6:30 to 9:30 p.m. The event includes cocktails, appetizers, live music and presentation, with a special tribute to legendary racer Phil Hill, hosted by Derek Hill. A collection of Ferrari cars will be on display telling the story of the legendary brand’s legacy and advancements in automobile production.

The Auburn Cord Duesenberg Automobile Museum in Auburn, Indiana, stages a Trivia Night on May 5 at 7 p.m. The night will offer a $200 prize to the winning team of eight or fewer members. Participation is $15 and attendees are encouraged to arrive early to see the museum’s galleries and exhibits, which are included in a Trivia Night ticket purchase.

The Simeone Foundation Museum in Philadelphia holds a fundraiser gala event and auction on May 20 from 6:30 to 11 p.m. featuring a reception and dinner. The gala will benefit the SAFETY program, a non-profit organization committed to addressing the number one cause of death for America’s teens, automobile crashes.

The Automotive Hall of Fame in Michigan announced it will induct Alberto Bombassei, August Fruehauf, Jack Roush and Ed Welburn during an awards gala slated July 20 in Detroit.

The Petersen Automotive Museum hosts a talk April 18 discussing how female motorists carved a space within American automotive culture. The discussion begins at 7 p.m. and is free to the public, but does not include museum gallery access or parking.

The National Corvette Museum Bash is set for April 27-29 in Bowling Green Kentucky, an event that traditionally marks the rollout of the next model year Corvette. Seminar topics will include “What’s new in the 2018 model year?”  GM engineers and designers from Warren Tech Center and the Bowling Green Assembly Plant will be onsite to answer questions.

The Auburn Cord Duesenberg Automobile Museum offers the fourth segment in its Curatorial Spotlight series with the presentation “Style and Sound: Art Deco and Jazz in the 1920s.” The presentation will take place on April 18 at 6 p.m., and is given as a tribute to Jazz Appreciation Month. The next Curatorial Spotlight is set for May 16 and features “Brothers & Bicycles: The Duesenbergs and The Wrights – a historical parallel on two sets of brothers whose contribution to the evolution of American transportation is undeniable.”

On April 22, the America on Wheels museum in Allentown, Pennsylvania, will present a discussion with David K. Whitlock and Vlad L. Pop on the future integration of autonomous vehicles. The discussion will focus on whether highways will be clogged with self-driving cars in 10 years, and whether classic and collector cars will still be able to be driven when surrounded by autonomous vehicles.

The National Automobile Museum in Reno, Nevada, offers a history symposium, “The 1970s: Activism: Voices for Change,” on April 26-27 from 4 to 9 p.m., and on April 29 from 8:30 a.m. to 5:45 p.m. The discussion will feature national speakers, historians, authors and local scholars addressing a wide variety of topics such as the Iran hostage crisis, foreign policy, the impact of the ’70s on our modern-day world, the auto industry and even a humorous look at the decade’s culture, including fashion.

The National Sprint Car Hall of Fame & Museum in Knoxville, Iowa, is raffling an “Australian Sprint Car Vacation.” The raffle winner will receive two round trip airfares from the United States to Australia, seven nights in a hotel, and two tickets to all three nights of the Grand Annual Sprintcar Classic at Warrnambool. The winner will be selected on August 12, and need not be present to win.

On Sunday, April 30, the Gilmore Car Museum will host a Farewell to the Sports Cars open-house where guests will have a chance to get a last look at iconic cars and mingle with the vehicle owners that help make this exhibit possible. At 2 p.m. the cars will be driven out of the exhibit gallery in a final salute to the Golden Age of Sports Cars.

The Lane Motor Museum holds a driving experience that allows guests to get behind the wheel of one of the museum’s cars. The experience is available on June 23 and July 7, with each day having two groups of 10 people. Each driver will receive a lesson in how to operate their chosen vehicle from a member of the museum staff, and then will line up to drive approximately 25 miles round trip to Percy Priest Lake and back.

The National Corvette Museum holds High-Performance Drivers Education on April 27-28. The program focuses on education, safety, and fun. Students are separated into groups based on road course driving experience, with most being assigned experienced driving instructors to help teach and enhance driving skill and enjoyment.

The LeMay Marymount is offering driver education in Ford Model Ts.  From May through September, students can tour the historic 88-acre Marymount Military Academy Campus while learning how to drive a Model T.

The Simeone Foundation Automotive Museum is hosting “Mopar or No Car,” an exhibit that runs from June 17-July 9 and dedicated to the highest-performance race cars from Dodge, Chrysler, Plymouth and SRT.

On Friday, May 19, the British Motor Museum shows “British Motoring Treasures: the British Motor Car in Fifty Objects.” The exhibition, which will run until March 2018, will showcase the depth and variety of the nationally designated collections held at the museum while telling the story of Britain’s motor industry using fifty key objects.

Audrain adds second 30 Under 30 class, and you may be surprised at its makeup