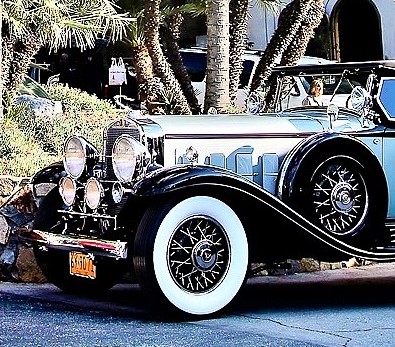 The 1936 Mulholland Speedster and a 1930 Cadillac 452 V16 won Best of Show honors at the fourth annual Benedict Castle Concours d’Elegance in Riverside, California.

The Speedster, built by Troy Ladd and the Hollywood Hot Rods team and owned by Bruce Wanta, was awarded the Contemporary Award while the V16-powered Cadillac owned by Fred Lax won the Classic Award.

The Benedict Castle Concours featured more than 200 vehicles, including prized lowriders and Japanese classics; custom creations by such famous builders as Ladd, Chip Foose and Rick Dore; classics of the 1930s; and such modern exotics as the McLaren P1 and Porsche 918.

The venue is a famed Riverside mansion turned event center built by Charles Benedict between 1922 and 1931. Originally named Castillo Isabella, the castle-like structure was designed by architect Henry Jekel, best-known for the Biltmore Hotel in Los Angeles.

The concours raised more than $300,000 to benefit Teen Challenge, a program for drug and alcohol addiction.

The Quail, a Motorsports Gathering, has announced its featured classes for the 15th annual automotive event held August 18 at the Quail Lodge and Golf Club during Monterey Car Week in California.

The most-exclusive event held during the Monterey Peninsula’s vintage-car celebration, The Quail accommodates just 5,000 spectators with tickets priced at $650 each; all the tickets have been allotted through a drawing held in February. The fee for showing a car is $800, which includes a pair of all-inclusive tickets plus goodie bags and other premiums.

Monterey Car Week is an automotive extravaganza of car shows, tours and collector car auctions that culminates in the annual Pebble Beach Concours d’Elegance, which marks its 67th year in 2017.

The Lamborghini Museum in Sant’Agata Bolognese, Italy, has opened at exhibit honoring the late Formula 1 champion Ayrton Senna, featuring every race car driven by the Brazilian driver from his debut to his tragic crash, as well as an extensive collection of photographs.

The Senna exhibit opened Wednesday and continues through October 9, alongside the Lamborghini Museum’s permanent collection. For information, visit the Lamborghini website.