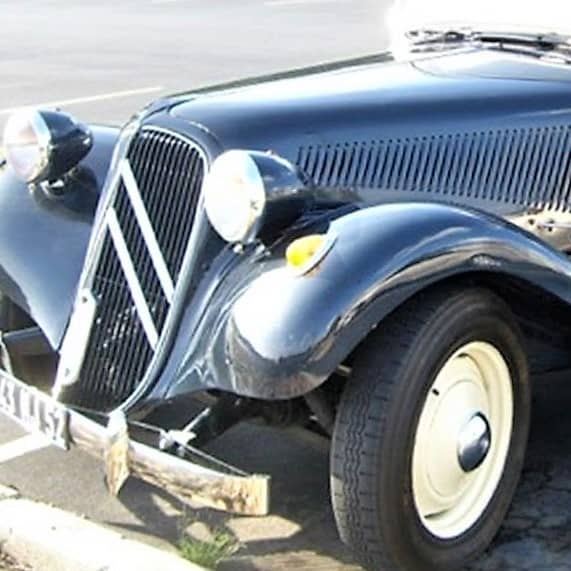 Say you want to go on a rally such as the Copperstate 1000 or the California Mille, but you want to drive something that is a little different, a car that will stand out from the crowd.

How about something Gaelic in flavor? Maybe not the swiftest mount you could choose but definitely stylish with an elegance that only the French could design. The Pick of the Day is just such a car, a 1955 Citroen Traction Avant 11B Normale sedan that most likely would be the only one on the rally route.

The Traction Avant is in excellent shape in and out, and it drives smoothly, according to the ad in ClassicCars.com from a private seller in Crossville, Tennessee, which seems like an out-of-the-way place to find a classic French automobile.

The seller has owned the car for nine years, according to the ad, and the odometer shows 96,000 kilometers, which translates to 59,650 miles. The car is nice but not perfect, the seller notes, with a couple of cuts in the headliner and some minor spots on the cloth seats.

The Citroen Includes the owner’s manual in English and the original maintenance sticker, which are rarely seen with these cars.  Debuted in 1934, these were advanced unibody vehicles with all-independent suspensions and front-wheel drive, or in French, traction avant. The 11B Normale is powered by a 57-horsepower four-cylinder engine.

So what’s not to love? I have seen a number of Citroen Traction Avants over the years, usually at the Carlisle Import show, and this one looks like a nice example. This car is eligible for literally every rally event in the world and would make for a fun, interesting and comfortable, though not terribly swift, way to participate in a vintage tour.

And since you rarely see Traction Avants entered in U.S. events, it would have a greater chance of being accepted for a major rally compared with more-commonly seen vintage cars.

There is no information in the ad about past restoration, although the car looks to be largely original. The asking price of $18,500 or best offer seems like an affordable route for gaining entry into a wide range of rallies and events with something that would stand out from the usual Alfas, Jaguars, Porsches, Corvettes and such.

Maybe not the fastest car on the road, but one that potentially would get the most attention.