Green Bay’s Motorama packs in a little of everything 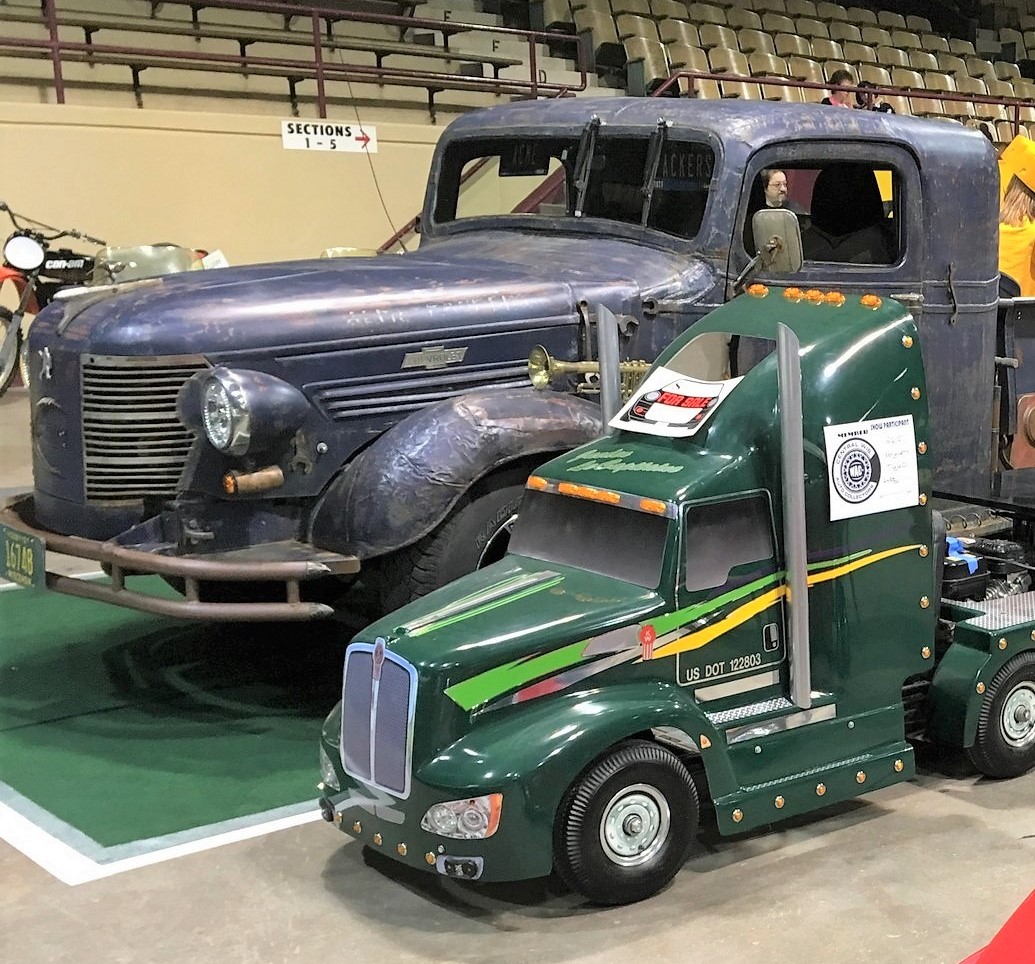 Green Bay, Wisconsin, is the smallest town to hold an NFL Football franchise, but it has one of the highest percentage of fans per capita. One could apply that same measure to the region’s car enthusiasts, who turned out in droves for the third annual NEW (North East Wisconsin) Motorama held at the Brown County Arena in the shadow of the Green Bay Packer’s Lambeau Field.

So, what is the difference between an “autorama” and a “motorama?” Apparently, a motorama celebrates anything with a motor in it, which in the Upper Midwest means classic cars, trucks, hot rods, dirt-track racers, motorcycles, snowmobiles, golf karts, tractors, trikes and a few things you just had to see to believe.

The truth is, after attending plenty of stuffy cars show that cater to the tea-and-poodles crowd, it’s fun to attend an unpretentious show with no expectations and plenty of surprises. This show might be low brow, but it’s certainly not low quality. There were some unique and really creative automotive expressions on display, with plenty of tips to glean for your next project.

There were, of course, the requisite Mater tow-truck from the movie Cars and a Back to the Future DeLorean complete with Flux-Capacitor, which young attendees never tire of seeing. But how about a street-rod built like a giant shopping cart? Or an Empire Strikes Back Ewok Speeder bike?

Diesel-powered Rat Rods are always interesting, and a Deutz-powered flatbed truck had an imposing presence. Trucks and station wagons remain an area of new growth in the classic car hobby.

Even a native Tahitian would stop and admire the pristine collection of vintage Ski-Doo snowmobiles on display. Vintage sleds are a dangerous hobby to get into; there are so many interesting makes and models at relatively cheap prices that a collector could fill his garage and basement in no time.

Unlike many custom car shows, the NEW Motorama makes a sincere attempt at outreach to kids and young enthusiasts. Youngsters lined up to construct toy Corvettes out of stamped aluminum, learning basic skills of tools and metalworking. These activities made for a family-friendly day as well as seeding interest for the future of the hobby.

Other interactive events featured a metal-forming exhibition by master fabricator Ron Covell, and the “Brushworkz Panel Jam,” which hosted about a dozen pinstripers and airbrushers producing custom pieces to be auctioned-off daily for charity. Especially encouraging was seeing young men and women taking up this nostalgic form of American folk art.

Nicely restored cars were on hand, too. A properly-restored AAR Cuda was on display, always rewarding because no singular make of car seemed to have lived as hard as ’70s Mopars.

Looking with fresh eyes, you can forgive the styling stigma that dogged Edsels at introduction and see a 1958 Pacer as the truly striking car that it is. A final-year 1980 International Scout sporting the rare Nissan-built inline-6 turbodiesel gathered lots of attention; a throwaway truck for the past 30 years, this black-and-orange-striped off-roader would be welcomed now in the garage of many a Hollywood celebrity.

An extremely interesting motorcycle display brought out an unexpected trove of British-built delights, including an early BSA, a Norton single and a streamlined Ariel. Keeping with the International Harvester theme, a custom Harley featured IH livery and a turbocharged twin.

A couple of mid-seventies Japanese café customs harkened back to “The Toecutter” look from the original Mad Max film and have a great aesthetic. An ultra-rare Buell RR1000 was a fascinating look at the company’s early efforts.

The next time you see a snowy Green Bay Packer game on television and watch those shivering masses of fans, don’t feel too badly for them. You need only remember the warm and interesting garages that they are going home to.