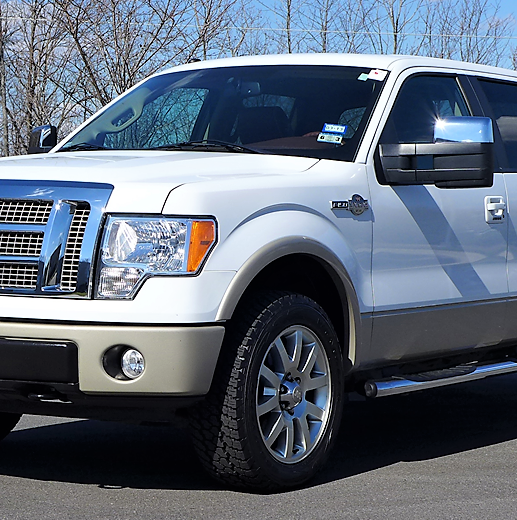 The 2009 Ford F-150 King Ranch Super Crew pickup truck that former President George W. Bush purchased after leaving the White House makes its third trip to a Barrett-Jackson auction this week. Once again, it will be sold to benefit a charitable cause.

The big white-and-tan pickup, which Bush drove on his ranch in Crawford, Texas, will cross the block during Barrett-Jackson’s sale in Palm Beach, Florida, which takes place today through Saturday. All proceeds from the sale will benefit Community Foundation of Cleveland and Bradley County, Tennessee.

The F-150 was last seen at Barrett-Jackson’s Palm Beach auction in 2013, where it raised $350,000 for the National Guard Youth Foundation. In January 2013, the truck made its debut on the Scottsdale auction stage, raising $300,000 for the Fisher House Foundation that assists military veterans and their families.

The Presidential pickup goes on the block a week after a vehicle connected with the current GOP occupant of the White House, a 2009 Ferrari F430 coupe originally owned by Donald Trump, sold at a premium $270,000 by Auctions America in Fort Lauderdale.

Bush’s pickup is one of five vehicles that will cross the block for charity at Barrett-Jackson’s Palm Beach auction, with every dollar of the hammer prices going to the designated beneficiaries. The others are:

• The rights to the first retail production of a 2018 Chevrolet Camaro ZL1 LE, with its 650-horsepower supercharged V8 backed by a six-speed manual transmission. That sale benefits the United Way.

• The sixth of just 50 2007 Ford Mustang GT custom fastbacks built by Sanderson Ford, which will sell to benefit The Darrell Gwynn Chapter of the Buoniconti Fund to Cure Paralysis.

• A 1969 International Travelall, V8-powered and driven just 58,000 miles, that is being sold to raise funds for the Boy Scouts of America.

Charity auction sales, for which Barrett-Jackson donates its time and waives all fees, have become over the years a signature part of the Scottsdale, Arizona, company’s auctions.

For information about the Palm Beach sale, visit the auction website.