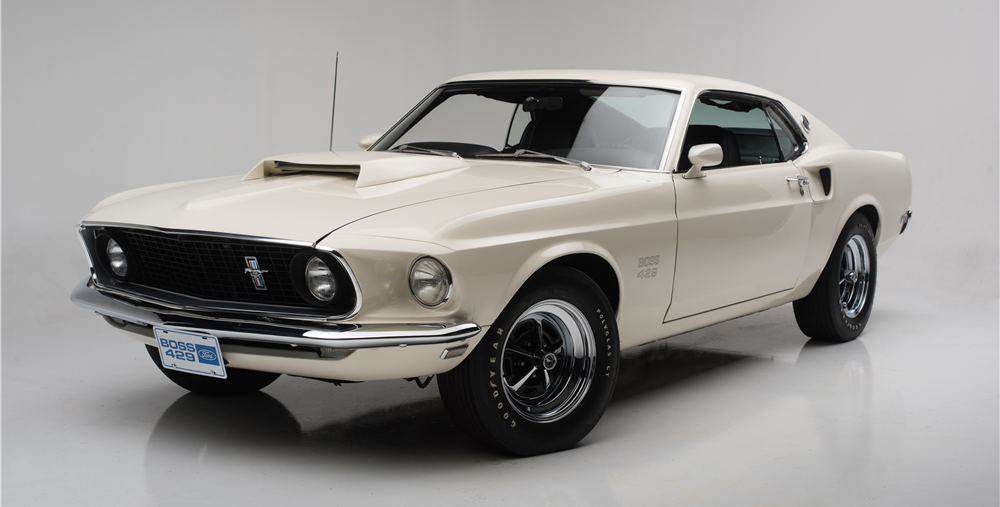 Editor’s note: This is the final in a 10-day sponsored series featuring cars to be sold April 6-8 during Barrett-Jackson’s Palm Beach auction.

By the late 1960s, Ford was losing ground in NASCAR to tough competition from Chrysler’s legendary 426 Hemi engine. Its response was to create a hemi-head engine of its own, the 429.

For the engine to be approved for use in racing, it had to meet the homologation requirements and be fitted into at least 500 street cars. The decision was made that the Mustang would be the platform to house the new engine, thus the Mustang Boss 429.

With the new engine being so large, the Mustang’s engine bay needed to be modified to fit everything in. Rather than modify the cars in-house, Ford partnered with Kar Kraft, conveniently located right there in Dearborn, Michigan, to widen the engine bays and install the motors. In addition, Kar Kraft relocated the battery to the trunk and added a 3/4-inch rear sway bar to help with the weight distribution in an attempt to help offset the heavier weight in the nose.

The cars were dramatically underrated from the factory at 375 horsepower but put out well over 500.

For 1969, Ford produced 857 Mustangs and two Mercury Cougars equipped with the Boss 429 package.

Buyers were offered a choice of five colors, but black was the only interior option available. The cars were rather mild in their street appearance, with the only distinguishing features being the large, fully functional hood scoop and a small “BOSS 429” decal on the front fenders.

Offered with a reserve during Barrett-Jacksons Palm Beach auction, this 1969 Boss 429, also known as KK #1717, is one of 271 cars made in Wimbledon White and came well-equipped from the factory with options such as the Traction-Lok differential, 4-speed close-ratio transmission, power front disc brakes, deluxe interior, functional front spoiler,  and completion suspension.

It features its original matching-numbers engine and transmission documented with a Marti Report.

The engine received a full rebuild, completed in August 2016, by a Boss 429 specialist in Scottsdale, Arizona, with the entire process being photo-documented.