72nd Glidden Tour revival will ‘Meet in the Middle’ 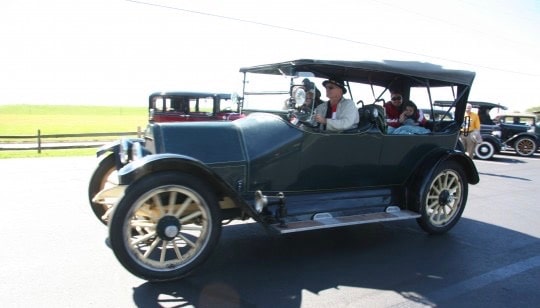 ‘Meet in The Middle” is the theme for the 72nd Revival AAA Glidden Tour which is expected to attract hundreds of pre-1943 vehicles from all corners of the country to head for Hastings, Nebraska, for a week-long festival from September 17-22.

“This will be the first time a revival Glidden tour has taken place in Nebraska,” event chairman John Nikoydm writes on the tour website. “In 1909 an original Glidden passed through Nebraska in the same area that we will be touring in 2017.”

The Glidden Tour dates to 1905, when a horseless carriage event was staged to demonstrate reliability and to encourage tourism. The title pays homage to Charles Jasper Glidden, an early executive of the Bell Telephone Company and benefactor of the drive.

Glidden and his wife, Lucy, were the first people to circle the world in a motorcar, a British-built Napier, a feat they and their mechanic accomplished in 1902 and repeated in 1908.

The first Glidden Tour started in New York and ended in St. Louis, at the Louisiana Purchase Centennial Exposition, with 77 motorcars participating.

The original tours ran through 1913, were conducted on roads that were primitive at best, and that took their toll as only 198 of the 322 participants over those years actually finished the courses.

But organizers felt the events had accomplished their purpose.

“The automobile had proven its reliability. Good roads were now being built. Fair motoring laws were being enacted,” Nikoydm notes. “And best of all, there was now one car for every 35 persons in the country as compared to one car for every 1,000 persons when the tours began.”

The revival tours were launched in 1946 by the Veteran Motor Car Club of America and have been held annually since, with support from the AAA and recently with the Antique Automobile Club of America as well.

For more information, or to register for the tour, see the Revival Glidden Tour website.