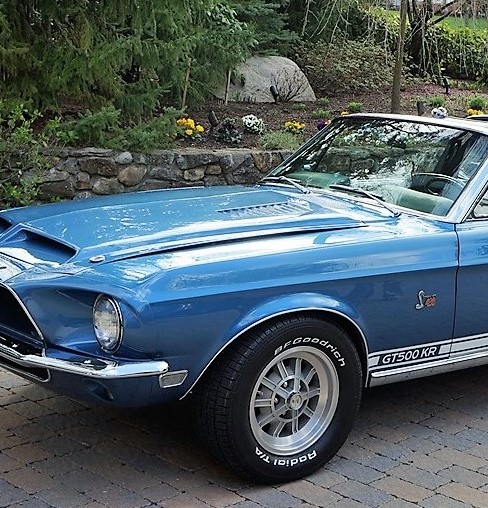 Barrett-Jackson holds four auctions every year and each one has its own character, with certain types of collector cars hitting the spot among bidders and spectators depending on the venue.

At the Palm Beach, Florida, auction, the focus is on convertibles, popular in the relaxed atmosphere for cruising along the coastline. The upcoming sale in West Palm Beach, which takes place April 6-8, has stocked a boatload of open-air pleasure craft among about 500 collector cars that will cross the block, all of them at no reserve.

Not all the convertibles are so relaxed, though, such as the mighty 1968 Ford Shelby GT500KR originally owned by actor Lee Marvin. With its potent 428 cid V8, the Shelby is one of just 518 produced as convertibles, and one of just 231 in Acapulco Blue. Its celebrity provenance is accentuated by a Carroll Shelby signature and personal message to Lee Marvin, one of the greatest character actors in Hollywood history.

A couple of hot ragtops from Chevy on the docket are the 1967 Corvette 427/390 in Rally Red with a black hood stinger, and an all-original 1971 Chevelle SS L55 in nicely preserved condition and featuring every option available that year.

“We’re bringing some top-down fun to the Sunshine State with some incredible convertibles during our 15th Annual Palm Beach Auction,” Craig Jackson, chairman and CEO of Barrett-Jackson, said in a news release. “Convertibles and roadsters of every kind have garnered incredible attention at our events, especially in Florida.”

Among more-recent convertibles is a rare and highly desirable 2003 BMW Z8 Alpina roadster, one of only 555 of this performance version of the Z8 offered that year. The sale of the BMW, which has been driven just 36,000 miles, includes its removable factory hardtop with storage stand.

Other special convertibles offered by Barrett-Jackson in Palm Beach include a 1956 Chevrolet Bel Air finished in Sierra Gold poly with Adobe Beige, a 1988 Rolls-Royce Corniche II with 41,000 original miles, and a 1957 Thunderbird that has received a complete frame-off restoration.

As usual at Barrett-Jackson auctions, there will be plenty of Corvettes to choose from, with 35 of them on the docket. There include six low-mileage 2015 and 2016 models from the Chevrolet Collection that were used for marketing and promotion across the U.S. Among them, a black 2015 Z06 that has been displayed at past Barrett-Jackson auctions, the Woodward Dream Cruise and Corvettes at Carlisle.

From Germany comes an iconic 1961 Volkswagen 23-Window Deluxe Microbus that the auction catalog says has been restored down to the smallest detail. At the other end of the spectrum is a 1996 Porsche 911 Turbo in Guards Red with a black leather interior, 3.6-liter turbocharged flat-six engine and six-speed transmission.

The custom Pantera was built by Sam Foose in the 1970s

A one-of-a-kind featured custom is the 1972 De Tomaso Pantera roadster concept car built in the 1970s by the legendary Sam Foose, father of Chip Foose. The Pantera is a striking hand-built custom done in the style of a Bertone Alfa Romeo concept named Carabo designed by Marcello Gandini .

As the story goes, Sam Foose wanted to purchase Carabo, and when he was turned down, he built his own version on the chassis of a Pantera with the 351cid Ford V8. Foose eventually sold the car, but his son Chip wanted it back, so he searched for Carabo and found it for sale by a well-known custom-car dealer. Foose traded his vintage Cadillac for the Pantera.

Chip Foose has kept the car for a number of years, but it will be sold at no reserve in Palm Beach. The car is in original condition and while it has some cosmetic imperfections, it is said to run well and would attract loads of attention everywhere it goes.

Barrett-Jackson’s Palm Beach auction takes place at the South Florida Fairgrounds from April 6 to 8. For information, see the auction website.