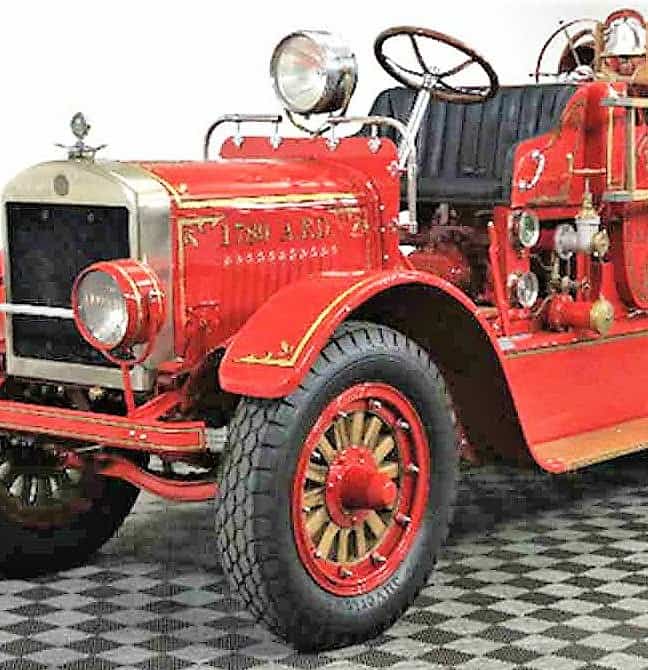 Antique firetrucks are wonderful things, flashy and brassy and honoring brave firefighters who rush into burning buildings to save people. There is a small but dedicated niche of firetruck enthusiasts who love and collect these mammoth pieces of Americana. They all have one thing in common: lots of storage space.

Here in Phoenix, we have the Hall of Flame museum, which despite its quirky name is one of the most-significant collections dedicated to vintage firefighting equipment. It’s open to the public and worth a visit.

The Pick of the Day would fit in well at the Hall of Flame, a rare 1922 Stoughton Fire Engine, which represents the first year that the Stoughton, Wisconsin, company built firetrucks.

This beauty has been completely restored to its original service specs, according to the dealer advertising the Stoughton on ClassicCars.com. It is one of just 14 Stoughton firetrucks known to survive, and the only known model from 1922, the seller says.

“All equipment in photos comes with the truck, including hoses, reels, ax, extinguisher, ladder, siren, flag, bell, etc.,” according to the listing. “Two 3″ binders are included with extensive restoration pictures and detailed documentation on this and the other surviving Stoughton fire trucks. Material includes copies of vintage manuals, parts lists and build sheets.”

This firetruck was in active service for the Dresser, Osceola, Garfield Fire Association in Dresser, Wisconsin, from the 1940s to about 1980, the seller notes, and has been in private hands since. During restoration, the original engine was replaced with a 1936-37 Ford flathead V8, which provides more power than the original, linked with a Borg-Warner four-speed transmission.

Fully equipped with its working water pump, lights and a 1940s electric siren that replaces the hand-cranked original, the Stoughton stands as a fully functional 95-year-old fire engine that could still fight a blaze, if called upon. Additional restoration work recently was completed by Doug Klink of the Reliance Fire Museum to make the truck all ready to roll, the ad says.

This brilliant piece of American history is priced at a modest $28,900, which the seller notes is way less than the cost of restoration. The fire engine looks impressive in the ad’s photos, and most assuredly would be the hit of any Fourth of July parade.