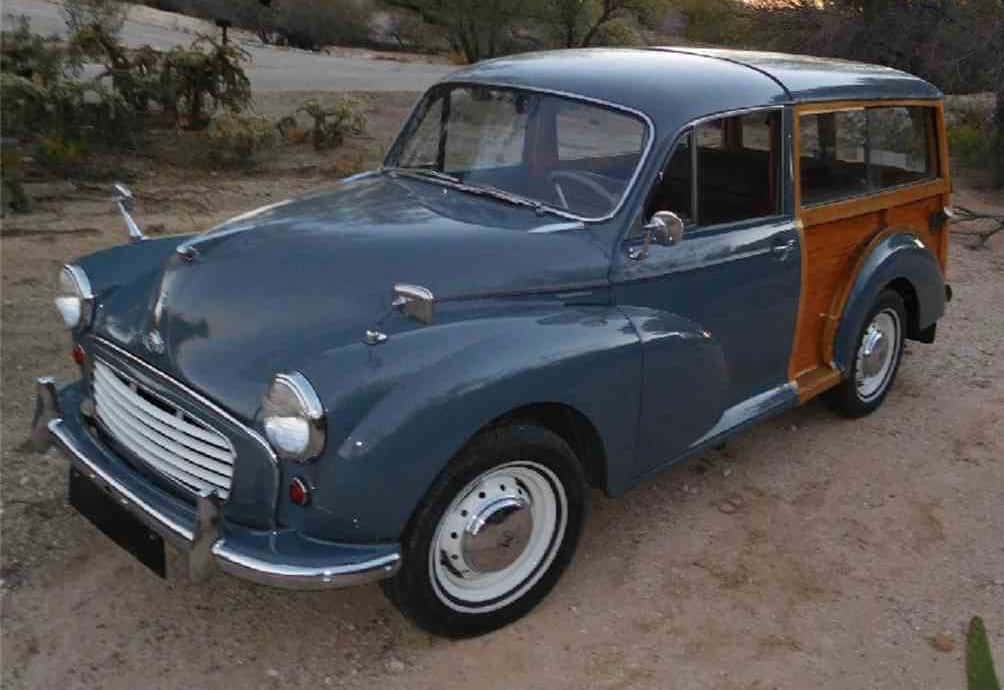 About a decade before he created the Mini, Alec Issigonis designed the Morris Minor, a car produced from 1948 until 1972 and the first British motorcar to exceed 1 million units sold.

Morris Minors were produced as two- and four-door versions, as convertibles, vans and pickup trucks and, as in the case of Pick of the Day, a 1959 Morris Minor Deluxe Traveler, as a station wagon with a wood-framed rear body section and wood rear quarter-panels and rear doors.

Offered by a private owner in Tucson, Arizona, the wagon is equipped with “trafficator” (semaphore) turn signals, a period roof rack, round heater and fan, fender-mounted side mirrors, front and rear ashtrays, and has its original jack and original jack bag.

The advertisement on ClassicCars.com includes extensive photos of the vehicle undergoing a rotisserie restoration, during which it was sand-blasted to bare metal. Photos also show an immaculate vehicle that looks as though it just rolled off a British assembly line.

Well, actually, it appears to be even better finished than it might have been nearly 50 years ago.

“In order to keep the finish accurate and true to English spec, amber spar varnish was used throughout,” the seller says. Also included with the car are two aerosol cans of Frilford Grey and one can of Pearl Grey paint “from the original batch” used in the restoration.

The car also comes with a certified copy of the British Motor Industry Heritage Trust authentication, an original sales brochure, owner’s manual, two workshop manuals and two restoration manuals. Also included a various new and used spare parts (including five wire wheels and a knockoff wrench), a color-coded wiring diagram, the original working radio (which is not installed in the car), and the original gear-shift extension.

Empowering this Traveler is a 948 cc four-cylinder engine much like the original one that back in 1959 was rated at 37 horsepower and was called by Motor Trend magazine a “happy sounding little buzz bomb.” The wagon has a manual gearbox and is pushed around by its rear wheels.