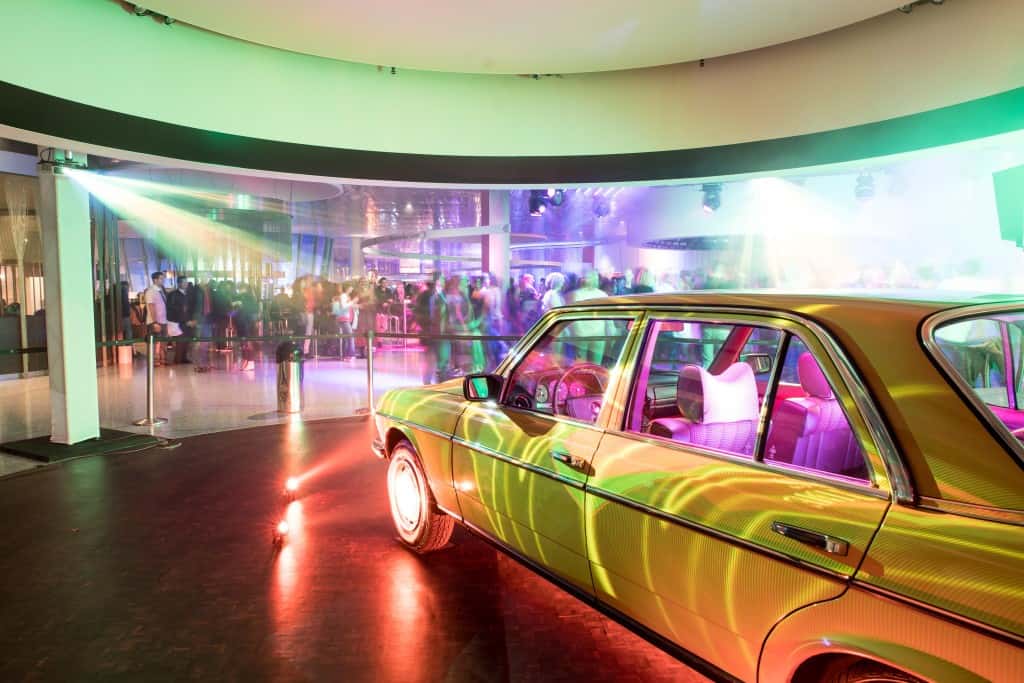 The Mercedes-Benz Museum in Stuttgart, Germany, holds a “Long Night” event March 25-26from 4 p.m. to 4 a.m. The event begins with children’s activities that run until 7 p.m. and include interactive exhibitions where children can design and build cars along with tour the museum.

The “Eve After” starts at 7:30 p.m. and is open until 2 a.m. The special exhibit includes 20 hands-on stations that allow guests to learn about themselves, their strengths, and personalities. Tours of the museum will be offered until 10:30 p.m., followed by an after party featuring music and dancing.

Visitors will be able to shuttle between the Mercedes museum, the Porsche museum, and Stuttgart’s Schlossplatz in vintage cars.

Sunday, the America on Wheels Museum in Allentown, Pennsylvania, holds Movie Day at 1 p.m. and will show ‘The Cannonball Run,’ a story that follows a group of street racers, created in 1981. Then, on April 23, the museum holds its annual Bulldog Beauty Contest from 1-3 p.m.

The Owls Head Transportation Museum is continuing to crowdfund the restoration of the museum’s Red Baron aircraft. It needs considerable repairs to the exterior fabric, body structure, and engine. With a long history of restoring, repairing and even constructing aircraft in its collection, the museum estimates $50,000 is needed to restore the aircraft and thus launched a Kickstarter campaign to crowdfund the project. The campaign has been marked “all or nothing,” meaning the project will only be funded if the $50,000 goal is met by March 23.

The Petersen Automotive Museum plans to honor “The King” Richard Petty, on March 23 by presenting him with the museum’s Robert E. Petersen Lifetime Achievement Award. Event highlights include an auction hosted by Barrett-Jackson. A 2017 Ford Mustang Richard Petty 80th Tribute Edition styled by Petty himself is one of the items to be auctioned, along with a Disney Pixar drawing of Lightning McQueen and Petty, among other items.

March 25, the Auburn Cord Duesenberg Automobile Museum in Indiana hosts a family activity session from 1-3 p.m. where children and an adult can explore the museum as part of a history detective activity. The mission will have participants searching for facts and work with artifacts and documents. The activity is recommended for children ages 8 and up.

The AACA Museum in Pennsylvania plans the “Second Chance Spring Auction,” April 8. The auction will be held from 8 a.m. to noon and features a flea market and car corral. That same day and again on April 15, the museum holds an Easter egg hunt from 11 a.m. to 1:30 p.m. The museum holds a Spring Fling Collectible Toy Show on April 30 from 9 a.m. to 4 p.m.

April 15, the Auburn Cord Duesenberg  Museum’s Cars and Coffee gathering on the Plaza will kick-off the season.

The Blackhawk Museum in Danville, California, holds a Cars and Coffee on April 2, and hosts the Northern California Corvette Association’s 37th “A Legend On Display” Corvette Car Show on April 23.

The National Corvette Museum in Kentucky takes on the Tail of the Dragon during a Museum in Motion tour April 30 to May 3. Shortly after, the museum heads to Seattle for an adventure-filled weekend July 26-30.

The California Automobile Museum takes participants on a scenic road trip to Half Moon Bay with a tour of Bruce Canepa’s exclusive collection.

The LeMay Marymount in Washington State offers driver education in a Ford Model T’s with students touring the historic 88-acre Marymount Military Academy Campus while learning how to drive the Model T. Classes are offered from May through September.

The Mullin Automotive Museum in Oxnard, California, has opened its newest exhibit, celebrating the French automaker Citroën. “Citroën: The Man, The Marque, The Mystique,” features cars from the entire history of the company as well as an in-depth look at founder Andre Citroën. The exhibit runs through the spring of 2018.

The Studebaker National Museum has opened an exhibit, “Sublime Studebakers: The Raymond Loewy Era.” Studebaker became a leader in automotive design under Loewy, who worked with the company from 1938 to 1958 and returned to design the Avanti. The exhibit features archival images as well as original Studebaker design artwork and artifacts which can be viewed through June 4, 2017.

The Smithsonian’s National Museum of American History opened an exhibit February 1 that displays objects that were used during the days of the Black American Racers Inc. The former owner and president Leonard W. Miller and former members of BAR donated clothing, race victory trophies and awards, as well as the iconic steering wheel from the Formula Super Vee driven by the late BAR driver Tommy Thompson.

The Auburn Cord Duesenberg Automobile Museum in Auburn, Indiana, is continuing the third segment in the museum’s Curatorial Spotlight series with “Bonnell Souder” presented by Chelsea Dant from the Willennar Genealogy Center. The presentation will take place on March 21 at 6 p.m.

The Gilmore Car Museum in Hickory Corners, Michigan, continues its annual lecture series on Sunday at 3 p.m. with William Hentges, automobile/aviation button collector and author, presenting “Quicksand: Speed Is Born;” followed by “Around Nova Scotia by Locomobile” presented by David Lyon, author and historian, on March 19; “Lincoln Carrera Pan-American Racing of the Early 1950s: The Ray Crawford Story” presented by Andrew Layton, a racing historian and author, on March 26.

The British Motor Museum holds a “Cars Through the Lens” photography workshop March 18, followed by “Lights, Camera… Cars” the following day. Each workshop will be led by Lara Platman, who will teach participants how to use their camera settings, basic light and composition, the rule of thirds, and other essential techniques.

The Blackhawk Museum continues its speaker series March 25 with Marshall Buck, known for his expertise in building detailed custom cars. His presentation will be on “The Art & Craftsmanship of Automotive Model Building,” which will cover some of what goes into the making of one-of-a-kind scratch-built models, as well as making the masters for his limited-edition hand-built pieces. Following Marshal Buck in the museum’s speaker series will be Chris Bock, the Pebble Beach Concours Chief Judge, on April 8 to discuss “The World’s Greatest Concours.”

The National Automobile Museum in Reno, Nevada, offers a history symposium, “The 1970s: Activism: Voices for Change,” on April 26-27, from 4 p.m. – 9 p.m., and on April 29 from 8:30 a.m. to 5:45 p.m. The discussion will feature national speakers, historians, authors and local scholars will present on a wide variety of topics such as the Iran hostage crisis, foreign policy, the impact of the ’70s on our modern day world, the auto industry and even a humorous look at the decade’s culture, including fashion