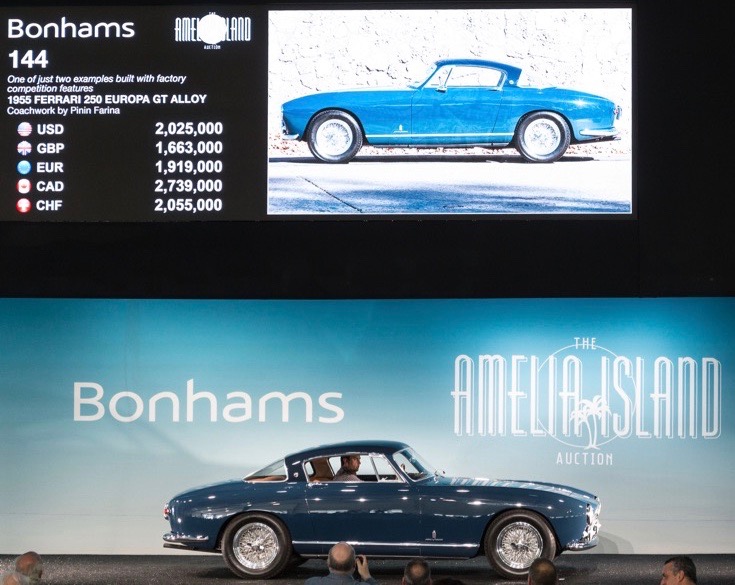 Of more than 550 vehicles crossing the blocks, about 365 sold, an overall sell-through rate of 67 percent.

RM Sotheby’s news release noted that it not only had its best sale on Amelia Island, but that its $70.9 million in sales “comfortably exceeds the combined total of all the other auctions held during this year’s Amelia weekend.”

RM Sotheby’s expanded its sale to two days this year, offering 63 cars from the Orin Smith collection, 62 of them offered with no reserve price. The collection generated $31 million in sales, with all 63 cars going to new owners.

We are definitely seeing a market shift, which is healthy for the marketplace as a whole,”

Over the course of two days, RM Sotheby’s 19 cars sold for $1 million or more. The auction house said it had bidders from 25 countries, and that 21 percent of the bidders were first-time clients.

RM Sotheby’s next sale is scheduled for May 27 at Villa Erba, Italy, during the Concorso d’Eleganza Villa d’Este weekend.

Gooding & Company posted a 78 percent sell-through and more than $30.5 million in sales, with nine cars selling for $1 million or more. Gooding also claimed 13 world auction records for specific models on its docket.

“In spite of the 13 world record prices set, we are definitely seeing a market shift, which is healthy for the marketplace as a whole,” company founder David Gooding was quoted in his company’s post-sale news release.

Gooding’s next sale is scheduled for August 19-20 at Pebble Beach, California.

Although Bonhams’ sale generated only $10.2 million in sales, it posted an impressive 87 percent sell-through rate

“By the time we finish the first quarter of 2017, the Bonhams motoring team will have conducted five auctions in four countries and our healthy sell-through rate to date demonstrates Bonhams’ on-target position and an active market at all levels,” Jakob Greisen, Bonhams’ vice president of U.S. Motoring, said in the company’s news release.

Bonhams next sale takes place Sunday at the Goodwood Members’ Meeting in England.

As far as we can tell, neither Motostalgia nor Hollywood Wheels has produced a post-sale news release with official results.

Motostalgia did report on its website total sales of $4.7 million, with much of that coming from the $1.001 million paid for a 1950 Cisitalia Abarth 204A Motoposto racing car.

In preliminary reporting by Hagerty, the insurance and vehicle valuation-tracking company, Hollywood Wheels’ sale had only a 28 percent sell-through and $4.2 million in total sales.