Granddaughters go to auction to reclaim a family heirloom 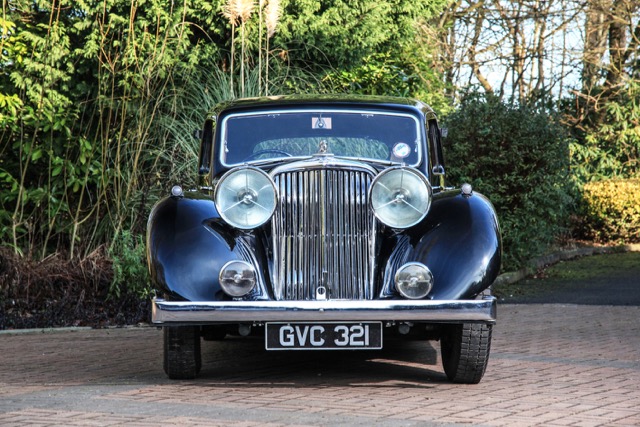 After discovering that their grandfather’s 1948 Jaguar was going to auction earlier this month at the Historics at Brookland sale, Lucy, Sally, Sarah and Charlotte outbid all others to claim the car. Well, actually to reclaim the car.

You see, this wasn’t just any 1948 Jaguar Mk. IV saloon. The girls’ grandfather was Arthur Whittaker, deputy chairman of the British automaker, and this had been his car, which they were bringing home 67 years after he’d last driven it.

The girls, well, now women, learned by happenstance, and only two weeks before the auction, that their grandfather’s car was being auctioned. They paid £70,000 ($85,150) to bring the jet-black Jag back to the family’s home in Kenilworth, only a few miles from the Jaguar factory at Brown’s Lane, Coventry, where it rolled off the assembly line 69 years earlier.

“Once we discovered grandad’s Jaguar was for sale, we just had to go and see it,” Sally said in a news release from the auction company. “We had no intention of buying it, but sitting in it before the sale brought back so many fond memories of family outings in his cars that we decided we just had to bid for it.”

“We’d never bought a thing at auction before, but were determined to take it home if we could afford to,” Lucy added.  “It was all a bit of a whirlwind and suddenly, the hammer came down and it was ours.”

After Whittaker parted with the car in 1950, it passed through several owners before a complete and meticulous restoration was undertaken in 1982. That restoration finally was completed 22 years later by Jaguar specialist David Davenport, returning the car to what Historics at Brooklands termed “spectacular” condition.

Whittaker’s car was one of the last produced that model year and was specially trimmed in pigskin hide and with a sunroof.

And what do the new owners plan for the family heirloom?

“It’s just too lovely to leave locked away,” one of the granddaughter’s said. “The plan is to share enjoyment of the car amongst all our families, including grandad’s seven great grandchildren.  I’m sure that’s what he would have wanted too.  All we need now is the picnic hamper and a bit of sun!”