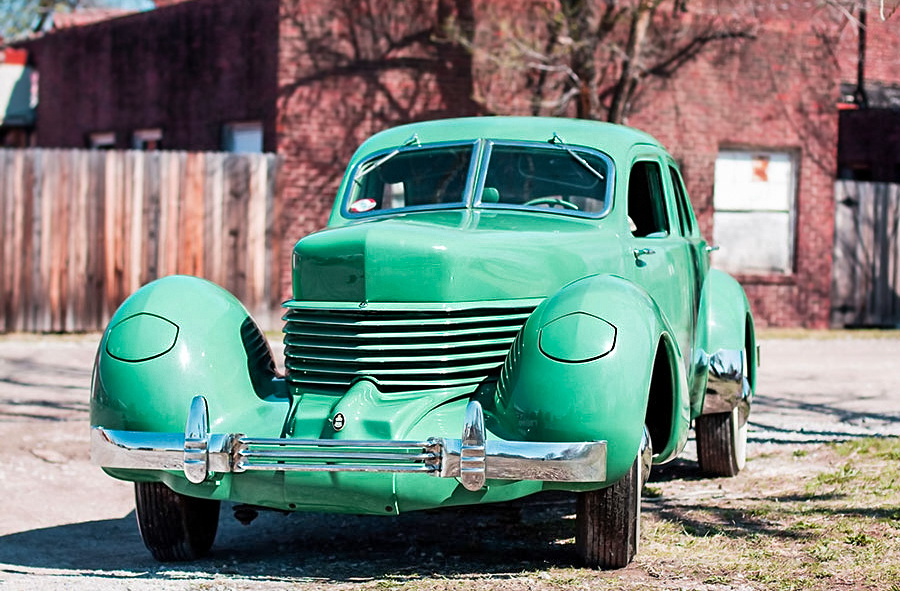 Sometime is the 1960s, a Tulsa, Oklahoma, salesman purchased the 1937 Cord 812 Westchester that is being offered during the Spring Branson auction, set for April 21-22 at the Branson Convention Center in Missouri.

The Cord features a bolt-on trunk, a very rare option that is known to only have appeared on a second car that was built for E.L. Cords wife. Other unique features include the radio head in the dash and the Cord-exclusive green exterior paint, which is highlighted by the cloth interior’s darker two-tone greens.

Upon obtaining the car, the salesman started restoring it using new-old-stock parts from the  Auburn Cord Duesenberg Company, which had been relocated to Broken Arrow, Oklahoma, after it was acquired by an Oklahoma school teacher.

The restoration was completed in 1983 and the car was driven a little over 60 miles before it was put into storage until this year.

The auction house is one of the longest-running classic car sales in the U.S., staging events twice a year for the last 39 years.

“It’s the Midwest auction for collectors that typically own one or two classics,” Jim Cox said.

Around 5,000 consigners, bidders and spectators typically attend the sales. The spring sale this year figures to include around 300 cars.

Along with the 1937 Cord 812 Westchester, other significant vehicles expected to cross the block include a 1932 Ford roadster.

Power is provided by a built 355 Chevrolet full-roller engine coupled to a Muncie 4 speed transmission.

Additionally, a 1940 Chevrolet two-door deluxe street rod is set to cross the block without reserve. The car was fully updated in March 2015 and fitted with a Jasper 350 LT1 engine that has been driven less than 1,000 miles. The engine comes with a transferable 3-year or 100,000-mile warranty.

A 1953 Packard Caribbean Convertible in rare Ivory paint is to be offered as well as a 1956 DeSoto Firedome station wagon. The Caribbean convertible comes equipped with every available option, including ultramatic transmission, hydraulic windows, seat, power top, steering, and brakes are also included.

The DeSoto is Hemi powered and was formerly owned by Illinois Congressman Ken Gray.

To register as a bidder or consign a car, see the Branson Auction site for more details.