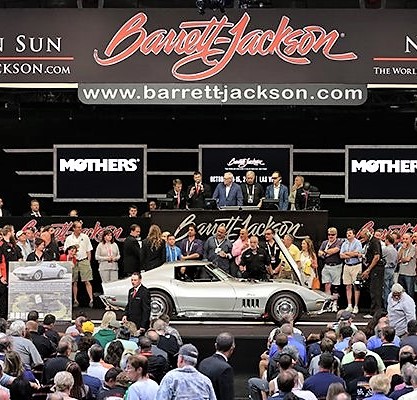 Barrett-Jackson, which held its first auction in the Northeast U.S. in June 2016, has signed on as the presenting sponsor for the inaugural New England Concours d’Elegance, to be held June 18 at the Mohegan Sun Resort and Casino in Connecticut.

The new concours, and its road tour the following day, take place just prior to Barrett-Jackson’s second collector car auction, set for June 20-24 and also at the Mohegan Sun facility.

“Barrett-Jackson’s title sponsorship means so much to the show and to me personally,” John W. Lyons, founder and chairman of the New England Concours, said in a news release. “They’re supporting not just a charitable event for the car enthusiast community, but also championing a meaningful economic and social event for the Northeast.”

Barrett-Jackson’s title sponsorship means so much to the show…”

The New England Concours events start Saturday, June 17, when it hosts a 300-vehicle car show on the resort’s Turtle Lot with entries that include muscle cars, classics and customs. The main concours takes place Sunday, June 18, with a prized selection of 100 vintage automobiles vying for awards. On Monday, June 19, there will be a road tour through the surrounding scenic area for the concours vehicles.

Barrett-Jackson, headquartered in Scottsdale, Arizona, holds four auctions per year. Besides the Mohegan Sun event, the auction house conducts its signature home-base sale in Scottsdale every January; its Palm Beach, Florida sale every April; and its Las Vegas sale in the fall.

“It is evident from the unprecedented response to our inaugural Northeast Auction at Mohegan Sun in 2016 that Barrett-Jackson is a perfect fit for the region,” auction chairman and CEO Craig Jackson said in the news release. “Serving as presenting sponsor of the New England Concours d’Elegance is just one more way we can share our passion for the collector car hobby in this part of the country.”