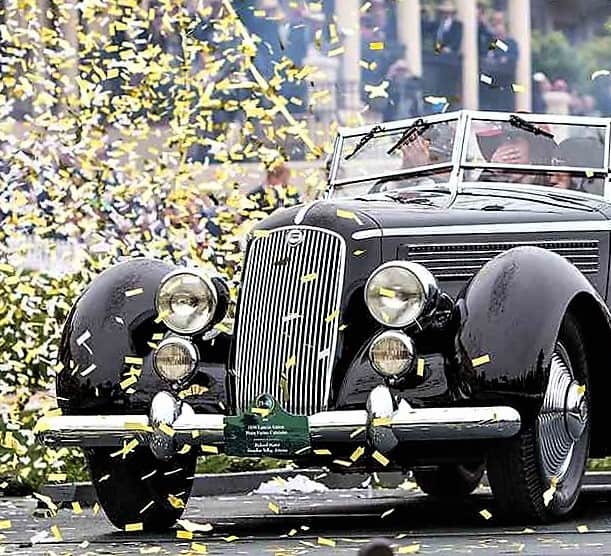 With the Amelia Island Concours d’Elegance taking place this coming weekend, the Pick of the Day is a magnificent piece of concours royalty: the very 1936 Lancia Astura “Tipo Bocco” that won best of show at the 2016 Pebble Beach Concours d’Elegance.

This was the car driven across the Pebble Beach reviewing stand to a blast of pyrotechnic confetti and the cheers of thousands of spectators, the car chosen from among the hundreds of wonderful vehicles parked on the 18th fairway to be honored with this most prestigious of awards.

The lovely Pinin Farina-designed (and at one point, restored by some of the same artisans who originally built it) Lancia convertible also has another piece of royalty in its storied past; it was once owned by rock n’ roll guitar legend Eric Clapton.

The Lancia is advertised on ClassicCars.com by a high-end collector car dealer in St. Louis, Missouri, which expounds at length in the ad about the car’s remarkable history. Renowned in its day for streamlined elegance, the Astura fell off the map for a number of years until being rediscovered in 1962 by a 20-year-old Lancia enthusiast, Michael Scott, who dragged its weathered remains out from under a hedge after paying a grand total of 15 pounds sterling for it, the dealer recounts in the ad.

Scott, who was eager to properly restore the car. was friends with a well-known writer for Autocar magazine, Steady Barker, also a Lancia fanatic. Barker showed photos of the project to none other than its designer, Batista “Pinin” Farina, who agreed to restore the body of the car at his facility in Italy at no charge if Scott had it mechanically refurbished, the ad says.

The Astura is one of six built, each slightly different

“This astounding gesture showed not only how proud Farina was of his design but also his deep, heartfelt fondness for the Lancia marque, a canvas where he created some of his finest work,” according to the ad. “Michael Scott lived up to his end of the bargain and spent considerable sums for the day rebuilding the 2.9-liter narrow-angle V8 and restoring the chassis.

“More than a year later, the Astura had a fresh MOT (British registration) and 1,000 flawless test miles under its belt. Steady eloquently described the car as ‘sound in wind and limb but shabby as a tramp’ as Scott and a friend set off for Italy.”

True to his word, Farina brought the Astura back to perfection, and Scott retained it for many years with the intention of keeping it forever. But thing changed in his life and Scott needed to sell the car. After offering it back to Farina’s business, which was unable to consummate the deal, Scott sold it to Clapton in 1976 for $10,800 pounds sterling.

Although a devoted Ferrari fan, Clapton reportedly was psyched by the Lancia, driving it and showing it and regaling it with praise. He eventually sold it to the original design house, now named Pininfarina, which displayed it for decades in its collection.

The dealer offering the Lancia acquired it about seven years ago and sold it to its current owner, an Arizona collector who had the privilege of receiving its best-of-show award at Pebble Beach. Now the dealer is again listing the car for sale, obviously still in immaculate show condition since it just won Pebble Beach.

As for the price tag, the dealer asks  prospective buyers to contact the dealership for details. But be certain that it is an amount to make your heart race and your eyes water and, for anyone lucky enough to afford it, tap into the old trust fund or your kids’ inheritance.