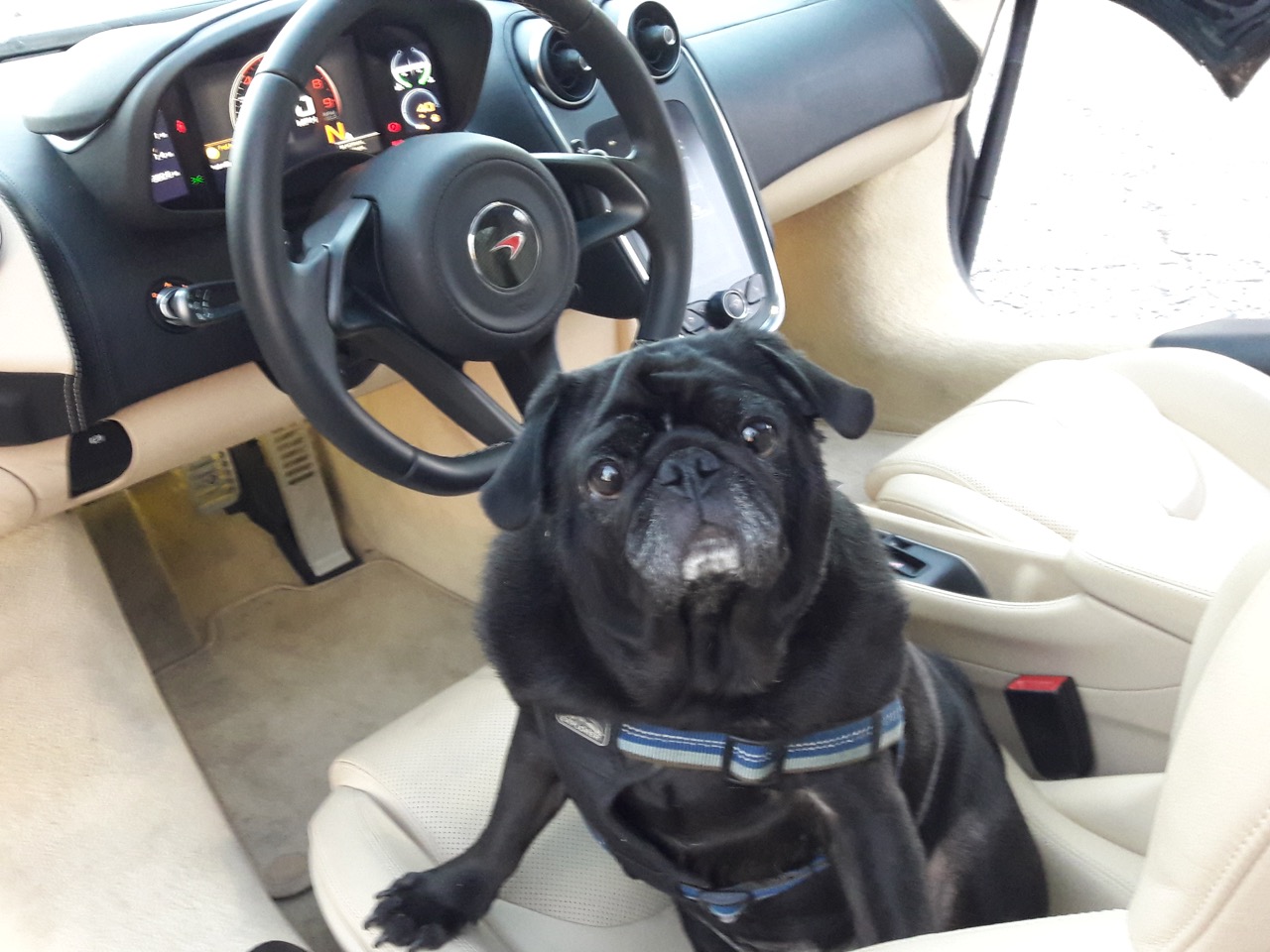 McLaren wants to prove it has a softer side, even if a howling mid-engine supercar seems an ironic choice when trying to drive the point home.

As the British sports car company’s least expensive offering, the 570 GT also has been dialed in to provide a quieter and more comfortable driving experience. Even the cargo bay has been reconfigured to accommodate a moderate amount of luggage. The glass hatch swings open to reveal the “touring deck” which, we admit, sounds classier than simply “trunk” or “luggage bay.”

You might still be dubious. How can a car with 562 horsepower, room for only two onboard, and a starting price of nearly $200,000 qualify as a calmer, more practical means to get around?

So, to help McLaren in its efforts to soften its image, we’ve enlisted the help of a special friend. Merlin, an 8-year-old pug who is a certifiable expert in automobiles, at least when it comes to sleeping (and snoring, loudly) in some of the world’s finest examples.

During his ongoing tenure as my four-legged companion, he’s been a passenger in wild rides that have included everything from a Lamborghini Aventador and Mercedes-Benz SLS AMG GT to Dodge Vipers and Hellcat Challengers, not to mention Nissan GT-Rs, a pair of BMW i8s, and a Maserati Quattroporte, to name just a few.

When it comes to cars, Merlin’s a tough one to impress.

As for myself, I remained skeptical about the 570 GT being some sort of an everyday supercar. Granted, based solely on the spec sheet, things look promising.

McLaren softened the 570 GT’s double-wishbone suspension by 15 percent at the front and 10 percent at the rear. The hydraulically assisted steering has been dialed back, slightly, to provide smoother inputs and directional changes. That translates to slower steering, though all things are relative here. This still feels like a manic sports machine, one that will rocket from 0 to 60 miles per hour in roughly 3.4 seconds. Top speed is reported to be 204 mph.

You’d never accuse the 570 GT of being shy when it comes to design, either. Despite having that side-hinged rear cargo hatch and an extra few cubic feet of luggage space, this machine hits all the right buttons when it comes to Supercar Style: 101. It sits low to the ground and every fluidly sculpted panel and intake draws your eyes along the car’s surface.

McLaren’s skyward-reaching dihedral doors are present, too. Unlike similarly upward-swinging portals found on rivals – like the BMW i8 or the departed Mercedes-Benz SLS AMG – the 570 GT’s doors requite a good amount of real estate when opened or closed. In other words, be careful where you park.

On the road, however, we’re not worried about door dings or valet mishaps. The 570 GT might be the gentlest plaything in McLaren’s toy chest, but it should still come with a big red warning label. True to the marketing message, the steering is direct but not hyperactive. There is honest feel as to what the front wheels are doing and, if you’re brave enough, the car’s near-perfect front and rear weight balance keys you into the car’s ultimate limit of adhesion.

We got the McLaren wriggling on a closed course, in a mixture of damp but drying conditions. The main thing to watch out for is turbo-lag from the 562 horsepower, 3.8-liter, twin-turbocharged V8 mounted behind your back, snuggled deep in the carbon-fiber “MonoCell” tub.

This central chassis weighs only 176 pounds and, unfortunately, McLaren has done such a fine job putting the motor as low in the car as possible, viewing the engine is next to impossible unless you have special tools – and the urge to start taking apart a $200-grand supercar that doesn’t belong to you.

The 7-speed gearbox rips through the gears on its own, or you can take control with the paddle shifters mounted behind the steering wheel. A massive set of iron disc brakes (14.7 inches in diameter at the front, 13.5 at the rear) is tucked behind the thin, multi-spoke alloy wheels. Those stoppers are also available in carbon ceramic, though the standard units are fine unless you’re headed to a track on a regular basis.

Merlin wasn’t present for the track portion of our adventure, but he most certainly clambered aboard to run errands and see if the 570 GT lives up to the usable-supercar hype. Ironically, the car’s low height allowed him to climb in and out of his own accord. Score one point for McLaren, via Merlin.

The good news is that the McLaren’s ride is generally docile, unless the pavement is extremely rutted and full of potholes. In the New York metro area, that’s a common occurrence, so extra care is needed to avoid wrecking one of those lovely alloys (19-inch front, 20 rear). The pitter-pat of McLaren wheels on rutted roads wasn’t exactly to Merlin’s liking, either. A Corvette or Porsche 911 would be much easier on your backside, that’s for certain.

Squeeze the gas pedal and the turbocharged V8 starts to howl, though it’s not too bombastic unless you’re truly flooring it. On public roads, that’s next to impossible, considering how much performance is available.

At its best, this McLaren offers about 80 percent of the comfort you’d find in sports/luxury coupe – albeit ones costing about half the price. On the flip side, the 570 GT happens to have about 90 percent of the performance offered by the world’s finest exotics – including some that cost nearly double the McLaren’s price-tag.

Where does that leave us?

As a mega-machine with looks to match, the McLaren 570 GT offers supercar thrills with a dollop of refinement that could, theoretically, make this one hell of a commuter car, or a great weekend getaway car that lets you pack more than your (thick) wallet. It’s a dream machine, with a small dose of reality added into the mix.

Is this the warmer and fuzzier side of supercar ownership? Not exactly. That is, unless your co-pilot happens to be warm and particularly fuzzy, too.