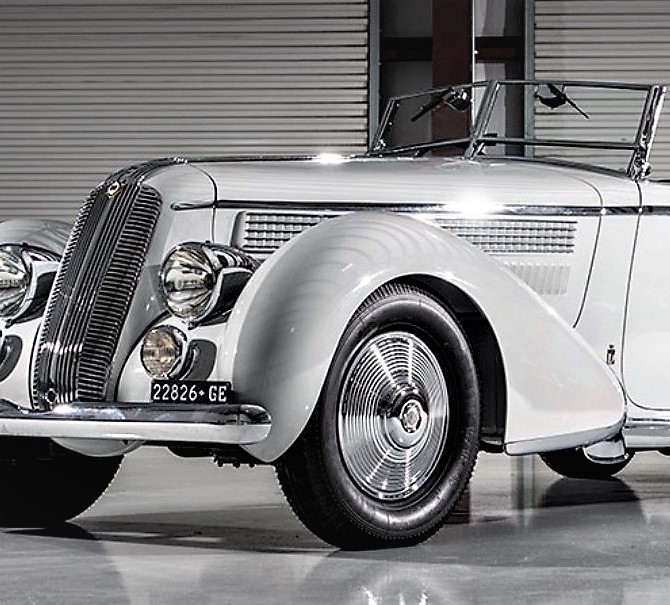 Orin Smith was known as a consummate collector of fine automobiles, a man of means with an eye for beauty and a flair for living life to the fullest. During 20 years of collecting and restoring classic cars, and compiling an enviable assortment of concours trophies, Smith gathered together a large and carefully curated group of impressive vehicles, many of them special or unique examples from the world’s greatest marques.

Smith, 81, passed away in August 2016, and his family has opted to consign his collection to RM Sotheby’s, an auction house with which he had a close connection. Fifty-eight of Smith’s cars will be offered at RM Sotheby’s upcoming auction on Amelia Island, Florida.

Smith focused on special Rolls-Royces and Bentleys, such as the Rolls ‘Honeymoon Express’

The size and scope of Smith’s collection prompted RM Sotheby’s to make an unprecedented decision. Instead of the customary one-day Amelia sale prior to the Amelia Island Concours d’Elegance, a two-day auction will be held Friday, March 10, and Saturday, March 11, with the first day dedicated to the Orin Smith collection. The concours takes place March 12.

The extra day has been given a name commensurate with the occasion: “A Gentleman’s Collection: The Pride and Passion of Orin Smith.” The auction will be rich with coachbuilt Rolls-Royce and Bentley automobiles, as well as some spectacular cars from such brands as Aston Martin, Packard, Fiat, Lancia, Allard, Jaguar, Alfa Romeo and Mercedes-Benz.

And adding to the allure of the single-collection sale, all but one of the cars will be offered without reserves.

“No reserve makes it a very special sale and should gain it a lot of attention,” Don Rose, car specialist for RM Sotheby’s, told The Daily News @ ClassicCars.com “It should be exciting.”

Rose, who said he knew Smith well and was instrumental in some of his vehicle acquisitions, described him as “a charming man who was always fascinating to talk to, who treated everybody with respect and was reflected in his unwavering good taste.”

Smith and his wife, Dr. Stephanie Bennett-Smith, were residents of Vero Beach, Florida and regulars at RM Sotheby’s Amelia Island auction, as well as the Amelia Island Concours.

Smith, a Navy vet, was a highly successful business leader who retired in 2000 as chairman and chief executive of the Engelhard Corporation. He had “a sort of swashbuckling past” as a speedboat racer and other forms of boating, Rose said, but then turned to collecting show cars, mainly focusing on those from Rolls Royce and Bentley.

“The core of the collection is coachbuilt Rolls and Bentleys,” he said. “There’s nothing ordinary in the Rolls/Bentley side of the equation at all. We have rare one-offs, everything was built by famous coachbuilders. All of them are concours quality.”

“If there is a unifying theme, it’s beauty; Orin had a sharp eye for cars that are beautiful,” Rose said. “There are cars that he would take to the top concours in the world. And he had an open checkbook to make them the best. He was very competitive with his cars and with being a concours participant.”

The one car in The Gentleman’s Collection that will carry a minimum reserve price is a rare piece of Italian splendor, a 1936 Lancia Astura Cabriolet III “Tipo Bocca” that was an early design by Battista “Pinin” Farina. One of just six in long- or short-chassis form, this is one of three short-wheelbase convertibles. The estimated value is $2 million to $2.6 million.

“One of the long-chassis Asturas won best of show at Pebble Beach (Concours) last year,” Rose noted. “That has a back seat. The short wheelbase is a two-passenger car, so it’s sportier. It’s in the top rank of Italian pre-war cars.”

Another great Lancia is a Jet Age special, the 1953 Lancia Aurelia PF200 C Spider, also by Pinin Farina. The famous convertible sports a grille inspired by a turbine engine from a time when jet-fighter aircraft held the popular imagination. Just seven were known to be built. It’s value: $ 1.1 million to $1.4 million.

“This was Fiat’s attempt to get back into the high-end market,” Rose said. “(The 8V chassis) was bodied by various Italian coachbuilders. The Supersonic was built by Ghia. It’s an absolutely stunning car and famous, certainly the most-famous post-war Fiat-powered car.”

Among the 13 coachbuilt Rolls-Royces are a 1914 Silver Ghost tourer by Hemmings, a sporty 1959 Silver Cloud I drophead coupe by James Young, a streamlined 1948 Silver Wraith Cabriolet by Franay, a 1934 Phantom II Continental Drophead Sedanca Coupe by Gurney Nutting and a 1929 Phantom I Henley roadster by Brewster.

A standout in the Rolls group is known as “The Honeymoon Express.” A 1958 Silver Cloud I drophead coupe, it carries unusual two-seater coachwork with an oversized trunk, coachbuilt by Freestone & Webb. Just two were built.

“It was made for two people and a week’s worth of luggage,” Rose said. “Probably the most outrageously styled Rolls of the post-war period. A very striking and dynamic-looking car. It’s black over dark green with a saddle-tan interior, rock-star colors. It’s an amazing thing.”

The selection of coachbuilt Bentleys include some awesome rarities, such as the 1952 Bentley R-Type Continental fastback sports saloon by H.J. Mulliner. A lightweight alloy-bodied version of the shapely sedan, this was a performance version of which only 207 were built, and this is one of just 43 with left-hand drive.

The hand-built Bentley “was the most expensive production car in the world at the time, over $20,000,” Rose said. “It was driven by heads of state, captains of industry, celebrities. Briggs Cunningham had one. It was sort of the sporting gentleman’s car. It had performance but the presence and comfort of a long-distance touring car.”

Other Bentleys on the docket include three S1 Continentals, a 1956 drophead coupe by Park Ward, a 1957 fastback sports saloon by Mulliner and a 1958 fixed-head coupe by Park Ward. There’s a 1947 Mark VI Cabriolet, one of two bodied by Franay, and an evocative replica of the iconic 1931 “Blue Train” Special built for period accuracy by Bob Petersen Engineering.

1939 Packard One Twenty styled by Darrin

There are three fine Packards, including a sharp 1939 One Twenty styled by Darrin, and six fantastic Aston Martins, ranging from a 1938 15/98 Short-Chassis Open Sports through a 2006 DB9 Volante that was driven by Smith’s wife.

The Astons include a significant and rare model, a 1966 Short Chassis Volante, which was an “interim” convertible that bridged the DB5 with the longer DB6 models. The first convertible to use the Volante name, the car helped Aston use up 37 leftover DB5 chassis while creating a memorable model that today is valued at $1.6 million to $2 million.

The Smith collection includes many other significant cars, as well as a jewel-like Italian economy car, a 1952 Fiat 500 C Topolino Transformable that Rose said is in as splendid condition as any of the Rolls or Bentleys. A reflection of Stephanie Bennett-Smith’s love for little cars, it’s valued at $40,000 to $50,000.

“It’s a very nice car; the cost of restoration certainly exceeded the cost of the car,” Rose added.

RM Sotheby’s auction of Orin Smith’s cars on March 10 will be followed March 11 by the annual sale of top-drawer collector cars, with 97 vehicles on the docket. The sale will open with an automobilia auction. For information, visit the auction website.